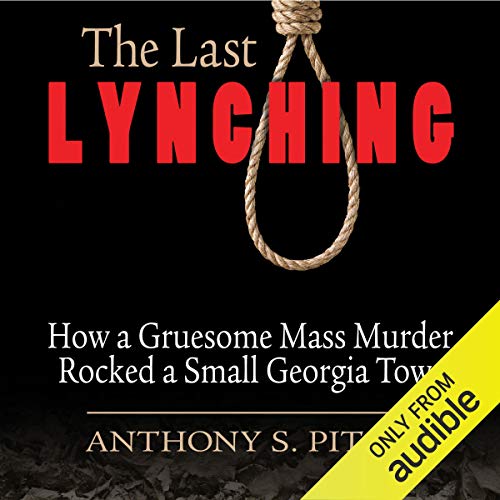 Nothing casts a more sinister shadow over our nation's history than the gruesome lynchings that happened between 1882 and 1937, claiming 4,680 victims. Often, in a show of racist violence, the lynchers tortured their victims before murdering them. Most killers were never brought to justice; some were instead celebrated as heroes, their victims' bodies displayed or even cut up and distributed as trophies.

Then, in 1946, the dead bodies of two men and two women were found near Moore's Ford Bridge in rural Monroe, Georgia. Their killers were never identified. And although the crime reverberated through the troubled community, the corrupt courts, and eventually the whole world, many details remained unexplored - until now.

In The Last Lynching, Anthony S. Pitch reveals the true story behind the last mass lynching in America in unprecedented detail. Drawing on some 10,000 previously classified documents from the FBI and National Archives, Lynched paints an unflinching picture of the lives of the victims, suspects, and eyewitnesses and describes the political, judicial, and socioeconomic conditions that stood in the way of justice. Along the way, The Last Lynching sheds light into a dark corner of American history that no one can afford to ignore.

Skyhorse Publishing, as well as our Arcade imprint, are proud to publish a broad range of books for listeners interested in history - books about World War II, the Third Reich, Hitler and his henchmen, the JFK assassination, conspiracies, the American Civil War, the American Revolution, gladiators, Vikings, ancient Rome, medieval times, the old West, and much more. While not every title we publish becomes a New York Times best seller or a national best seller, we are committed to books on subjects that are sometimes overlooked and to authors whose work might not otherwise find a home.

What listeners say about The Last Lynching

This is so well written and narrated. A story that has to be told again and again.

The most accurate Book I've heard about this tragedy. Sickening those responsible haven't been caught.

I knew this would be a tough listen.. and it was! This is the type of true story that makes you angry and want to hurt the offenders! As difficult as it is to hear, it must be told. Americans need to know and believe the horrors of the past.