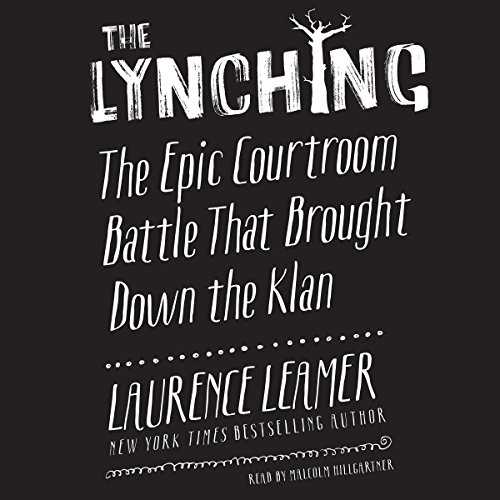 By: Laurence Leamer
Narrated by: Malcolm Hillgartner
Try for £0.00

The New York Times best-selling author of The Kennedy Women chronicles the powerful and spellbinding true story of a brutal race-based killing in 1981 and subsequent trials that undid one of the most pernicious organizations in American history - the Ku Klux Klan.

On a Friday night in March 1981, Henry Hays and James Knowles scoured the streets of Mobile in their car, hunting for a black man. The young men were members of Klavern 900 of the United Klans of America. They were seeking to retaliate after a largely black jury could not reach a verdict in a trial involving a black man accused of the murder of a white man.

The two Klansmen found 19-year-old Michael Donald walking home alone. Hays and Knowles abducted him, beat him, cut his throat, and left his body hanging from a tree branch in a racially mixed residential neighborhood. Arrested, charged, and convicted, Hays was sentenced to death - the first time in more than half a century that the state of Alabama sentenced a white man to death for killing a black man. On behalf of Michael's grieving mother, legendary civil rights lawyer and cofounder of the Southern Poverty Law Center Morris Dees filed a civil suit against the members of the local Klan unit involved and the UKA, the largest Klan organization. Charging them with conspiracy, Dees put the Klan on trial, resulting in a verdict that would level a deadly blow to its organization.

Based on numerous interviews and extensive archival research, The Lynching brings to life two dramatic trials, during which the Alabama Klan's motives and philosophy were exposed for the evil they represent. In addition to telling a gripping and consequential story, Laurence Leamer chronicles the KKK and its activities in the second half the 20th century and illuminates its lingering effect on race relations in America today.

What listeners say about The Lynching

The Lynching was not what I expected, which was a longer and possibly sensational court trial. Instead, it is a very readable history of the civil rights movement in Alabama. Yes, it reports the murder of an African-American teen in Mobile in the 1980's and how justice was finally accomplished and how that led to the demise of the Klan. It does so much more than that because it recounts the fear the white supremacists caused and the struggles of the movement in the 1960's, thus putting the murder in context. The reader can learn about George Wallace, Morris Dees, the Southern Poverty Law Center, the UKA, and more. Parts of this book reminded me of today's political environment. It may shed some light on the appeal of a certain kind of political machinations.

I would hope that those whose knowledge of this part of U.S. history is vague would turn to this book as a good way to become better informed. As racial tension still is with us, we owe it to our country and to each other to be well-informed about what has gone before us. This book is a rather painless way to learn for the book holds the reader's attention. The audio version is well narrated. I recommend it.

Fascinating story of one of the seminal events of the Civil Rights struggle.

Like all Leamer's books, thoroughly researched and detailed, yet reads like a suspense novel. Narration is very good. Hard to stop listening.

A detailed account that is entirely enlightening! The whole is a thorough narration of a timelessly relevant case even in our 21st century. This is one I highly recommend. 🤸🥇📖

I loved the history portrayed in this story. I could not stop listening. I for sure learned something that I had once read about. I have a new respect for the history of Alabama.

Very interesting story that illuminates the civil rights struggle- shocking to learn the details of segregation in the south.

A surprising account of a lynching in Alabama as late as 1981. The early racist history of and later rehabilitation of Morris Dees, who became the founder of the Southern Poverty Law Center is an unexpected twist.

Part II felt a little long winded and disjointed. overall, it was a fascinating chapter of Civil Rights History that I was not familiar with.

Good. Just Not THAT Good

The narration was good. This was easy reading, mostly held my interest as I looked forward to learning more about an era that I already knew. I came away from the story feeling as if it wasn't quite finished, i.e. there's much more not said than said. Maybe my expectations were too high but I felt slightly disappointed with it overall.

An outstanding narrative on some of our ugliest , American History. It's important that current, and future, generations know this in order to avoid its recurrence.