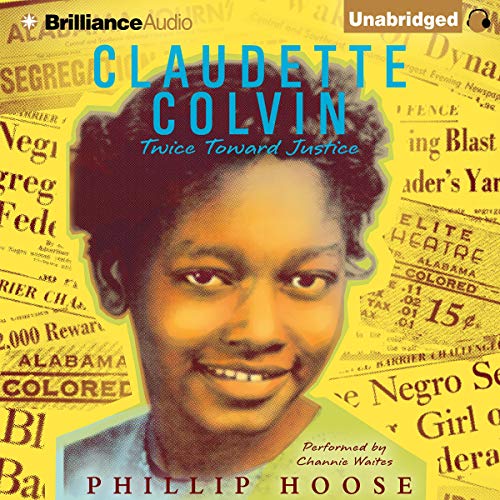 By: Phillip Hoose
Narrated by: Channie Waites
Try for £0.00

On March 2, 1955, a slim, bespectacled teenager refused to give up her seat to a white woman on a segregated bus in Mont-gomery, Alabama. Shouting "It's my constitutional right!" as police dragged her off to jail, Claudette Colvin decided she'd had enough of the Jim Crow segregation laws that had angered and puzzled her since she was a young child.

But instead of being celebrated, as Rosa Parks would be when she took the same stand nine months later, Claudette found herself shunned by many of her classmates and dismissed as an unfit role model by the black leaders of Montgomery. Undaunted, she put her life in danger a year later when she dared to challenge segregation yet again - as one of four plaintiffs in the landmark busing case Browder v. Gayle.

Based on extensive interviews with Claudette Colvin and many others, Phillip Hoose presents the first in-depth account of a major, yet little-known, civil rights figure whose story provides a fresh perspective on the Montgomery bus protest of 1955 - 56. Historic figures like Martin Luther King, Jr., and Rosa Parks play important roles, but center stage belongs to the brave, bookish girl whose two acts of courage were to affect the course of American history.

"While virtually all students know Rosa Parks's story, this well-written and engaging book will introduce them to a teen who also fought for racial justice and give them a new perspective on the era." ( School Library Journal)

What listeners say about Claudette Colvin

The funny yet touching story of women leders!

Would you listen to Claudette Colvin again? Why?

I would listen to this book again because it was empwering to women all over the world.

I liked how the woman took action first and that she was a student and not an adult.

The part that moved me the most was when she stood up for her own rights and for blacks all over the south.

This is one of the best books that I have ever read (after the Hunger Games)!

An unsung Hero in the Civil Rights Movement.

Would you listen to Claudette Colvin again? Why?

I would listen the the book again because it helped me understand the Civil Rights movement and and the value one person can contribute to a cause.

I very much appreciated the fact that Claudette, as one young girl was willing to stand up against the establishment and accepted norm of the day for something she knew to be right. Claudette's family also deserve much of the credit as they were willing to support her in her willingness to testify knowing they could be potentially hurt physically by doing so.

Have you listened to any of Channie Waites’s other performances before? How does this one compare?

I found the book to be enjoyable and valuable as it helped me understand a part of our American History.

She is amazing. I thank her. At the age of 15 she put herself at risk for what is right.

There's always more to the story. This is a great read. We deserved to know.

An Absolute Must Read!

Claudette Colvin's story is amazing! And Channie Waites does a wonderful job narrating.

I just wish the Epilogue had been included.

To important to be forgotten.

2020 and we are still peeling back the pages of our history and contributions in and to these United States of America.
why are segments of this history stiffled and muffled in the so-called Education system.
I am thankful to Dr. Greg Carr in his weekly Youtube streaming #Inclasswithcarr for leading me to find this book ie this important piece of history.

This was a great book,! Before Rosa Parks became a household name, there was Claudette, a 15 year old girl who also stood up for her constitutional rights by staying seated on the bus, unwilling to get up so a white woman could sit in her seat.

To be oppressed for who you are by white America, and then to have your own story suppressed because of who you are from within the Civil Rights Movement - this is Ms. Colvin's story

There are reasons why Claudette Colvin did not make the same headlines that Rosa Parks made, though they both challenged the system in the same era. Reading Ms. Colvin's story speaks volumes about power and social movements, why some stories are more 'palatable' than others in a particular time and place, and whose stories get told. Her story needs to be told like Bayard Rustin's story needs to be told.

With all of the social importance that the reader is shown, this is the story of one person, told from the perspective of one person. Humility and power coincide in this story; Claudette Colvin never sought to be a hero. Reading her story, the reader sees that the hero within oneself need not be grand. This makes this book all the more powerful.

Very well written.Very well narrated. Great book if you want to learn about the bus boycott.

Loved it! Very emotional and reminding of what it takes in life to move forward...