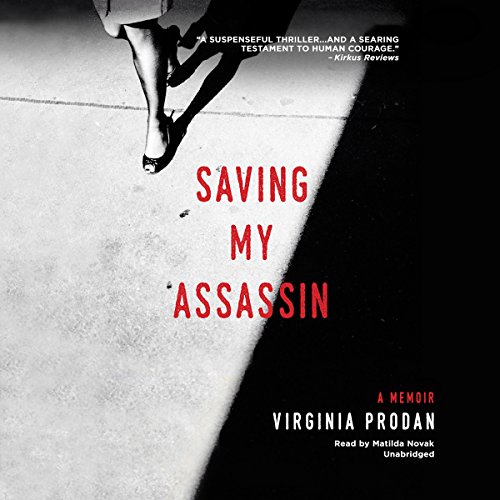 By: Virginia Prodan
Narrated by: Matilda Novak
Try for £0.00

"I should be dead. Buried in an unmarked grave in Romania. Obviously, I am not. God had other plans."

At just under five feet tall, Virginia Prodan was no match for the towering six-foot-ten-inch, gun-wielding assassin the Romanian government sent to her office to take her life. It was not the first time her life had been threatened - nor would it be the last.

As a young attorney under Nicolae Ceausescu's brutal communist regime, Virginia had spent her entire life searching for the truth. When she finally found it in the pages of the most forbidden book in all of Romania, Virginia accepted the divine call to defend fellow followers of Christ against unjust persecution in an otherwise ungodly land.

For this act of treason, she was kidnapped, beaten, tortured, placed under house arrest, and came within seconds of being executed under the orders of Ceausescu himself. How Virginia not only managed to elude her enemies time and again but also helped expose the appalling secret that would ultimately lead to the demise of Ceausescu's evil empire is one of the most extraordinary stories ever told.

A must-listen for all generations, Saving My Assassin is the unforgettable account of one woman's search for truth, her defiance in the face of evil, and a surprise encounter that proves without a shadow of a doubt that nothing is impossible with God.

What listeners say about Saving My Assassin

Amazing story - of how one woman helped the persecuted Christians in Communist Romania, and how she witnessed to the assassin who had to kill her. Story of salvation and redemption!

starts as a really interesting story about a ginger girl growing up as the cinderella of her family in communist Romania. Then suddenly swerves into an essay about how the church was persecuted in communist Romania, how god's love is the way, and america is the best. kinda weird!

Astonishing love of God and faithfulness.

This has been another extraordinary true Christian story that has brought healing to my broken soul. Draw near to God and He will draw near to you. This book proclaims Gods promise to be true. May all who listen or read it find the same. Outstanding courage of an amazing woman in Christ. God bless them all.

I had missed that this was a pro christian story and although I enjoyed the first part of the book when it started to become staunchly christian the logic of the book and almost beame an indoctrination of how wonderful Jesus is. Sadly I found myself increasingly unable to engage with the book as it was universally positive towards christianity, without explanation and critical of the communist regime, again without explanation.
I was disappointed that an interesting book was seemingly being used as a platform for evangelical belief, had I known of it's religious basis I would never have started it.

A fascinating story of faith and a reminder of how Christians were persecuted in Eastern Europe and how God worked and works.

This story will remain with me always. Courage, love, faith and trust fills this wonderful story. May God bless you Virginia 💜

I am from Romania too. Even if I was born after Ceausescu's execution, I know stories of the dark 'golden age'. It was very interesting to listen to a true story from that era, especially a Christian one. I even recognised some of the pastor's name she defended. I was amazed how beautiful God worked through Virginia and I think I should start memorizing the Scripture, because nobody can take it out of our heart and mind! A truly inspiring story! I wish it was translated into Romanian as well, so I can gift it to friends

An amazimg story that kept me gripped to the end.

Inspriring and terrifying insight into pre revolutionary Romania and the story of one woman who with Gods help overcame, survived and thrived

the book was so amazing I thought for the most time it was not based on a true story. only at the very end I realized I have been wrong all the time. well read great story and worth listening to

What an amazing story!

This is an astonishing testimony about the goodness of God. We have it so easy in the West! Wonderful wonderful story with the most amazing end. Loved it.

Would you consider the audio edition of Saving My Assassin to be better than the print version?

Listening to the book pulled my focus to the scenes and feelings that Virginia Prodan conveys in the story of her childhood in an unpleasant home and then life and career as an attorney under the Romanian dictatorship. There are a few twists in the story on the way to the scene with the assassin and that is not the end. I read the print version when it came out and was so pleased to see the audio version that I had to get it as well. The two narrators are very good for this book.

What was one of the most memorable moments of Saving My Assassin?

The house arrest scenes when people seem to enter even with the guards present. To comment about the assassin might spoil the book.

Have you listened to any of Matilda Novak’s other performances before? How does this one compare?

The "creepy" sensation for the tense parts of the book is reoccurring and lasts a while after the book is finished. There were only a couple of tears this time with the audio, but I had read the print version before.

I recommend this book highly for a small look into life in a dictatorship and as a memoir with a positive outcome. This book might be really good for students. Virginia Prodan has studied, trained, and practiced law under two very different systems of government and is a very passionate speaker.

I am in my knees in praises

Virginia’s story is a true inspiration for me. Although I have not lived inside the repression like her, I have watched from the comfort of my freedom the downfall of my own country Venezuela. My family is now in Dallas seeking refugee status as they have also been at the other side of the gun inside their own homes. Now that I see the specter of communism threatening the USA, I only pray that God uses me as Virginia to love and help.

Life changing book a Must Read!

Saving My Assassin is truly a life changing book! I highly recommend this book to anyone and everyone! In an era filled with hate and people crying for justice, this book needs to be shouted from the roof tops! Pray for your enemies and do not stoop low and return their words of slander or hate. Virginia shows the power of Jesus when His word is fully obeyed and expressed through our lives, amongst an unjust, lying, evil, hateful, and deceitful regime. No matter who or what comes against Jesus’s words will not return void, we just need to be obedient and courageous to speak His word even if it is to our assassin as Virginia did that day! Please read it will be well worth your time and money! Highly highly recommend!!!

GTFO with Your Christian Propaganda

I find it repulsive when a religious book is disguised as something else. This novel turned into a Christian propaganda book very suddenly and very quickly and very aggressively. I don't care if a character is religious or of it is part of the narrative, but this is boastful and zealous and just yuck. This needs to be in the religion category. I'm glad this book was free. I would have demanded a refund. Thanks, Ms. Prodan, but I'm not on Audible in search of a savior to save my soul.

Hard to put it down!

It's a dark, beautiful, trying, miraculous, sad, exciting, true story. It challenges your spiritual walk to strengthen areas that may be weak. It emphasizes prayer and dependency on the Lord for guidance, protection, peace, healing, companionship, and daily bread. It's one of the the top 5 stories I've heard that exemplifies forgiveness as Christ forgave and still does.

Exceptional storry for those who crave freedom!

This book captivated me from the beginning to the end. Remarcable detailed, yet easy to envision, the writing and the story telling technique. Was like I withnesed every moment with my own eyes.

Who can imagine a 100 pound woman standing against a corrupt government like she did. Her life was on the line every day.

Very disappointed to have wasted 2 hours of my life just to realize this was really a fiction book steeped in religious belief, which I personally find ridiculous.

A book for our times

Even though the events took place many years ago, this book is so ver applicable to today. Not only does it remind one of the freedoms we have and how we have to vigilantly guard those freedoms, but that only by the grace of God can we continue on. Really great book that I will read/listen to many times.

So very inspiring for me.

I found the story to be exceptionally inspiring, meanful. Sure held my attention and stired my appreciation.