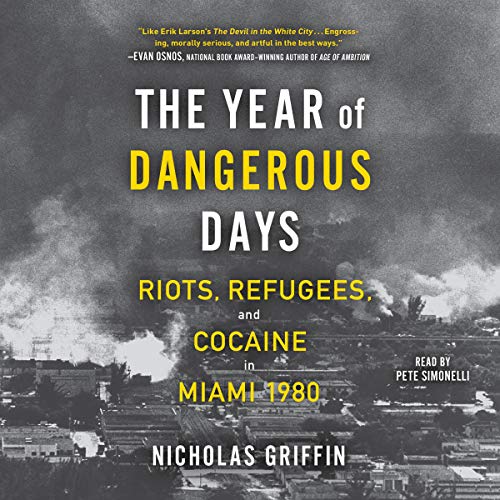 The Year of Dangerous Days

By: Nicholas Griffin
Narrated by: Pete Simonelli
Try for £0.00

In the tradition of The Wire, the “utterly absorbing” (The New York Times) story of the cinematic transformation of Miami, one of America’s bustling cities - rife with a drug epidemic, a burgeoning refugee crisis, and police brutality - from journalist and award-winning author Nicholas Griffin.

Miami, Florida, famed for its blue skies and sandy beaches, is one of the world’s most popular vacation destinations, with nearly 23 million tourists visiting annually. But few people have any idea how this unofficial capital of Latin America came to be.

The Year of Dangerous Days is “an engrossing, peek-between-your-fingers history of an American city on the edge” (Kirkus Reviews). With a cast that includes iconic characters such as Jimmy Carter, Fidel Castro, and Janet Reno, this slice of history is brought to life through intertwining personal stories. At the core, there’s Edna Buchanan, a reporter for the Miami Herald who breaks the story on the wrongful murder of a black man and the shocking police cover-up; Captain Marshall Frank, the hardboiled homicide detective tasked with investigating the murder; and Mayor Maurice Ferré, the charismatic politician who watches the case, and the city, fall apart.

On a roller coaster of national politics and international diplomacy, these three figures cross paths as their city explores one of the worst race riots in American history as more than 120,000 Cuban refugees land south of Miami, and as drug cartels flood the city with cocaine and infiltrate all levels of law enforcement. In a battle of wills, Buchanan has to keep up with the 150 percent murder rate increase; Captain Frank has to scrub and rebuild his homicide bureau; and Mayor Ferré must find a way to reconstruct his smoldering city. Against all odds, they persevere, and a stronger, more vibrant, Miami begins to emerge. But the foundation of this new Miami - partially built on corruption and drug money - will have severe ramifications for the rest of the country.

Deeply researched, “well-written” (New York Journal of Books), and covering many timely issues including police brutality, immigration, and the drug crisis, The Year of Dangerous Days is both a clarion call and a dramatic rebirth story of one of America’s most iconic cities.

What listeners say about The Year of Dangerous Days

Forty Years Ago or Yesterday?

1980–A harrowing year in Miami’s history, brilliantly retold by Griffin from the viewpoint of Maurice Ferre, its forward looking mayor, Edna Buchanan, a crime reporting journalist, and those in the police force who had to deal with the crimes in a city in the midst of great turmoil.

Griffin obviously did careful research as he reports on the confluence of the tense race relations that followed an incident of police brutality (that could have been June, 2020), the Mariel boatlift with the influx of tens of thousands of Cubans into a city little prepared to care for them, and the cocaine drug trade.

Particularly poignant are the descriptions of the Marielitos’ passage and entry into Miami. Overall a very fair examination of deeply divisive issues--especially the Black race riots and their causes.

Pete Simonelli narrates in a voice both familiar and competent. A great listen.

A Must Read for Floridians as well as transplants

The author did well in telling the story of South Florida. It was read perfectly and I was able to listen to it in one shot during a 12-hour Summer road trip from Western NC to, you guessed it, Florida. It never got old, tiresome or felt forced.

Dope AF! Truly a must read for EVERYONE!

Dope AF! Truly a must read for EVERYONE Interested in the full history of Miami culture.

Amazingly described... lived the 80s in Miami and story told in a most chilling recall of the times.

I grew up in Miami in the late 70s and early 80s, this book is a gut wrenching read. It’s a story that deserves professional care from its author and in my opinion, it received such care with excellent writing and brutal honesty. I had an uncle in Miami PD and recall his stories about the 1980, ‘82 and ‘89 riots along with tales around the dinner table about narcotics trafficking and interdiction. We moved to West Palm Beach in the late 80s. Thank you for writing this book.

The most gripping and direct book on Miami

This book provided me with a deeper understanding of the city I was born and raised in during a period in my life where I was growing up and learning how to survive. I have not stopped recommending this book to my friends that always ask me what makes Miami so different from other cities.

Fabulous book! It really describes what went on in Miami in the late 70s and 1980s

I moved here in the mid-70s and lived through everything described in this book. It was so fascinating to hear it in the big picture form and be able to see the way everything intertwined. Truly fabulous read. A must for anybody who grew up in Miami. Or for anyone who wants to understand its history

This is a terrific book—grabs you like a great novel, but it’s non-fiction. I grew up in Miami and was a teenager in 1980, the year documented in this book, so I have a special interest in the subject, but it was riveting.

Miami in 1980 was an appetizer for the future of America. Griffin's book capitures it brilliantly!