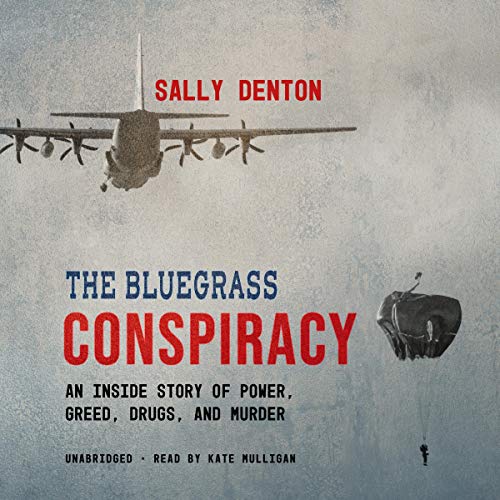 By: Sally Denton
Narrated by: Kate Mulligan
Try for £0.00

When Kentucky blueblood Drew Thornton parachuted to his death in September 1985 - carrying thousands in cash and 150 pounds of cocaine - the gruesome end of his startling life blew open a scandal that reached to the most secret circles of the US government. The story of Thornton and “The Company” he served, and the lone heroic fight of State Policeman Ralph Ross against an international web of corruption, is one of the most portentous tales of the 20th century.

What listeners say about The Bluegrass Conspiracy

A great read! An absolute eye-opener! And a true story!

I'd been looking for a US written murder and was NOT disappointed.

An incredible book that kept me enthralled the whole way through. Corruption has no limits.

Good story if you're from the area

Good book if you are from the area but the narrator is horrible. If you cannot pronounce the county of Kentucky in which the story takes place you are in trouble. Horrible southern accents that are stereotypical but not factual.

I am a little disappointed in listening to this book. I found myself yelling the Kentucky pronunciations of many of the names of towns, cities or counties. Would have either loved hearing a Kentuckian narrate this or for the Author to guide the narrator on how things were pronounced.

The book was great. Especially if you are from Kentucky. No surprise of the rampant corruption. The narrator was the worst. If I hadn’t wanted to hear the book so badly I would not have been able to get past the first chapter. Her “accent” for Kentuckians was more Louisiana than Kentucky and her total destruction of Kentucky locations and other words was painful. Please have someone else redo this book. I would love to give it another listen but not with this reader. If I see her name attached to another book I won’t be listening.

wrong narrator for this kind of book. she sounds like she should be narrating a children's book. really killed the mood

Good story but painful to listen to

The author of this book should have listened to it before allowing this trash on Audible. She pronounced Jessamine county as a Jessa-MINE (like a mine shaft) instead of Jessa-min. Fayette was pronounced with a French pronunciation… it was so unexpected I didn’t realized she was taking about Fayette county, Kentucky until she started referring to other locations.
The narrator had absolutely no inflection through the entire book. A computer would have read it about the same.

Well written investigative book. Eye opening in to the criminal world and political corruption in Kentucky and how far reaching and connected it was. Well narrated.

Why illegal drug trade is not stopped

This book details how incestuous the drug business really is involving politicians from governors to presidents, wealthy business people, state and federal law enforcement, and their willingness to ruin or murder anyone who gets in their way.

Great story, no so great accent

Story was interesting and all new to me. But the attempt at the southern accents distracted me some. Worth a listen for sure.

The reader mispronounces almost every location. It's very annoying. She pronounces Jessamine multiple ways & all are wrong. Which is surprising considering it's pronounced how it's spelled. And pronouncing Fayette as Fi-et is ridiculous. That's not a name unique to KY. The story is good but the reading is annoying.

Any Kentucky native, current or past resident will feel very disappointed. It’s common to Kentuckians that city and town names get mispronounced. However, most of the wrong mispronunciation is merely a cultural slang difference. That is not the case in this books narration. She completely strikes out. Fayette County become Fyatte County as if she believed the place to be French. I am no writer, or avid reader. I dreaded English literature in school. I just enjoy a good story, especially true history stories based in my home state and area. Like most others I am just disgusted with the narrator. However the author did a great job.