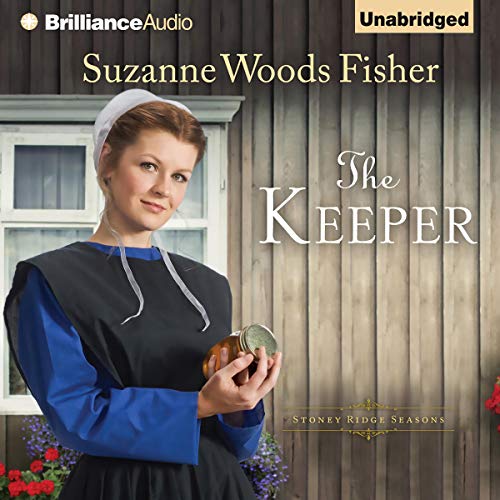 By: Suzanne Woods Fisher
Narrated by: Amy Rubinate
Try for £0.00

Life on Windmill Farm hasn’t been the same since Julia Lapp’s father has had trouble with his heart. But that doesn’t stop Julia from hoping for a bright future. She has planned on marrying Paul Fisher since she was a girl. Now twenty-one, she looks forward to their wedding with giddy anticipation. But when Paul tells her he wants to postpone the wedding - again - she is determined to change his mind. She knows who is to blame for Paul’s sudden reluctance to wed: the Bee Man.Roman Troyer, the Bee Man, travels through the Amish communities of Ohio and Pennsylvania with his hives full of bees, renting them out to farmers in need of pollinators. A mysterious man who relishes his nomadic life, Roman especially enjoys bringing his bees to Stoney Ridge each year. But with Julia seriously at odds with him, Windmill Farm is looking decidedly less appealing.

Can Julia secure the future she’s always dreamed of? Or does God have something else in mind?

“ The Keeper is a keeper. From a fabric of likable and original characters, Suzanne has crafted a moving story of faith and loyalty, a story of hope shining out of the darkest places. A captivating read.” (Dale Cramer, bestselling author, Levi’s Will)

What listeners say about The Keeper

Fabulous Listen--Don't Miss This One!

Paul Fisher is not the guy for Julia Lapp, even if they are promised to one another. She's finally woken up and realized his cold feet might mean something. But she's angry. And she targets Roman Troyer, the Bee Man, as the instigator. Roman is far from home with a streak of white hair announcing the trauma he's experienced because if one looks closely they'll see a handsome young man. Only his past has caught up with him in the form of an irascible woman who is not going to let him keep running, if she can help it. Julia's winsome character and strength make her a strong heroine and her sister is a lot of fun, too.

Stoney Ridge is a lovely place but so many changes have happened that the inhabitants of the Lapp farm aren't feeling too secure.

God's will is at play. And it may not be what Julia and Roman think it is. Lovely story, great characterization, and that fabulous Suzanne voice--what more could you ask for?

I was minutes away from chucking this audio book . . . I couldn't bear the whining and groveling by Julia over Paul's SECOND postponement of their wedding . . . Amish or no . . . it was PLAINLY too much . . . I'm not a big romance listener . . . has to be a lot more to it for it to catch my attention . . . then grumpy, stern Fern comes on the scene, gentle, thoughtful, Menno, wild and wonderful, M.K. root beer popping, Uncle Hank and then FINALLY the Bee Man . . . the Lapp family, barely limping along since their mother passed away, and now their father, Amos has a failing heart, his condition worsening by the day . . . suddenly this was EXACTLY the kind of book that I love to listen to . . . life at Windmill Farm, with its daily struggles and victories . . . brothers and sisters . . . a community pulling together . . . and faith in God, individually and corporately . . . and ultimately a young woman, learning that the stars in her eyes, well, that isn't really the stuff that makes for a lifelong love . . . grieving, giving, letting go, healing . . . I'm on to the next book in the series . . . I won't judge too quickly this time :)

sweet story with great characters and great story. there was surprising twist at the end. i was very surprised.
i liked this book alot.

Great story, lots of twists and turns.
Like the Fern-isms throughout the story.
Great narrator, also.

The book started off as a typical love story with a few predictable turns. However, the author creates a whole new level in family dynamics with the fathers illness. I am not a big fan of Amish novels, but I did enjoy this book. I applaud the author for a good clean book void of explicit sex and language. Amy Rubinstein does a fairly good job narrating. I have listened to other books she has narrated and would get annoyed at her mispronunciations of certain word. Examples: Head = had, Chest= Chast, Beth (another book)= Bath, Yes = yas. Sometimes she runs sentences together or no pause between paragraphs. She does have a nice tone to her voice which makes it easy listening. Overall, good story. I will recommend this book to my friends.

Liked the story but too much filler material. The narrator has good voices and does a good performance except for the most serious parts. Her acting was too cavalier for the depth of emotion in the script.

Loved this story about the Amish family.It was interesting, filled with romance, ,humor, and inspriration

Such a great read!

I enjoyed this book so much! The audiobook was fantastic and the story kept my attention until the very end

love the whole stoney ridge series! the reading was excellent and the story line awesome!

Slow start but very good story. I can't wait to hear the next story in the series. Is a good travel book