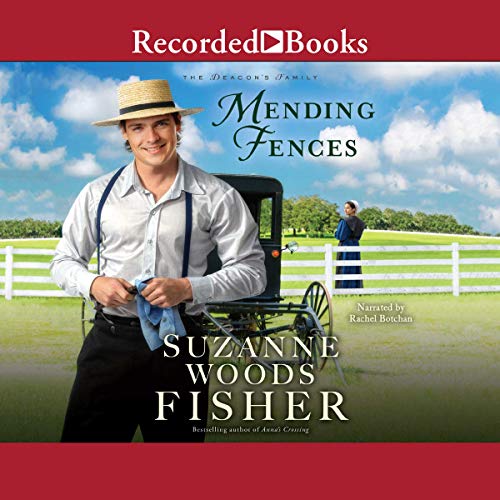 By: Suzanne Woods Fisher
Narrated by: Rachel Botchan
Try for £0.00

Every saint has a past. Every sinner has a future.

Luke Schrock is a new and improved man after a stint in rehab, though everyone in Stoney Ridge only remembers the old Luke. They might have forgiven him, but nobody trusts him.

Amos and Fern Lapp allow Luke to live at Windmill Farm under two conditions. First, Luke must make a sincere apology to each person he's hurt - a four-page, single-spaced list. Second, he must ask each victim of mischief to describe the damage he caused.

Simple, Luke thinks. Offering apologies is easy. But discovering the lasting effects his careless actions have caused . . . that isn't so simple. It's gut-wrenching.

And his list keeps growing. Izzy Miranda, beautiful and frustratingly aloof, also boards at Windmill Farm. Luke's clumsy efforts to befriend Izzy only insult and annoy her. Eager to impress, Luke sets out to prove himself to her by locating her mother. When he does, her identity sends shock waves through Stoney Ridge.

Best-selling and award-winning author Suzanne Woods Fisher returns to her beloved Stoney Ridge for this brand-new series featuring some of her listeners' favorite characters.

What listeners say about Mending Fences

the story just gets Fuller and Fuller, more interesting as it goes. I really enjoy this book, and I'm sorry to see it end. I hope there are more books in this story.

I have so many thoughts about this book... where to start?

This book ended up so much better than I thought it would be. I have only ever listened to one other of this author’s series, so I wasn’t for sure if her style of writing would be my cup of tea; but oh how much I loved this book!

I feel like I have just experienced a emotional journey, so many emotions was stirred while listening to the story. I laughed, I cried, and so much more.

If your asking yourself wether or not to give this book a try... I say YES!!! Don’t wait, click purchase.

This book has a lot of surprises, twistes and turns. Give it a little time to surprise you.

Great story - characters, therapy, relationships and community among Amish and also with English!
Get ready to have your buttons pushed big time.
Great narrator job, also!

kept me on the edge of my seat

i absolutely loved this book and can't wait to read book 2 in the series.

the life struggles were presented in such an understanding way. and including a mischievous raccoon just kept me waiting for the next escapade.

This is not your typical Amish romance; and what a treat that made it! I was delightfully surprised at how well this book addressed a “darker” side of Amish life, without taking creative license with the rest of the story.

The 2 books in this series are are probably two of my favorite listens all year.

The author did a wonderful job of making the characters realistic. Also, dealing with the broad spectrum of recovery from addiction and its impact on the addict as well as the family and friends was done in a caring and sensitive manner.

Can't wait for book #2. She is a wonderful author and shares the love of God so well!!!!

I HAD TO KEEP LISTENING!

I Found I couldn't stop filling every spare moment lwith hearing this story!