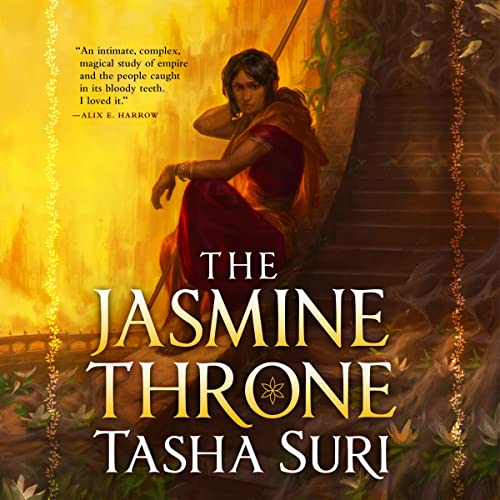 By: Tasha Suri
Narrated by: Shiromi Arserio
Try for £0.00

One is a vengeful princess seeking to depose her brother from his throne. The other is a priestess searching for her family. Together, they will change the fate of an empire.

Imprisoned by her dictator brother, Malini spends her days in isolation in the Hirana: an ancient temple that was once the source of powerful magic—but is now little more than a decaying ruin.

Priya is a maidservant, one of several who make the treacherous journey to the top of the Hirana every night to attend Malini's chambers. She is happy to be an anonymous drudge, as long as it keeps anyone from guessing the dangerous secret she hides. But when Malini accidentally bears witness to Priya's true nature, their destinies become irrevocably tangled....

The Jasmine Throne begins an epic fantasy trilogy set in a world inspired by the history and romances of India, in which a captive princess and a maidservant in possession of forbidden magic become unlikely allies. The sapphic romance and Booktok sensation!

"Raises the bar for what epic fantasy should be." (Chloe Gong, author of These Violent Delights)

"This cutthroat and sapphic novel will grip you until the very end." (Vulture, best of the year)

"Suri's incandescent feminist masterpiece hits like a steel fist inside a velvet glove." (Shelley Parker-Chan, author of She Who Became the Sun)

What listeners say about The Jasmine Throne