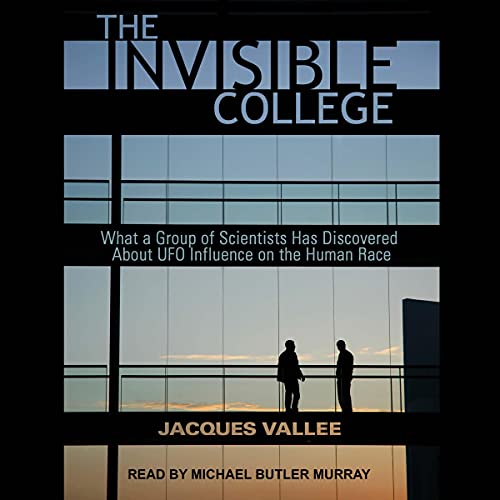 By: Jacques Vallee
Narrated by: Michael Butler Murray
Try for £0.00

What is the nature of unidentified aerial phenomena?

Forty years ago a small cadre of dedicated researchers began actively investigating cases, interviewing witnesses, and exchanging data through a small, informal network of international contacts. Today this low-profile network, or "invisible college", has grown into a larger, multination volunteer research effort joined by many individuals. But the questions first raised 40 years ago remain current - and unanswered.

"I believe that a powerful force has influenced the human race in the past and is again influencing it now. Does this force represent alien intervention, or does it originate entirely within human consciousness? This is the question that forms the basis of the work of the Invisible College of UFO researchers." (Jacques Vallee)

What listeners say about The Invisible College

After listening to John E Mack 'Believer' this falls short. It took me a long time to get used to the narrator. Content was very poor.

The "updated" analysis isn't worth a credit. It is mostly a rehash of old info. I regret this purchase.

In short, I like the book. But, the voice talent of the recording is not very pleasant. He takes a lot of getting used to.

I bought the book because I have heard and read about the author for decades and I wanted to see what he has to say. Mission accomplished, and it is interesting. But, It isn’t what I was expecting, though it is interesting and I like it.

But, the title is misleading and the text really goes out into the weeds and down the rabbit hole.

The author being a European in origin makes the book more interesting because many of his examples takes place in European countries, which adds depth to the book.

It would have been better if a PDF of the illustrations referred to was included, but it isn’t.

Basically, I recommend this book, but I don’t see it ever being a loved classic of UFO literature.

This is required reading for sincerely interested parties. Unfortunately, the narration makes it almost impossible to engage with it in this format. Nasal and robotic reading, with sharp 'S' sounds that cause actual pain in my inner ear. Waste of a credit. I hope they didn't have this same guy read the rest of Vallee's work.

A Good Book Ruined By the Narrator

The narration by Michael Butler Murray made this audiobook unlistenable.
I cannot overstate how God-awful the narration is for this book.

And then I heard Mr. Murray's voice.

I might have been able to push through and listen to the book had it just been an issue of the sound Mr. Murray's voice. His manner of delivery, his cadence, and his inflections, however, made this impossible.
I hate to beat a dead horse, but, my god...this narrator is the worst.

OMG that was hard to get through. I stuck with it because Vallee is such a well-known figure in UFO studies. But it's just really outdated. He says for example that there's "no evidence" the U.S. govt. is involved in a cover-up of the UFO phenomenon. Yeah, we are way past that point. And the stories he's chosen are mostly about a bunch of quacks (Uri Geller? Not even worth mentioning.) So no wonder he is unable to draw any definitive conclusions. I get really impatient with books that try to treat this like a sociological phenomenon because we are wasting precious time. We have accumulated enough information over the last 50-80 years that we should be able to start making educated guesses as to what this is all about. Richard Dolan is a good example of somebody who's doing that.

Great book, marrarator, not so much

I’m sorry but, at certain points, it sounded like Prof Frink from The Simpsons was reading to me. Look, I know I don’t have a voice for audiobooks so I’m hesitant to be negative but, I probably won’t be listening to any more book narrated by this gentleman.

I enjoyed this book way more than I thought I would. I recommend this book to anybody who enjoys the subject or knows anything about the invisible college or wants to learn more.

This book lifts the vail.

The answer is not here, read the book and embrace the world around you. It’s a truly good book.

This guy reading this book is just awful. His voice hurts my ears. Why is it these books are always getting the worst possible person to read the thing?