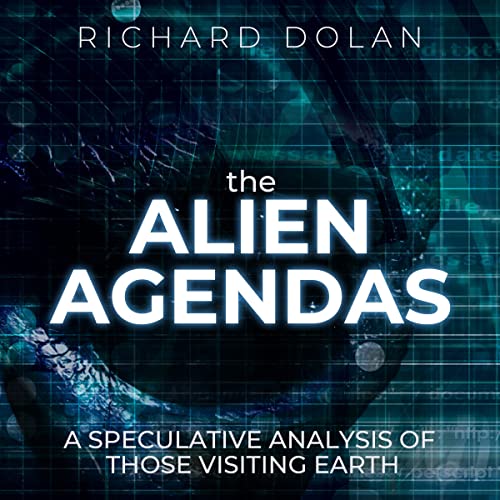 By: Richard Dolan
Narrated by: Bruce Richardson
Try for £0.00

Of the many books on UFOs and aliens, this one may be unique. Richard Dolan, one of the world’s leading historians of the UFO subject, has analyzed the different alien types and agendas based on longstanding patterns observed by witnesses. This is both a careful review of the best evidence we have of human-alien interaction, as well as a bold speculation of just who the aliens are and what they want.

Dolan’s analysis starts with our ancient prehistory and potential genetic modifications and monitoring by extraterrestrials. He also studies the long history of interaction with perfectly human-looking beings who somehow did not seem as though they were “from here”. Such interactions have continued through the present day. Who are these beings? He also analyzes reports of gray aliens and other types, including reptilian types, insectoid types, hybrid beings, and a range of others.

With a view toward understanding their psychology, their technological capabilities, and the nature of their interactions with people, he speculates as to what ultimate plans may be. He argues that the alien presence is especially important now. This is because of the rapid transformation of human civilization into something we have never before experienced. We still don’t have a proper name for what we are going through, but it includes a combination of radical new technologies with a new social order that ultimately might make human civilization much more like the societies that these other beings already have - one that combines a tightly centralized and controlled social order with sophisticated science and technology.

What listeners say about The Alien Agendas

A bundle of various stories that are not really backed up by factual evidence. For me the book need to be more organised, coherent and laid down in some chronological order with some attempt at a conclusion.

One of the best books on the subject.

Absolutely fascinating. Well read. Thorough thoughtful and thought-provoking. Without being close minded this book is open to suggestion and endless possibility.

So many books talk about UFOs and the Grays. It's lovely to read something different for a change.

For those like me who have had their own 'experiences' with this phenomena, we want to hear about the politics of it all, who the gate keepers are, how they control so many people from military, doctors, navy fleets, nurses to contractors, builders and pilots from speaking out, even when coming to the end of their life.

It is my opinion that there are those in NATO, NASA,WEF, WMF and other leading power groups on this planet, aren't what they appear to be. I used to believe that they were here to help us and guide us, but it is clear they aren't. Or at least most aren't.

We are currently going through soft disclosure (September 2022) but for who I wonder?

So many questions it makes me head swirl.

Lastly - I really enjoyed this book and the narrator was fantastic

I've been following Richard Dolan ever since reading A.D disclosure and his two newer books 1 & 2 of secret state & ufos . its taken me a week too finish this book Alien Agendas . I just couldn't stop listing to it . I agree on the speculative way he has penned and narrated this book on ufos Aliens phenoma that is still going on bow in 2022 . Thankyou to Richard & Traci his devoted wife and friend for giving us a believable & way out there book .reviewed from the United Kingdom 🇬🇧 😀

A very difficult subject, but well worth reading.

The subject calls for a book such as this. The author, by trying to cover all bases, all with correct caveats, means it makes for difficult reading/listening at times. The conclusion is first rate.

First of all thank you for releasing on audio. Put all Dolan books on audio please!
And about the book, Dolan puts in some interesting arguments and his view on the UFO phenomenon in general going beyond the confort zone of very likely most people. Dolan's views and reasoning are pretty good baked up by many cases we all have heard historically about the subject. The last two chapters are the most important in the book in my opinion.
I will go through both again soon!

I was fine with most of this book until he went full Qanon right at the end. Pure paranoid delusions. I guess if you’re into that sort of thing you’d enjoy this book.

It's short. The first half is interesting knowing it's pure speculation. The second half is a re-hash of all the old cases from previous books.

Best book yet, on the subject and by the author

Best book I have heard or read yet on the subject and by the author. I appreciate the speculation he offers herein because it's nice to hear some actual opinions by someone who has researched and thought about the Phenomenon for so long. I appreciate the academic approach to the subject too, nicely done and a good book to recommend to someone just starting out in their reading, he retells the main stories well and analyses them within the field highlighting their significance and relevance. Nice having a very up-to-date perspective post-Nimitz videos and interesting that he brings the Great Reset and technocracy into the mix and discusses the Phenomenon from this perspective - kinda terrifying really and I think I would like to hear more on this please because I think it's a very important point we have all been missing. Thank you for all your work writing this book, Richard. I have it in print form too and it has a good collection of illustrations. This has been a really powerful read and listen and I think I'll start it again.

Dolan should have read it himself, and the book is too short. But overall a great and interesting angle on the subject.

I'm not convinced this is a human reading. He sounds like A.I., very ironic, based on the topic of the book 😄 The reader doesn't seem to pause between sentences, paragraphs, topic/chapters giving me a bit of anxiety feeling like I need to take a deep breath.

I Love all Richard Dolan's books and like other followers, would much rather listen to Richard himself read his books.

Thank-you for all your research and willingness to share with the world!

Love me some Richard Dolan

unfortunately not a fan of this guy's robotic reading, it's too fast, I've no idea why Richard didn't read it himself He's an excellent orator!?

I bought this audiobook because I heard the author raving about working with this narrator. So I thought it must be good.

Unfortunately, the narration is absolutely awful.

It seems like if a narrator didn't know how to pronounce a word, they would do a quick search and figure it out. This narrator seems to have done a lot of "winging it".

The narrator mispronounces (and badly) the names of several cities like Mobile, Alabama and Pascagoula, MS.

It just seemed to me like a lazy attempt to finish narrating the book as quickly as possible without concern for getting things right.

I generally like the book, but I couldn't get through the Audible version of it.

The author doesn’t seem to agree or disagree with his findings. he simply puts his investigation into words and allows the readers to come to their own conclusions. Not a bad read for someone interested in government cover up of alien contact.

Constant proposals of the speculative nature of aliens. No real delving into the agendas just keeps moving on to the next notion.