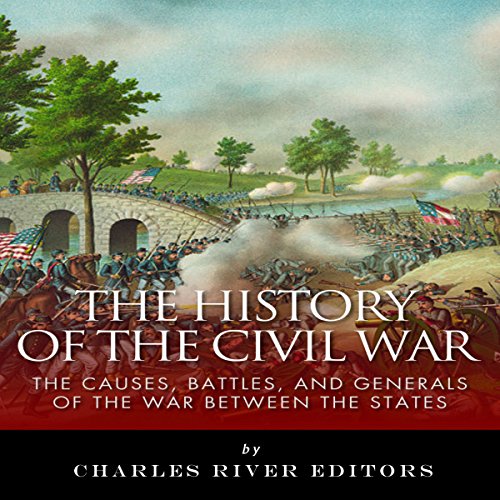 The History of the Civil War

By: Charles River Editors
Narrated by: Chris Abell
Try for £0.00

The Civil War was the deadliest conflict in American history, and had the two sides realized it would last four years and inflict over a million casualties, it might not have been fought. Since it was, however, historians and history buffs alike have been studying and analyzing the biggest battles ever since. Americans have long been fascinated by the Civil War, marveling at the size of the battles, the leadership of the generals, and the courage of the soldiers. Since the war's start over 150 years ago, the battles have been subjected to endless debate among historians and the generals themselves.

The secession of the South was one of the seminal events in American history, but it also remains one of the most controversial. The election of Abraham Lincoln was the impetus for secession, but that was merely one of many events that led up to the formation of the Confederacy and the start of the Civil War.

The Confederacy's hope of being let go in peace ended at 4:30 a.m. on the morning of April 12, 1861, when Confederate Brigadier-General P.G.T. Beauregard ordered the first shots to be fired at the federal garrison defending Fort Sumter in Charleston Harbor, effectively igniting the Civil War.

Today, First Bull Run is remembered as the first important land battle of the Civil War, but with over 350 killed on each side, it was also the deadliest battle in American history to date, and both the Confederacy and the Union were quickly served notice that the war would be much more costly than either side had believed.

What listeners say about The History of the Civil War

although it is detailed and very informative, it is very heavy in thst when using quotes of the participants there is no sensr of editorial discretion but rather the entire quote which lasts for 5 minutes or more, which leaves the listener wading through treacle whilst listening to the narrative. A lighter touch would enhance the enjoyment whithout diminishing the narrative

Gave up after three attempts. Not even good academically. Quoting verbatim is not good book.

Far too much gratuitous reading of proclamations, statutes and letters which is tedious. The narration is also dry.

Lots of info, lots of redundancy

Detail on causes that I have never heard before.

Who would you have cast as narrator instead of Chris Abell?

Probably. Hard to tell if it is the narrator or producer/director or the script.

Too much minutiae, awful narration

I love reading everything I can on this war because it is politically and sociologically fascinating. I really wanted to like this book. However, the extraordinarily boring narrator, coupled with such tedious detail down to which window, what caliber bullet hit, finally wore me down. I've gotten through a 3rd of it but each time end up shouting 'No mas!' So disappointing.