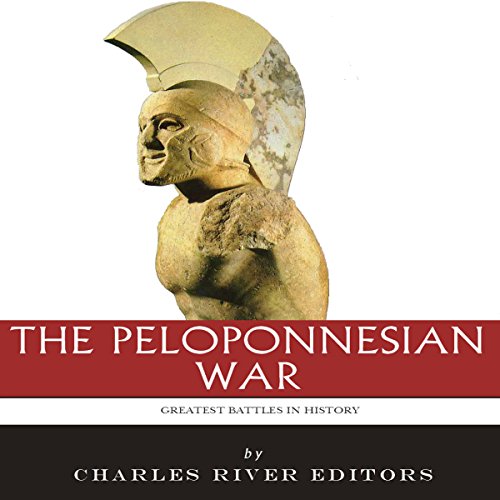 The Greatest Battles in History: The Peloponnesian War

By: Charles River Editors
Narrated by: Doron Alon
Try for £0.00

"Thucydides, an Athenian, wrote the history of the war between the Peloponnesians and the Athenians, beginning at the moment that it broke out, and believing that it would be a great war and more worthy of relation than any that had preceded it. This belief was not without its grounds.... Indeed this was the greatest movement yet known in history, not only of the Hellenes but of a large part of the barbarian world - I had almost said of mankind." (Thucydides, History of the Peloponnesian War)

The Peloponnesian War, as the great historian Thucydides wrote in the introduction to his eponymous book, which has become one of the greatest historical treatises of antiquity, was an event of such calamitous magnitude that Greece had never witnessed its like in all of recorded history. Not the Trojan War, not the Dorian Invasion, not even the recent Persian invasions - which had devastated mainland Greece and seen Athens herself evacuated and put to the flame, the buildings on her Acropolis razed into dust - could compare to the scale of the devastation that engulfed all of Greece for almost three decades, causing the deaths of tens, perhaps hundreds of thousands.

Entire populations were displaced, whole cities destroyed, and mountainous sums of money spent, all in order for Greece's two most famous city-states to establish who had dominion over Greece. Sparta, whose invincible armies had recently led the Greeks to victory against Xerxes' hordes at Plataea, was at the head of the Peloponnesian League. Their opponents were led by proud Athens, possessors of a fleet that virtually dominated the entire Mediterranean and decimated the Persian navy at Salamis and Mycale, at the head of the Delian League.

What listeners say about The Greatest Battles in History: The Peloponnesian War

I found this a very useful summary which helped me to navigate a wide expanse of military history. Detail is inevitably lost as everything is compressed but a brilliant map to have on the journey

The Audiobook is Shorter Than The Kindle Text

The pace of reading is rapid if one is attempting to learn the details of this period. I corrected this by adjusting the speed of my device. I simply felt that this audiobook was rushed in an attempt to make it a quick study and in so doing, lowered the overall quality of the product.

The Kindle is a better product and I was glad that I listened and read simultaneously. Thank You....

Its a good book and gives you a good overview of the peloponnesian war. If you want the general history of the war with ought being mired in to many details or reading a 1,000 page book this is a good listen.