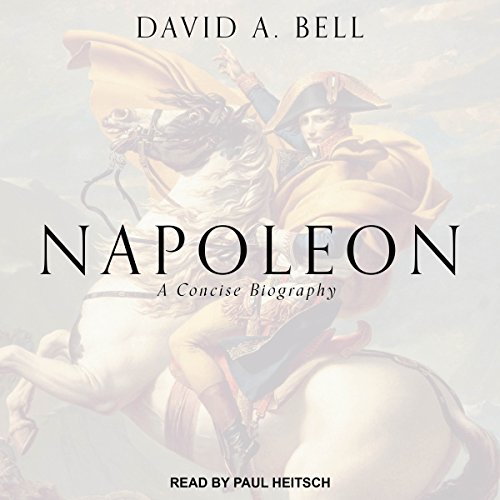 This book provides a concise, accurate, and lively portrait of Napoleon Bonaparte's character and career, situating him firmly in historical context.

David Bell emphasizes the astonishing sense of human possibility - for both good and ill - that Napoleon represented. By his late 20s, Napoleon was already one of the greatest generals in European history. At 30, he had become absolute master of Europe's most powerful country. In his early 40s, he ruled a European empire more powerful than any since Rome, fighting wars that changed the shape of the continent and brought death to millions. Then everything collapsed, leading him to spend his last years in miserable exile in the South Atlantic.

Bell emphasizes the importance of the French Revolution in understanding Napoleon's career. The revolution made possible the unprecedented concentration of political authority that Napoleon accrued and his success in mobilizing human and material resources. Without the political changes brought about by the revolution, Napoleon could not have fought his wars. Without the wars, he could not have seized and held onto power. Though his virtual dictatorship betrayed the ideals of liberty and equality, his life and career were revolutionary.

What listeners say about Napoleon

I found this to be the perfect introduction to the life of Napoleon for a general lay reader who is not an expert or trying to become an expert. It moves briskly but manages to touch on many dimensions of Napoleon's life - his upbringing, personality, his marriage, his military campaigns, his role in the French Revolution and French politics and diplomacy. It seems to present a balanced take on the dark and positive sides of Napoleon's legacy and role in history. The writing is sophisticated but not academic. This was exactly the kind of biography I was looking for.

This audiobook provides the perfect narrative for anyone looking to understand Napoleon's life. The narrator's voice was not to my liking and made the experience a little irritating at times but it didn't detract from the overall story.

Well narrated. Great for casual interest in Napoleon. Will likely leave some wanting more. Worth the time and enjoyable.