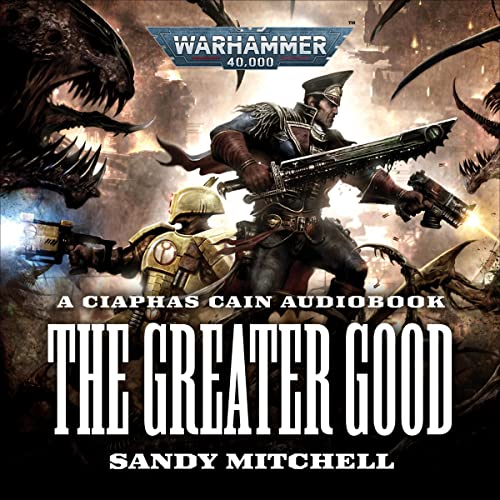 Book 9 in the Ciaphas Cain series.

Hero of the Imperium, the legendary Commissar Ciaphas Cain, is back in the field, and this time he's facing down both the T'au Empire and the tyranids.

Listen to it because....

Treacherous t'au, terrifying tyranids and the irascible Commissar Cain – it all adds up to a classic tale from the master of Warhammer 40,000 comedy-action.

When the world of Quadravidia comes under attack by the insidious tau, only one man can defeat the aliens and save the planet in the Emperor's name – the legendary Hero of the Imperium, Commissar Ciaphas Cain. When the aliens call for a ceasefire, Cain expects the worst, and his fears are answered in the form of the dread menace of the tyranids. As a hive fleet approaches Quadravidia, Cain must try to forge an alliance between the Imperium and the t'au – but can he truly trust the inscrutable xenos?

What listeners say about The Greater Good

Love Cain and don’t have much hopes for complex story lines in Black Library books- but this book felt inconsequential and pretty pointless.

Kind of rote at this point

This was one of my favourite series.

But you get the impression that they kept the author in a basement and wouldn't let him out to see the sun until it was finished. You can feel he's just going through the motions.

Also, disappointingly little Tau for a novel called "For The Greater Good".

Very good story, not one to end the series on though. hopefully soon. :D

Voice actors were perfect. Could swear Amberly was my English teacher 🤣.

Story was typical Cain fun. If you enjoy his exploits, you will enjoy this.

Another top notch entry into the legend of Cain! Voice acting on point as always.

Loved it! Classical Cain novel and glad to have another one to listen to. Look forward he the next one!

I've been waiting for this one fir a while. Intrigue, the Tau, and a devilish rogue playing to the crowd. a worth while listen.

I’m now only beginning to release the extent of his brain damage. He gets hit in the head pretty much every book. No wonder he’s a bit ‘off’

Sandy Mitchell does it again with another great Cain story. At this point you already know what you'll be getting.

Yet another brilliant story from Sandy Mitchell and outstanding narration by Stephen Perring. I can’t wait for the next one.

Story is the same as every other Ciaphas Cain book in existence but the cover is a flat out lie. the Tau only act as messengers they don’t fight alongside as it would imply this is a mechanics book 95% of the time

other books where better, but it's a must read. it do be what it is

Spoken beautifully by the reader and the story was tremendous i have read in paper and listetened to it now multiple times!!!

Solid entry as usual, I'm very glad they've kept the same narrators- in the Cain books you could even call it voice acting- throughout the whole series.

least of a great series

the greater good was a decent book, but unlike most of the earlier books in the series i never laughed out loud doing the reading
the story is also far more predictible, all of its twists being pretty obvious
lastly the book is called for the greater good, and yet the Tau are barely in it which I tought was a damn shame

Fewer tau bits than expected given the title. But also more factions intermingling than I’ve read/heard in any other black library story.
Overall very fun. Best narration I know of personally.