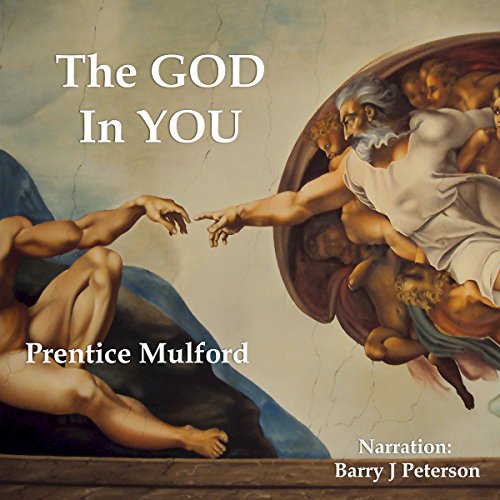 The God in You

By: Prentice Mulford
Narrated by: Barry J. Peterson
Try for £0.00

It is probably as old as the earliest traditions of civilized man, and the preaching of it becomes a periodical necessity through the very evolution and growth of civilization itself. It acts as an alternative medicine, a corrective of the tendency inherent in civilization to drift insensibly into channels of artificiality, to substitute the letter for the spirit, the creed for the life, the formula for the thing signified, habit for deliberate conscious action, the cant catchword for the life-giving principle, the spurious imitation for the genuine product. The Gospel to which I allude is the Gospel of the Return to Nature.

In every generation of the world's history since man was civilized, the realization of this state has been the dream of a few idealists who saw it existing in the far distant past of the world's history in an allegorical form as the fabled Golden Age sung of by the poets. If it is older than all the religions, it yet takes its place as an essential element of all of them in the first stages of their existence. Jesus Christ struck the keynote in his preaching when he bade his disciples, "Suffer the little children to come unto me, for of such is the Kingdom of Heaven," and again when he said, "Except ye be born again as a little child ye cannot enter into the Kingdom of Heaven."

What listeners say about The God in You

This book helps me to change my thought process. I stay positive and only look for the good.

Get back to the foundational principles of nature.

This book is very reminiscent, for me, of the teachings of Neville Goddard, Smith Wigglesworth, Joseph Murphy. Most currently, authors like Pam Grout, Florence Scooval Shin and Joe Despenza translate similar information about the "self", "the infinite", "the universe", "God" or whatever name we use for that force, power or intelligence which is greater than our own. They express how they acknowledge, and form a proper relationship with this intelligence, give reverence for what it is and teach how to live a life in harmony with it. Good stuff!