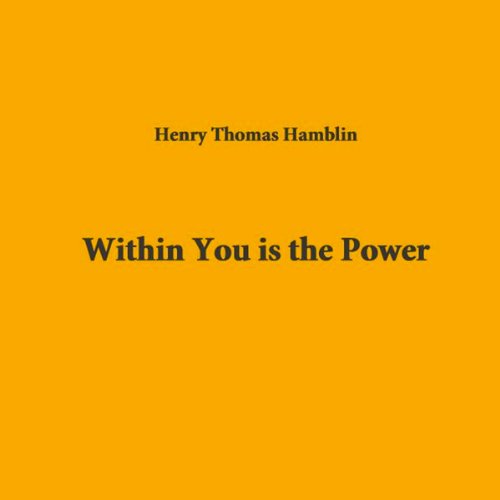 Within You is the Power

You are the architect of your own life: it is yours to make or to mar. By the power of thoughts you are building; are you building aright? The power of thought, as Emerson says, is a spiritual power. It is the greatest power that man has at his disposal. The world today is in its present state simply as a result of mankind's collective thinking; each nation is in its present state of either peace and prosperity, or poverty, murder and anarchy, simply as a result of its thinking as a nation; and each individual is what he is, and his life is what it is, and his circumstances are what they are, simply as results of his thoughts.

By thought man either blesses or curses himself. By it he brings into his life either success or failure, health or disease, happiness or unhappiness, poverty or prosperity. It is all in his mind and the character of his thought. Whatever there is in your life or mine, of disharmony, lack, sickness or unhappiness, is the result of our disharmonious thought. We live in an orderly Universe, but we do not react harmoniously to our environment, we are not in correspondence with the hidden law and order around us. It is not necessary for the universe to be altered; what is needed is that we ourselves should be changed. Within ourselves is the cause of the disorder in our own individual world—for we each live in a little world of our own creation—therefore, the disorder and trouble lhal afflicts us, or the lack that restricts our life, can never be overcome, save by a change of mind, habit of thought, and mental attitude.

What listeners say about Within You is the Power