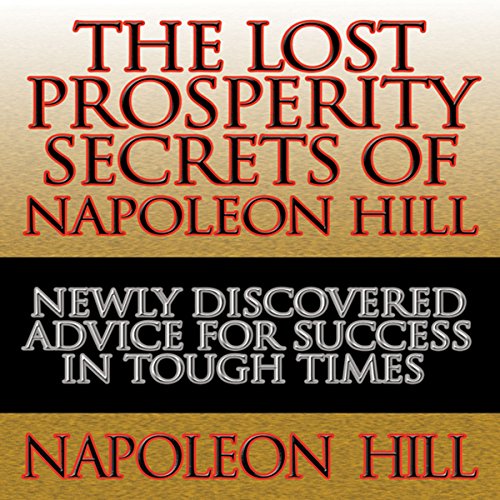 By: Napoleon Hill
Narrated by: Erik Synnestvedt
Try for £0.00

It isn’t everyday that an opportunity comes along to hear newly discovered advice for success in tough times book by Napoleon Hill, the legendary author of Think & Grow Rich, The Magic Ladder to Success, and The Master Key to Riches.

The Lost Prosperity Secrets of Napoleon Hill consists of a series of magazine articles Napoleon Hill wrote between 1919 and 1923 for Success magazine, for which he eventually became an editor. Hill's drive to become successful led him from the poverty stricken Appalachian Mountains to meetings with rags-to-riches tycoons. These articles focus on Hill's philosophy of success. Drawing upon the thoughts and experiences of a multitude of influential people, Hill explains how those successful people achieved their status. Many of these writings have been the basis of several best-selling books.

Listeners will discover principles designed to guide them in putting these steps to success into action. It is in these early articles that Hill honed his theories, refined his arguments, and polished his presentation of the success philosophy for the ordinary person.

A necessary handbook for our era, The Lost Prosperity Secrets of Napoleon Hill is filled with time-tested wisdom that resonates as strongly and as appropriate today as when it was first written.

"These early writings of Napoleon Hill’s, rarely seen before this, are refreshing and revealing." (Patricia G. Horan)

What listeners say about The Lost Prosperity Secrets of Napoleon Hill

This is a book that I will listen to often. There is a simple plan laid out in Hill's writings. You need only absorb it and put it into action to be successful at what ever you do. You'll find it an excellent investment of your time and money.

Another great book By Napoleon Hill. I happen to be prejudicial though because I like His message and if you really listen and study his information it can really open your mind to the opportunities available to you. The trick though, is to take action and prove or disprove his experience and knowledge. Just believing is not action. Remember that, if you want to study success and prosperity as defined by Napoleon Hill.

Information for the advanced person