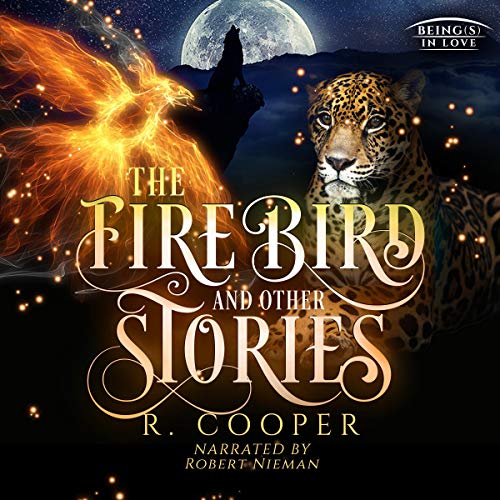 The Firebird and Other Stories

Magical creatures known as beings emerged from hiding amid the destruction of the First World War. Since then they've lived on the margins of the human world as misunderstood objects of fear and desire. Some are beautiful, others fearsome and powerful. Yet for all their magic and strength, they are as vulnerable as anyone when it comes to matters of the heart.

A firebird in 1930s Paris is drawn to a writer with a haunted past. Upon returning from fighting in the Pacific, a jaguar shifter finds a third-gender human on his doorstep. Early rock 'n' roll DJ Hyacinth the fairy shocks his listeners with his admiration for his quiet assistant. During the AIDS crisis, a gruff, leather-wearing troll dreams of a settled life with a mixed-species elf across the bar. An imp, who remembers only too well how cruel the world can be, tells himself he's content to stay behind the scenes - if only his chaotic, impish magic would stop getting in the way. And a shy human tending his poisonous and carnivorous plants is convinced no one will ever want him, certainly not the handsome werewolf grieving for a lost mate. Human or being, all must overcome fear to reach for love.

What listeners say about The Firebird and Other Stories

This series is wonderfully written. It's evocative, warm and sexy in a sophisticated way. The sense of desire runs through each story and threads from different shorts are subtly woven throughout. Oh and dragons... Don't forget the dragons.

This is one I'll be revisiting again and again.

The book and its stories are whimsical and brief. They are like cotton candy for the soul. Sadly, Robert's interpretation of the stories detracts from the content. Robert has a very pleasing voice, but his meter is off. It sounds like he is reading the story for the very first time. He pauses midsentence as if he has lost his place. A producer would surely know better than to let such slip ups pass. I'm afraid I must give him low Mark's for his performance.

I've enjoyed every book until this one

Like half of the stories I enjoyed regardless of the feeling that I was missing info or the times didn't match up but two were just terrible. Especially the fairy radio host where the focus on s clearly on the troubles of being gay in the 50s. It's just comes across as ignorant about how truly horrible things would be if you were discovered being gay. Apparently the fairy is too dumb to grasp that you WOULD be arrested if you flaunted your sexuality. The human character would have been lucky to live past the week after that final scene.

Great collection by a great author

I have loved this collection of stories and was thrilled to hear it read aloud.

Narrator has only one voice.

Most of the time you can't tell which character is speaking because there is almost no variation between voices. Also he reads that the character whined or growled or whispered but doesn't vary his voice to match the words.

The first story was a little confusing but it was fun to watch for familiar characters from story to story and the other books in this series.

Though I enjoy both fantasy and gay romance, none of these stories pulled me in with either.

it was so great

All the feels and history

I loved the varied Beings within this book. it also gave a look into a lot of different types of Beings. I do wonder what becomes of Casimir.