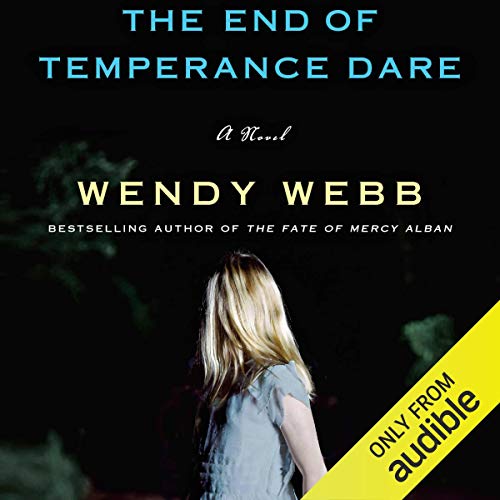 The End of Temperance Dare

Haunting and atmospheric, The End of Temperance Dare is another thrilling audiobook from the author reviewers are calling the Queen of the Northern Gothic.

When Eleanor Harper becomes the director of a renowned artists' retreat, she knows nothing of Cliffside Manor's dark past as a tuberculosis sanatorium, a "waiting room for death". After years of covering murder and violence as a crime reporter, Eleanor hopes that being around artists and writers in this new job will be a peaceful retreat for her as much as for them.

But from her first fog-filled moments on the manor's grounds, Eleanor is seized by a sense of impending doom and realizes there's more to the institution than its reputation of being a haven for creativity. After the arrival of the new fellows - including the intriguing, handsome photographer Richard Banks - she begins to suspect that her predecessor chose the group with a dangerous purpose in mind. As the chilling mysteries of Cliffside Manor unravel and the eerie sins of the past are exposed, Eleanor must fight to save the fellows - and herself - from sinister forces.

What listeners say about The End of Temperance Dare

Absolutely loved this spooky story.
Looking forward to my next book as this is currently my third and each one has a unique twist
Highly recommend

This is the second book I’ve listened to from this author and I’ve thoroughly enjoyed it. Just one irritation ;in this and the other book, The Stroke of Winter, the narrator really can’t pull off an English, Irish or Scottish accent! It doesn’t even come close. However, the narrator reads it beautifully which makes up for it.

Thoroughly enjoyed this story and though sometimes the narration for the male characters especially made them sound about 90 (when they were in their 40's) and made me imagine them with Zimmer frames, that really is my only gripe, as the story itself is superb and totally enthralling from start to finish. Will definitely be looking up more Wendy Webb!! 🙌🙌

truly brilliant story loved It!!! I think I have found a new favourite author. It has all the feels and the performance was done brilliantly.

Non-campy satisfying ghost mystery. No gore, so if you are looking for horror, you're in the wrong place. Looking for a twisty turny seductive ghost story? You won't be disappointed.

An old Sanitarium on a cliff a cliff overlooking lake Superior, what a perfectly spooky setting! Wendy Webb's stories are all somewhat similar, so if you have liked others you will like this one and the opposite is true as well. It's a bit predictable, but certainly enjoyable. Good spooky fun. And she always throws in some romance as part of the bargain. backstory is a bit loose, and only main characters are developed, but it's the atmosphere that makes the story. And Xe Sands does a great job with the narration. Fun for a bit of distraction.

Thoroughly enjoyed this book. The author has cobbled together a first rate ghost story. The narrator...Xe Sands...could not have been better Her relaxed conversational cadence enhances the development of the plot

WOW! I actually loved this story!!! My issue with a lot of stories is that you have main characters who experience something but want to keep it from everyone else in the story which usually creates more issues than if they had just said something. Not in this novel! The main character is upfront and believable! The story line is well put together. It doesn't drag out nor are there any outlandish themes that make the book unbelievable or cringy. I thought I had the end figured out, but I was happily wrong. The story is not overly heavy on any theme. It touches on many different things, but sticks to the story more than anything; which I appreciate. I feel like many authors today overuse current issues in their stories due to a desire to make their story appeal to bigger audiences.

Great listen. I enjoyed the story thoroughly. If I had this in hand, I would read it again.

I loved the premise and the setting for this book, but I tried three times and couldn't get through it. Absolutely no substance I could grasp onto here.

One of Ms Webb's best!

This was one of those books that hooks you from the very beginning! The twists are great! And I loved the ending. Although some may not. Fantastic ghost story!

A Masterpiece of Gothic Fiction

Eleanor Harper has been a crime reporter all of her life, and the constant exposure to violence and death has taken its toll. She's not exactly heartbroken when she loses her job, feeling ready for her life to take a different turn. That's when she sees that the director of Cliffside Manor is retiring, and she decides to apply for the job. She knew Penelope Dare from years earlier when Eleanor had been assigned to investigate the mysterious car crash that killed Penelope's father and sister.

Cliffside Manor, Eleanor discovers, had been built in the height of the tuberculosis epidemic in the early 1900s, and served as a sanatorium. Once a cure for the disease was discovered, the Manor's founder turned the rambling mansion into a retreat for writers and artists. Although Eleanor has no experience in that area, she is pleased when she gets the job. It doesn't take long, however, before she realizes there is a darker side to Cliffside Manor than its history as a "waiting room for death."

Wendy Webb is truly a master at creating a creepy, haunting Gothic atmosphere. Intertwined with the paranormal elements, she has also incorporated a murder mystery. With a diverse cast of sharply etched characters, the tale is engrossing. many twists dragging the reader along from page to page. The only weakness lies in Webb's heroine's naivete--a common flaw in this author's heroines. We realize long before Eleanor does that certain characters are actually ghosts. This time, however, the reader has no way to predict how it all turns out. "The End of Temperance Dare" would make a fantastic motion picture.

Xe Sands does an outstanding job of narrating this intriguing tale.

Love Wendy Webb! She hooks me from the start then blows me away with her unexpected endings! This is one of her best!

Another good one from Wendy.

I was very excited to find a new story from Wendy Webb. Her works are right up my alley. This was good... not my favorite. But good. The characters and settings could have been fleshed out a bit more. Overall, still in line with what I love about her work.

WOW! I can't describe how all the twists & turns kept me looking for the next bit of mysterious info. This story has wrapped me up & placed me among the characters at Cliffside Manor.