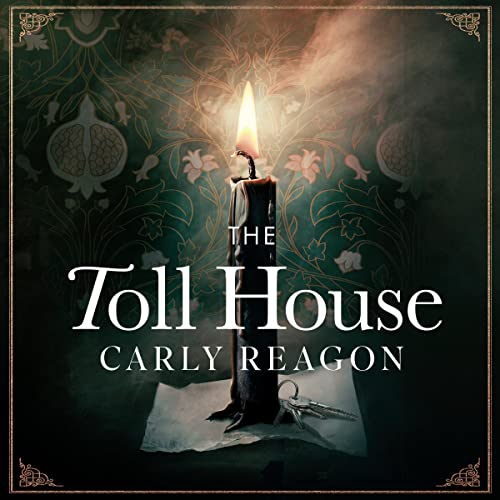 By: Carly Reagon
Narrated by: Antonia Whillans,John Sackville
Try for £0.00

The spine-tingling ghost story everyone is raving about:

The past isn't always dead and buried.

A house with history. That's how the estate agent described the old toll house on the edge of the town. For Kelda it's the perfect rural home for her young son Dylan after a difficult few years.

But when Kelda finds a death mask concealed behind one of the walls, everything changes. Inexplicable things happen in the house, Kelda cannot shake the feeling of being watched and Dylan is plagued by nightmares, convinced he can see figures in his room. As Dylan's behaviour becomes increasingly challenging, Kelda seeks answers in the house's mysterious past. But she's running out of time.

Because something has awoken.

"If you like a good ghost story, put this chilling thriller to the very top of your reading list." (Sarah Pearse, international best-selling author of The Sanatorium)

"I hoovered this up in one go. It's perfect for the spooky season. Be prepared for some seriously good twists." (Natasha Pulley, international best-selling author of The Watchmaker of Filigree Street)

"A book that feels like it's watching you...unsettling and gripping' (Cari Thomas author of Threadneedle)

What listeners say about The Toll House

I loved this book. After a dubious start, unsure about the main narrator I soon got used to her voice. I found to me she spoke dramatically even during the general story, however I soon got used to her and thoroughly enjoyed it. The male narrator was great too, both speaking very clearly and no noisy swallowing which can somehow be heard listening to books. The whole story was very well thought out, what an imagination the author has! I really didn’t want it to end so am looking forward to her future books! Thank you for an excellent read.

This is an astonishing read and I couldn't stop listening, finished in 2 days. It is genuinely spooky and had plenty of twists. The characterisation is spot on, every player is believable. The writer has a very emotive style, I understand this her debut and I can't wait for more of her stories!

Wow! What an AMAZING book👏🏽and narration the BEST!👏🏽

This was absolutely AMAZING BRILLIANT! Exactly what i love in a book! Creepy, interesting story. Not sure if this is a new author as there’s no more books on here? But wow what a talent 👏🏽👏🏽 both the male and female narrator’s were EXCEPTIONAL 👏🏽💯 there was a bit near the end that I nearly jumped out my skin😱😰🤣 i had headphones on and at full volume 🤣 I won’t say anymore but I wasn’t expecting it at all!😱🤣👏🏽 brilliant brilliant brilliant! Please keep them coming 🙏🏽🤗 thank you for an AMAZING story! 👏🏽👏🏽💯💯 and thank to both narrator’s for OUTSTANDING reading! Thank you audible for another BRILLIANT book! Highly recommend!💯💯💯🥰♥️♥️♥️xxx

Interweaving the present with the past, this superlative ghost story builds steadily to a racing conclusion, enlivened by myriad sub plots. What is the dark secret of the toll house and what chains the vengeful spirit of a 19th century murderer to it? The narration was first class, with John Sackville imbuing the character of the obsessive bereaved husband with emotional intensity. The very last chapter imparts a twist to the story which I never saw coming. So, if you like ghost stories packed with menace, this is for you.

Good story, well narrated. Unsettling. It would make a great film too. The narrator was excellent imbuing the reading with a sense of unease.

Enjoyed this one - listened over a weekend
The female narrator is a bit monotonous but she carries the story and it’s genuinely creepy. Worth a listen for sure

I predicted early on this book would be a five star read and my goodness I was not wrong. This book was brilliant, amazing atmosphere, loved the characters, the whole premise of the story. It's just bloody great. Go pick this up and enjoy one of the creepiest reads I have read to date.

Similarly to some of the other reviewers, I'm not usually a huge fan of time-slip novels and this one was no exception. I've listened to it twice now and was relieved that I knew the story well enough the 2nd time around to be able to skip over the parts where it goes back to 1864. That being said though, the male narrator did a very good job - I just found the character he played irritatingly intense and erratic. The more you hear his side of things the more it becomes clear why he's so intense, but I wish someone had mentioned that it contains elements of abuse. I found that massively triggering and probably would've avoided it altogether had I known beforehand. That part doesn't take up a lot of the storyline, so if you can handle about 1/4 chapter of it being discussed then you should be fine. I just happened to listen to it when I was working through some personal stuff and found it very uncomfortable to think about.

The female narration was too 'drama school try hard' for me. A good story tells itself and gets helped along by a good narrator. Her delivery - to me at least - felt like she believed she had to tell the entire story with every ounce of her being as though she was delivering an intense Shakespearean soliloquy or something. Even if the lead character was just making a cup of coffee it sounded like the most dramatic/harrowing thing ever. It got very annoying after a while and I just wanted to shout 'calm the heck down, woman!'. A previous reviewer mentioned that she had a tendency to make even the mundane stuff sound dramatic and I couldn't agree more. She wasn't bad per se, but she certainly could've toned it down a little and let the story 'tell itself' more effectively than she did.

Despite those issues, I did actually really enjoy the story and agree that the historical background of the house was interesting and kept me hooked so that I could see how everything resolved itself in the end. I definitely won't willingly listen to another book narrated by Antonia Whillans but at least it's not put me off Carly Reagon's writing.

Really enjoyed this story and I thought the readers were excellent.

Looking forward to more stories from this author.

A bit of a trope and very cliched. The main character was dull and roused very little interest, empathy or sympathy.