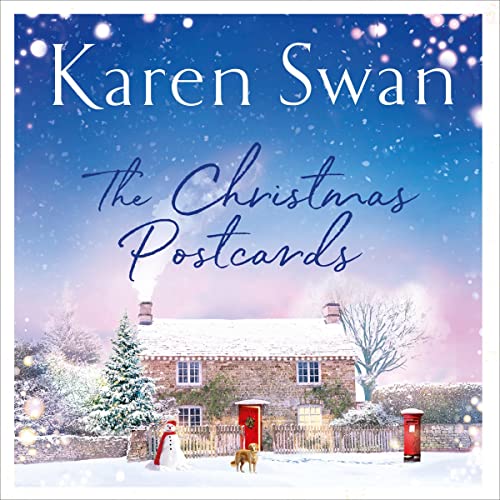 By: Karen Swan
Narrated by: Kristin Atherton
Try for £0.00

Set in a chocolate-box village, a woman makes a surprising connection with a pen-pal that will change her life - and warm your heart - in the new novel from Sunday Times bestselling author Karen Swan.

It had been a make-or-break holiday for their marriage, but Natasha and Rob’s rekindled romance is short-lived when their daughter’s beloved soft toy disappears on the journey home.

As Natasha comforts the distraught child, she turns to social media for help. Miraculously, the toy is found, but it has become the lucky mascot of a man named Duffy, who is thousands of miles away.

When Duffy promises to keep Natasha updated with pictures, the pair begin a correspondence that soon becomes more meaningful to both of them. Sometimes, Natasha feels this stranger understands her more than the man lying next to her.

But as the weeks pass and Duffy heads deeper into the mountains, Natasha begins to notice a change in him. Then one day, the messages stop. Too late, Natasha wonders why he had ever needed a lucky mascot at all.

From the picture-perfect Cotswolds to the majesty of the Himalayan foothills, The Christmas Postcards is a novel about how the closest connections can be the furthest apart.

What listeners say about The Christmas Postcards

As usual with Karen Swan books I could have sat & read this from beginning to end in one go.
A lovely story set in the snow, a nasty character & a knight in shining armour. perfect read to
cosy up with and a Do Not Disturb sign on the door

Not as good as usual Karen Swan books. Found it quite boring until the last hour or so.

I normally find Karen’s books to have a surprising twist but like other readers I guessed early on the outcome. That aside, this book probably gripped me from the beginning more than any of her others and I finished it in just a couple of days which is surprising for me. I suspect I’ll be digging it out again for a second read at some point in the future as I just loved it!

The narrator was fabulous too and really brought the story to life.

From start to finish this story held me captivated. The narrator(s) were brilliant and just brought everything to life. The twists and turns were great and not always as I imagined. Definitely an audiobook to immerse yourself in. Hope you enjoy it as much as I did.

So much more than I was expecting. Was a pleasure to listen to in one weekend and made my insomnia worthwhile for once! Gripping story with excellent characters, brilliantly brought to life by Kristin Atherton’s narration - she is my favourite narrator, and this didn’t disappoint. More emotional than the Christmas romances I’d purchased at the same time, but so much more enjoyable for it. I’ll be exploring more by this author - the best book I’ve listened to for a while.

Another great book by Karen Swan

Loved it. It was well read with a super storyline. I always enjoy Karen Swan’s books.

Really enjoyed driving to work listening to this. Drive slowly some mornings so I could hear more. Cringed a little at the narrators voice for Mabel but marvelled at how she changed so seamlessly between make and female characters. Highly recommended listen xx

Not quite the fluffy Christmas story I expected, but wow, what a emotional journey. Fantastic narration.

This is the first Karen Swan book I've read but it won't be the last. I read it first as a book but loved it so much I downloaded it on audible and listened to the story again. Listening to the story adds so much more depth and really brings the characters to life. The slower pace allowed me to take in the words with more meaning and intensity. I highly recommend this as a book and on audible too.

Not as Christmasy but very intriguing

The narration really good. The story was quite lovely and intriguing, but not as Christamsy as expected. All in all time well spent listening 8/10

Loved the narrator and the book. A little predictable at times, but that didn't detract from the story. The author made these characters and their experiences truly come to life.

This Book was Is Simply Wonderful

This book was both fascinating and a beautiful love story! I cannot recommend this book highly enough!Ialways love listening to any and all Karen Swan books,but this one was exceptional.