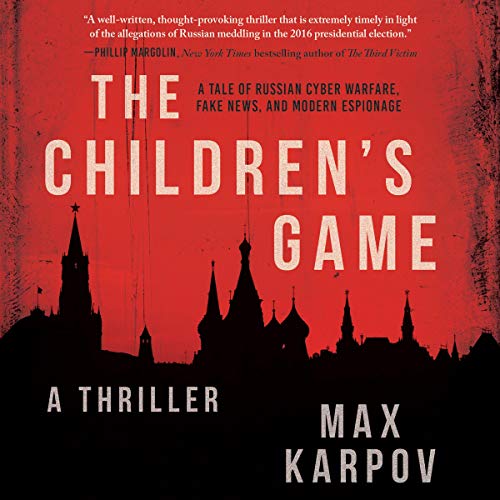 By: Max Karpov
Narrated by: Todd McLaren
Try for £0.00

The CIA has learned that the Kremlin is about to launch a sophisticated propaganda operation aimed at discrediting and disrupting the United States and ultimately restoring Russia to great nation status. Intercepted intelligence suggests that the operation will hinge on a single, breaking news event in Eastern Europe, supported by a sustained campaign of disinformation and cyberattacks. Code-named the "Children’s Game" - a chess stratagem that leads to checkmate in four moves - it was probably conceived by a Russian billionaire and former FSB officer named Andrei Turov. For years Turov has been developing the infrastructure for a new kind of warfare that exploits weaknesses in western democracies and manipulates public opinion. His organization offers the Kremlin plausible deniability.

But the United States has its own secret weapon: Christopher Niles, a former CIA intelligence officer, who understands Turov's ambitions and capabilities. It falls to him and his small team - composed of his journalist half-brother Jon, a special forces operative he would trust with his life, and Anna Carpenter, a resourceful US senator with deep roots in the intelligence community - to unravel Turov's plot and restore truth to a world spiraling into chaos.

The Children's Game is a frighteningly realistic, timely thriller that delves into the secret corners of Vladimir Putin's Russia, exploring the shifting world order and the murky realm of US-Russia relations.

What listeners say about The Children's Game

The Children's Game is an amazingly realistic story about a Russian gambit orchestrate and then to blame the US for an apparent assassination attempt on Russia's president Vladimir Putin. It is an intricate and well written novel that suffers only from a less suspense and action than I would like from a thriller. The author is a US journalist; this is his first novel. Narration is perfect.

Very weak story, cliched characters, nonexistent tension. I don’t understand the positive reviews/comments. A good book could have been written about this subject but this is not it!

Of course this is about Russia, the CIA, Putin, and Russia’s plans to make the U.S. a far away satellite. It is realistic and provocative. Happily there is no goofy Trump.