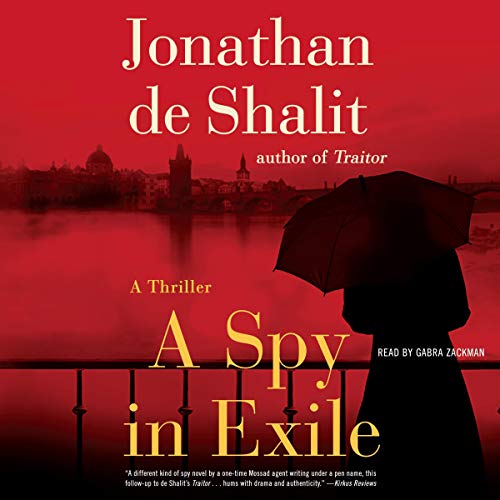 A Spy in Exile

By: Jonathan de Shalit
Narrated by: Gabra Zackman
Try for £0.00

From the author of the internationally best-selling “supremely effective, cunningly crafted” (The Providence Journal) thriller Traitor, a cerebral and suspenseful novel of high-stakes intrigue in Israel’s top intelligence agency.

After Ya’ara Stein is forced out of her job at the Mossad - the secret intelligence service of Israel - she is called upon by the prime minister for a classified job. Known for her aptitude, beauty, and deadliness, Stein is asked to set up a secret unit that will act independently, answerable only to the prime minister.

This streamlined and deadly unit, filled with bright young men and women recruited and trained by Stein, quickly faces threats both old and new. Descendants of the lethal militant Red Army Faction have returned to terrorize Europe, and fears of a radical Islam splinter group force the unit to distinguish between facts and smoke screens. As Stein’s cadets struggle to crush these threats, they soon discover how easily the hunter can become the hunted.

A dazzling, tension-filled novel that sheds light on the world hidden just below the surface of our everyday lives, this thriller offers a peek into the dark behind the curtain where today’s deadliest conflicts are fought. With breathless pacing and shocking twists and turns, it proves that Jonathan de Shalit “has learned well from the likes of Mr. le Carré” (The Wall Street Journal).

What listeners say about A Spy in Exile

A good story, well written but spoiled by the narrator, poor accents and painful to listen to.

The first novel by Jonathan de Shalit, Traitor, I thought was a much better read and listen than this novel. It had a somewhat-original plot, but I struggled to keep locked in to this book.The narration wasn't bad, but also not great, especially when compared to the other fantastic narrators in the thriller genre. If you really enjoy thrillers, give this book a shot. If you're just checking out the reviews and aren't set on it, I'd pass.

This is not a conventional spy novel (although "spy" is in the title), thriller is a better description - and I was really drawn into the story. Very deep characters, beautiful locations, interesting psychologically. Great narration with a lot of characters and some accents.