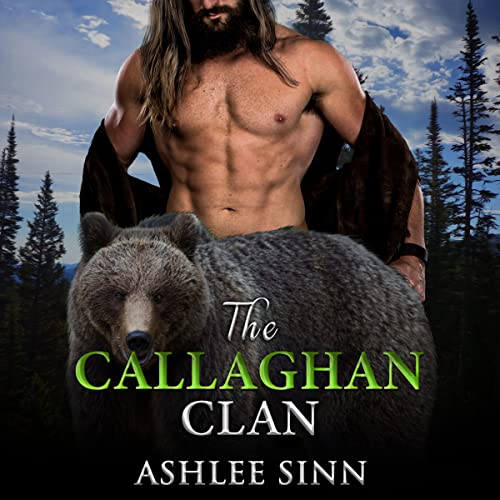 By: Ashlee Sinn
Narrated by: Clare Radix
Try for £0.00

Join Brandt (the reluctant alpha), Brennan (the hopeless romantic), and Bo (the womanizing playboy) as they search for love and happiness in Alaska. While they’ve stayed hidden for centuries, their world is about to change, and each brother will need the strength of a mate by his side to survive.

What listeners say about The Callaghan Clan Box Set

I really enjoyed listening to these books with one exception. Book two sounds terrible. Please don’t ask the person reading the book to do the stupid voices again. It really detracts from the enjoyment. The stories about the grizzlies follow on really well from the previous boxset. I will be listening again but will miss out book two. Can’t cope with the terrible accents.

I loved listening to Clare Radix, perfect for this boxset.

So enjoyed listening to this great book. Each book is a complete story of one of the Callaghan clan. These books were a quick fun and sexy.

We find out and fall in love with Brandt then ,Brennan and Bo. Each having to step up , but also find love. Also loved the addition of wolves, tigers and a witch . So very swoony scenes ,
The Alaskan territory sounded beautiful

I loved listening to the audiobooks, the books were well written and all the characters were interesting. The paranormal stories were about their father the loved and respected alpha of the bear clan was very respected by those around until he was killed. The alpha was killed and made him look like poachers killed him. The brothers were sade but they want to find out who did it. The oldest son of the alpha new he was to step up to take over from their father, and he needs to find out who is doing the killings of his clan. The last thing on their minds was to full in love with their mates. I found these books to be heart warming to read and listen too that I had at times tears in my eyes from mixed emotions. I loved the books.

This is a very enjoyable shifter book. With a ruthless storyline and well developed characters it’s a good start to this series.

This storyline was a lot of fun as well as graphic. The book is written very well and the characters are growing. It’s really enjoyable.

With the added twist of other paranormals this book could possibly open up a whole new branch of books. I’d love to read/listen to more from these characters and this world. Fantastic performance.

Not your average shifter books

I enjoyed this box set as it was a nice easy read. Great characters you can relate to, with back stories that are to the point and then straight into the main story.
I like the length of these books individually and the box set overall.
Didn’t want to stop listening as was happily enthralled in the storyline wanting to hear what happened next.
I do recommend this set as it’s a good all rounder changing some of the usual perspectives that shifter books have.

I received this box set in return for an honest review. Thank you- an enjoyable listen.

The Stories are about 3 brothers, Grizzlies Shifters and finding mates. Though the storyline was alright it seemed the whole books were designed around the Sex and sex scene in the books. Storyline was disappointing and Could have been Very good with more depth to it. Narrator was fair, I thought the grumbling sound added to the voices when the shooter's animal was showing through did not match the characters.

If you like shifter books you will like this. All the books in the box set are good.

This was a great box set. I enjoyed listening to the Callaghan brother find love. I hope they have a story about Major and others finding love too.

Ashlee did a great job writing these entertaining shifter stories. It had exciting and love adventures that keep my attention.
Clare was a great narrator. She could do male and female characters with ease.

The narrator is awful. Like the story but will read on Kindle. Sounds like a Sesame Street character