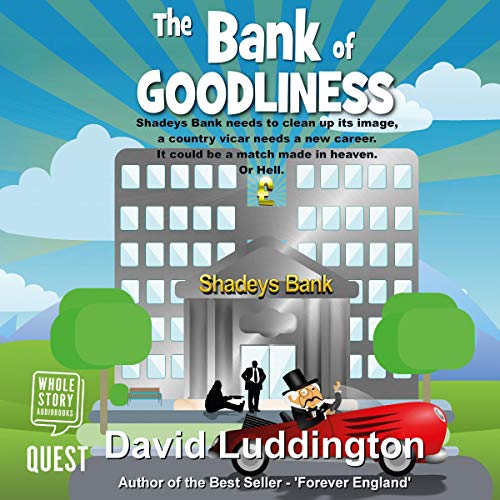 The Bank of Goodliness

By: David Luddington
Narrated by: Nigel Planer
Try for £0.00

When Shadeys Bank loses another CEO to a scandal, they are desperate to show they’ve reformed. Who better to present their redemption than a country Vicar?

Reverend Tom Goodman is ousted from his job as a country Vicar for allowing a homeless family to stay in the church hall. Meanwhile, a major bank is trying to rescue its image after the latest in a long string of financial scandals. It seems like the perfect match, and Goodman is hastily appointed as the bank’s new CEO. All they have to do is promote him as their new figurehead whilst also keeping him away from the day-to-day business of dubious banking. Unfortunately for Shadeys, Tom is planning on making a difference. And so begins an epic battle of wills. The might of a multi-billion-pound bank versus a seemingly naïve country Vicar.

What listeners say about The Bank of Goodliness

I find I am searching for David Luddington's next book already! As with his earlier books, the characters are a motley mix but made so real by both the author's writing and Nigel Planer's superb narration. Unlikely plot but the characters sweep you along until the story becomes believable and you don't want to stop listening.. Next bool please!.

First one of his books I've read, really enjoyed it and will definitely read the rest. Easy to listen to and some good laughs.

A little silly, in a very British way, which I love. Dry humor, the aristocracy and ostentation wealthy are mocked mercilessly, and there's a happy ending to boot. Just the thing to bring you back up with all the terrible news during the pandemic. David Luddington is rapidly becoming one of my new favorite authors.

What happens when a man with scruples pokes his finger in the eye of a Big Bank; consequences, but for whom?
Nigel Planer is a great narrator!

Hard to put down!

I thoroughly enjoyed this book! I was disappointed when it came to an end, but was quite satisfied with how it ended. I hope David Luddington has written other books that I can read.

I stuck with this one a lot longer than I would have because of Planer’s excellent narration. Unfortunately, he couldn’t save a book with a plot and characters that make daytime soaps look rich and complex. I’d give this one a pass.

The main character was just such an absolute idiot. The next line will contain a trivial spoiler. The main character after given clear instructions on how to use the most simple of devices was still absolutely baffled by an intercom on a phone. His inability to grasp the most basic concepts was beyond frustrating to listen to.

I love this book. I’ll be giving it a listen again soon. I highly recommend this book and very funny listen.

what a great book

the story is entertaining and takes you new places.very good reading,too.loved and enjoyed the storyline