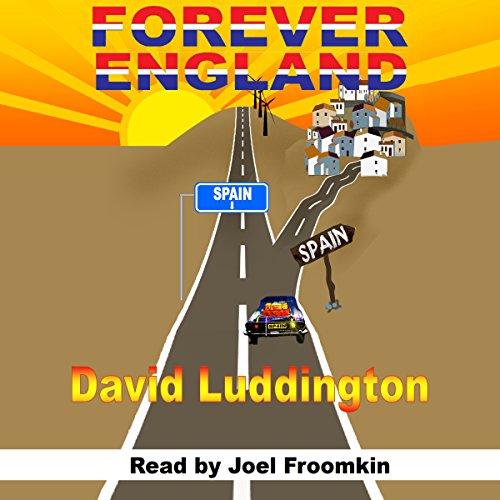 By: David Luddington
Narrated by: Joel Froomkin
Try for £0.00

And there will be a corner of some foreign field that will be forever England.

Only these days it more likely to be a half-finished villa overlooking a championship golf course somewhere on one of The Costas.

Following an unfortunate encounter with Spanish gin measures and an enthusiastic estate agent, retired special effects engineer Terry England is the proud owner of a nearly completed villa in a new urbanization in Southern Spain.

Not quite how he intended to spend his enforced early retirement, Terry nevertheless tries to make the best of his new life. If only the local council can work out which house he actually bought and the leaf blowers would please stop.

Terry finds himself being sucked in to the English ex-pat community with their endless garden parties and quests for real bacon and Tetley Tea Bags. Of course, if it all gets too much he can always relax in the local English Bar with a nice pint of Guinness, a roast beef lunch and the Mail on Sunday.

With a growing feeling that he might have moved to the wrong Spain, Terry sets out to explore and finds himself tangled in the affairs of a small rustic village in the Alpujarras. It is here where he finds a different Spain. A Spain of loves and passions, a Spain of new hopes and a simpler way of life. A place where a moped is an acceptable means of family transport and a place where if you let your guard down for just a moment, this land will never let you go again.

Forever England is the tale of one man trying to redefine who he is and how he wants to live. It is a story of hope and humor with an array of eccentric characters and comic situations for which David Luddington is so well known and loved.

What listeners say about Forever England

Entertaining listen for all Spanish holidaymakers

Lovely romp through the international English. The narrater created slightly clichéd accents but that probably supports the characters involved.

I loved this book soooooo much!!!

I was looking for a light listen to tackle my Saturday household chores and this book delivered. In spades.

It was fun and funny and incredibly well written. The author and narrator were seamlessly of one mind and together they firmly planted you into Terry England's world and you reveled in his (mis)adventures.

The narration was so stellar that there was a point around chapter 6 where the character Simon Farrington is speaking and it was done in such a different voice and cadence that I stopped and just marvelled at the brilliance.

There are no great villains in this story nor are there any intricate plot twists. You listen for the simplicity of Terry England's world, or his struggle to find his place in it, and the brilliant narration that helps guide you along.

What a great listen!!

Cheery book about a British Expatriate who retires to Spain with his wife and dotty mother in law, and rediscovers himself. By leaving the expat community behind, he finds himself again, and comes to know joy.

I found this book by David Luddington mildly

I found this book by David Luddington mildly humorous and not very entertaining. It was well narrated by Joel Froomkin but I struggled to remain interested. Bottom of the second tier in my library with other background noise.