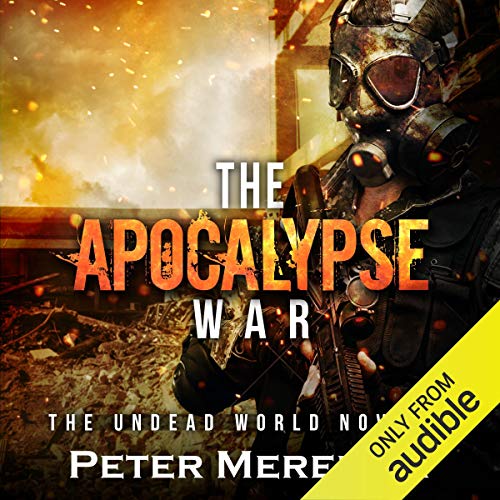 By: Peter Meredith
Narrated by: Basil Sands
Try for £0.00

The action-packed conclusion to the seven book series The Undead World!

The people of the Estes Valley have found their peace destroyed as they are attacked by the single greatest army left in the world. Not only do they have to contend with an army of men equipped with the latest hi-tech military gear, they also have to battle a horde of undead half a million strong.

But, perhaps worse than all of this, they have to deal with a seven year old girl - Jillybean. Cruelly coerced into helping her enemies, Jillybean bends her mind to the destruction of the valley, the death of kings, and the loss of her own soul. And when Jillybean puts her mind to something there's no saving it, ever.

Against this overwhelming force is pitted the iron in Grey's muscles, the quickness of Sadie's feet, the determination in Deanna's steel blue eyes and...and small and weak Neil Martin, whose greatest gift is seeing the good in people and ruthlessly killing them if he has to.

The Apocalypse War is upon them and survival is all that matters.

What listeners say about The Apocalypse War

Been living the series so far, but this one … well, it’s far fetched…
To the immortal captain grey to hundred of thousand zombie horde, where hardly any body gets killed. Marvel has nothing on this

another brilliant book in this fantastic series, I never want this story this to end

I found this & the last book difficult at first with the change in Jillybean. I had to step away & read another book, however when I came back I couldn’t stop & read nearly all in one go. Heartbreaking, exciting & elating but definitely not all at the same time. What next?

Loved it from start to finish!

Is this really the last one Peter and Basil? I want more, although wanting more is the best way to leave a book I suppose. I'm going to start from the beginning again and hope by the time I've finished there will be another book telling us how jillybean progresses, Neil and Sadie find love (but not with each other of course) and the valley faces more zombie and baddy danger. Please?

I love these books and can't wait for the final instalment, though I don't want them ever to end! Jillybean breaks my heart but I'm hoping she gets the happy ending she deserves in the last book. Narrator does an excellent job too!

No greater love than this, that a man lay down his

The blistering pace and unrelenting action of this book will make it hard to put this one down! Peter has done a wonderful job building these characters into people you actually care about and when one character finds themselves in a precarious position you not only worry about their safety, but the impact it will have on the others' psyche. Even the terrain becomes sort of a character in the way it is described and used as both a tactical advantage and an obstacle. A lot of detail went into the ingenious tactics used by both the soldiers of Colorado and by the Azael which is, imo, the highlight of the story.
The Jillybean story line is as heart rending as anything I've read from Peter and the rest of our apocalypse family shows what can be accomplished when you fight for each other and can be summed up by this quote from the book: "No greater love than this, that a man lay down his life for his brothers" !

This one has everything folks! From drama to intrigue, to zombie blood and guts to all out modern warfare and everything inbetween! So,if you like non stop thrill rides, you will not be let down, as this lives up to it's title: WAR!

Everyone feels too guilty....

It becomes a tiresome mantra- everyone blaming themselves for personal over achieving & making the hard choices for the weak & timid. The story is interesting but I find myself rolling my eyes every time one of the characters launches into a self indulgent guilt trip.

being apocalyptic there are some deaths and even strategy scenes that will p**s you off perhaps a little...but as I was mad I realized that just having me that emotionally charged meant this is some good stuff. the nasally voice of the narrator is off-putting at times, making characters sound whiny instead of the I tended emotion, but overall another win.

Wow! What a great book, and a hell of a way to tie up the series! I wish I could magically forget them all so I could listen to the whole series again. Very well written and does well to keep you on your toes constantly. I hope that he writes more in this series, there's so much more that can be said about the undead world.

4-6 were a bit rough. This book brings back the tense and complicated horror of the apocalypse. Well narrorated, as always.

I am not easy to please. Peter Meredith has a pleasing mind and writing style. For me it's a thrill ride with tons of emotion. I cannot wait to continue.

I love this series so entertaining

Every chapter holdsvu white knuckled a craving whats to come next! The development of such well constructed characters makes you fall in love and leaves you comparing them, with all their faults and weakness, naked truths, strengths, ambition and raw courage in desperate times to people you know and love wondering if you would be able to survive in such a desperate and violent world! highly recommended to anyone wanting to read a series full of everyday unknown heros and rotten to the core villains!!

Jilly Bean is the new Frodo.
With a slight touch of Hannibal Lector.
The series is a must read for the Zombie enthusiast.