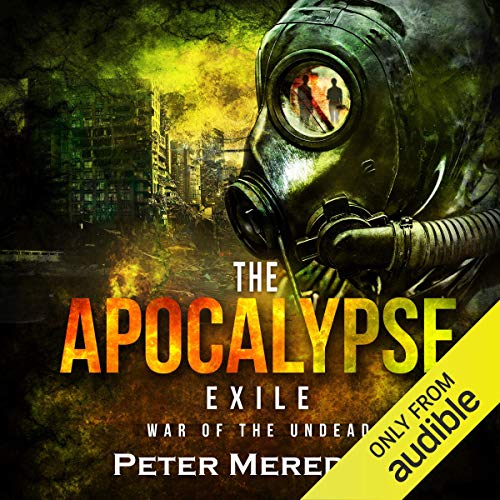 By: Peter Meredith
Narrated by: Basil Sands
Try for £0.00

The journey across the zombie-filled country does not get easier for the renegades. The Great Plains, the heartland of America, is now home to vast herds of the undead. These savage hordes sometimes stretch as far as the eye can see. Among them live the Azael - men who have regressed back to the bloody and chaotic roots of our collective ancestors where only the strong or the blood-thirsty survive.

These far-flung tribes control the interior of the country, using great armies of zombies to inflict their will upon their neighbors. For the moment they are at peace with the soldiers of Colorado and for the moment they only see in Neil and the Renegades a way to make easy money escorting them across their lands at a steep price.

The specter of death lurks among the group. It haunts them and strikes again and again until its appetite is whetted to a point where it can no longer hide behind the innocent face of Jillybean. What skulks in the depths of her mind is driven by ferocious desires, chief of which is the hunger for death. It's a hunger that will never be satiated until each and every one of them is dead.

What listeners say about The Apocalypse Exile

Only in chapter 21, I’m enjoying it …. But… no zombies!! Yes, u hear about a hundred or so herd around a safe place, but so far that’s it.
The drawback of this book is jilly bean.. I love this character, don’t get me wrong. However, it’s about her different mind set constantly and her ‘dark’ place . Once, fair enough, but to hear it constantly does get a bit tedious. A chapter about her dream was just a bit too far. 🙄

That's what means it's good to listen to and am invested in the storyline after 6 audiobooks...
.. 4 more to go 😊👌

Another fantastic book by Peter Meredith.
this is book 6 and still every bit as gripping as the first.

enjoyable as always left on a cliffhanger again

love it.. amazing just like the rest of the series!!! can't wait to start on the next one.

WAY WAY Too much

I get the zombies, but having a 7 year old girl kill a new born baby then plotting on a baby in the womb of its mother is just to much, plus all the comments about murdering a baby is a little morbid, had me until that I will not be continuing this series. A baby murdered by a 7year come on not even a cool read or idea, just wrong, I guess being a parent hit home. Jilly bean could have been a better character in the future. Good luck with series it was good to book 6.

I wanted to see these books thru and I feel I'm wasting my time. bought the whole series because 1 and 2 were good. Peter has run out of ideas and possibly money too. which is why I believe he pushed these last 4 books out in a two year span.

books 3-6 are the same plot over and over. jst google the plot save credits

Last audio I'll will purchase by this author

I liked this book in the series. I don't think it was too focused on Jillie Bean. I particularly like where it's heading with her.

Too much about Jillybean

I loved all the other stories. I miss Ipes, but that's story progression. However, there was way too much time spent on Jillybean. I wanted more time with the other characters.

6 down, 4 more to go! I'm more than impressed. I usually not much into long series as they tend to get repetitive. But, I am completely hooked and the next book is downloading as I type!

everyone thinks the apocalypse will be some Rick Grimes vs the world and the good will always win. and this book shows you that's not true evil will always be there... all around an amazing story

All I can say is WOW! Another no-holds-barred gritty story. I think the author paints a true picture of human nature at its worst when the rule of law has collapsed. I'm going to start listening to the next (last in the series) book in this series right now!