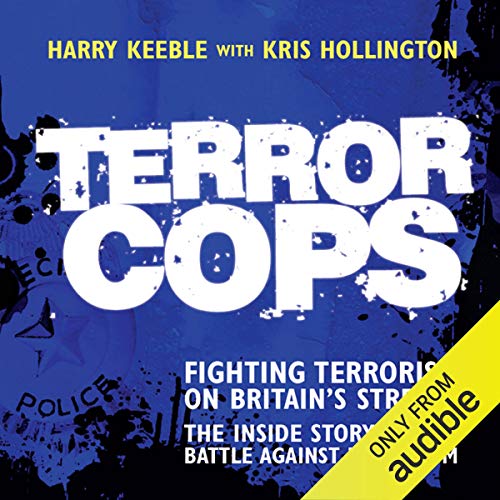 By: Harry Keeble,Kris Hollington
Narrated by: Damian Lynch
Try for £0.00

Terror Cops is a white-knuckle ride into the battle against extremism; the story gives unprecedented insight into what it's like to fight terrorism in Britain today. In his two-decades-long career with the Metropolitan Police, Detective Sergeant Harry Keeble has hunted child murderers and child abusers, drug dealers and hit men.

And then, in response to the call to arms in the wake of the July 2005 London bombings, he transferred from Hackney's Child Protection Team to S-Squad, an elite counter terrorism unit. From day one he was thrown into the front line of a number of heart-stopping operations that involved deadly armed hunts for suicide bombers and bomb factories. As Harry won respect for his bravery and commitment, he was asked to lead increasingly complex and sensitive missions. Terror Cops covers, among other subjects, the Haymarket bomb, the Glasgow airport attacks, the liquid bomb plot, how terrorist cells are created, the use of terrorist training camps in the UK, and working in tandem with the Muslim community.

What listeners say about Terror Cops

Well narrated but this is the memoir of someone who had a very uneventful stint as a 'terror cop'.

The most exciting part was probably when a cigarette weilding youth asked him for a light, closely followed by the temporarily mislaid radios drama. Though who can forget the hitman who arrived, did nothing then went home or the race against time to get a twig out of the way of a CCTV camera.

On top of that this is preachy, right on PC garbage. I don't want condescending lectures on Islam from some muslim officer in a book like this any more than I would want a load of bible bashing if they were after the IRA. It is irrelevant and annoying.

Crack House was a great book and I'm guessing the author made a lot of money from it which encouraged him to write another when he really had nothing to say.

I was very disappointed in this book. I had really enjoyed Crack House an excellent book which was exciting, informative, had a narrative drive and really reflected the author's front-line role in the Met.

In contrast I found this book only sporadically interesting and definitely got the impression that the author was struggling to find something dramatic to say about a role (surveillance) which is obviously extremely important but yet often tedious. As well as lacking the excitement of his drug squad days it also lacks the `whole picture' involvement that one might get from an investigator's tale.

I found that the attempts to create artificial drama really got on my nerves too - training, random encounters in the street etc all got the James Bond treatment, which probably tells you as much about the co-author/publisher as Harry.

The narrator is a bit laddish too, but that probably was thought to suit the genre by the publishers.

I wanted to like this book, but ultimately I'd not bother with it.

The first book was really good and the reason I bought this one. However, this is a disappointing rehash of terror and racism statistics which are in the public domain, stories that were not related to the author and potential terror plots that never materialise, like the time that we lost our radios....and then found them again or the time we were called in and then nothing happened....the time we were watching a guy who turned out not to be a terrorist. it's fairly obvious that compared to the previous book, this one lacks material and has been stretched paper thin to just publish another book.

Good listen for an intro to anti-terror policing

The book describes some recent terrorist convictions in the UK, the life of an anti-terrorist officer and background on the global intelligence operation. There are a few rather clunky chapters where the author has chosen to make points via a conversation. I was talking to so and so and said “These damn fundamentalists”, so and so said “They are not fundamentalist, a fundamentalist is …” but these didn't bother me too much.

Overall I enjoyed the book. It is certainly not a work of literature but I felt that the writing style worked well given the subject matter and that the narrator did a great job. I proved a real eye opener for me as much of what is covered doesn't make the news headlines and I have already recommended it to others.

Overview to those in the shadows, good and bad

Would you listen to Terror Cops again? Why?

As a narrative to a highly skilled and specialised role, the book delivers a broad understanding of the highs and lows, action and frustration which is associated with the fight against terrorism. It is a book you will listen to once and be internally thankful that there are vigilant and patient souls out there protecting us all.

No real ending, as this is a non-fiction account. The next terror plot is only around the corner for these guys to break.

Would you be willing to try another one of Damian Lynch’s performances?

Sorry to say that I found Lynch’s narration a bit off-putting in the verbalisation of different accents and voices. It would have been far more engaging without them. His street talk was funny doe, innit bro.

I could have easily sat through at least half the book in one sitting, but instead used it for commutes and 1 hour bursts. The fact that the individual chapters are mostly standalone, allows you to dip in and out without too much disturbance to the journey or the narration.

An enjoyable and informative read into events which were in the news as well as more low-key operations. In many cases, I yearned for more technical detail and strategic thinking/planning, which I feel would have been possible without giving away any operational secrets.

Listened to all of them. Enjoy the way the story is relayed. Narrator is great also

I enjoyed this titke makes great reading for those who are interested in the lifestyles of the operatives in our special operations personnel to counter terrorism in the streets of the United Kingdom.

Full on interesting facts to the present history of those who attempt to kill, lame and destroy lives of everyday people, yet behind the scenes their are Special Branch Officers working tirelessly to intercept monitor and undermimd the actions of those who intend to pedal terror and its properganda in not just our great country.

Well worth a read....and will pull you up to speed to the current affairs of our Terror Cops.

I can't really make up my mind about this audiobook. The content is very interesting and that's the good stuff. I learned a fair bit about how our anti-terror security forces go about their work. That said, the writing style isn't very accomplished - a point accentuated by the narration. I also got a bit irritated by some of the ham-fisted attempts to weave in points throughout the story which rather spoiled it for me. I ended up feeling informed but not really entertained.

Perhaps one book to long

Liked his other books but think the author had ran out of events. So much padding out, and not much action. I suppose there is only so much a person can write about.

I felt this nook was written for the sake of writing. Having read Keeble's previous accounts of working on the child protection team and in the drug squad, I could see then he was wandering into the realms of portrayal himself as a self styled hero. I've never heard of a law enforcement officer refer to 'saving' people or 'rescuing' victims, so this just felt a little synthetic and a little too self assuring for my liking. The fact is Keeble does what many do day in and day out, and I'm disappointed he didn't speak in more broader terms of their accomplishments, instead he made it a little too much about himself.