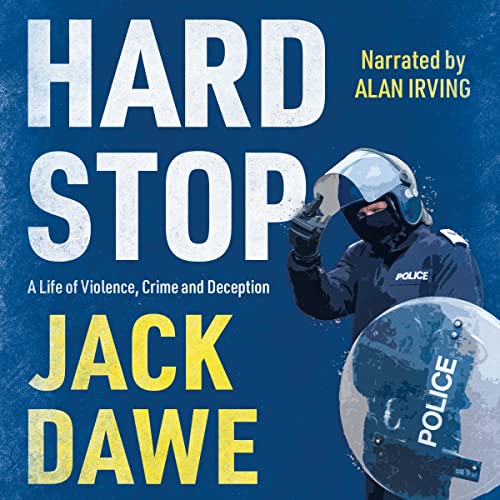 Jack Dawe is an unconventional street cop. His ability to not act or look like a "Copper" enabled him to infiltrate the drug networks of the UK. This no-holds-barred, explosive, and, at times, humorous account of undercover policing takes the listener through a journey of crime, violence, and deception. This memoir is a true story of poacher turned game keeper.

A veteran of 30 years’ service as a soldier and police officer, Jack reveals how he grew from a young thief into a soldier in search of danger and adventure across the world. This journey would see Jack have scrapes with the law and constantly fall foul of the strict codes of military discipline. Jack's thirst for adventure led him to a career in the police, where he took on the role of "street cop" and "Thief Taker" with tenacious vigor.

During the early 2000s, the UK was gripped in a war on drugs, Yardy gangs ruled the heroin and crack trade that was destroying communities across Britain, and the constant threat of firearms and punishment beatings held communities locked in fear. Organized crime groups ran illegal raves and flooded the streets with cocaine and ecstasy pills, which were often sold to children. This illegal trade was spreading misery and addiction across the country. Jack's skills and willingness to take risks resulted in him be being recruited as an undercover police officer. This exciting role took Jack across the country, as he took on some of the most dangerous drug gangs in the UK.

What listeners say about Hard Stop

I use audible for when I’m driving around for work, usually just in the background not really paying too much attention.

This was completely different - I throughly enjoyed this audiobook and was absolutely gripped from the start (to the extent where I could probably recite all the key parts).

I will recommend this book to my friends & recommended that anybody ready this gives it a go - you won’t be disappointed!

enjoyed throughout and kept me engaged. Sadly the terrible Welsh accents were cringeworthy bad though and out of place in Penarth.

Great honest account and it left me wanting more, so many bit of my own career I can relate too

This man's story was gripping from start to finish. The cops get a hard time publicly nowadays, they're damned if they do, damned if they don't. This story reveals the graft, dedication & personal sacrifices that the police go through on a daily basis.
The highlights of the book for me was when Jack was facing down the barrel of a gun, the AWOL chapter & going deep undercover to bring down known drug dealers....
Excellent. I truly hope Jack Dawe releases another tell all book.👍

A great read or listen.

A very entertaining book about the realities of modern Policing. A story of the true determination of the unsung, unseen individuals who try to make our world a better place for little or no recognition or reward. Highly Recommended for those that know!

Thank you for sharing this part of your life.
Parts of the book swept me back to when I served in Woofers and brought back those years that went on to make me who I am today.
Its also a story of mates who through thick and thin have your back and not scared to be counted.
I hope one that me being a Pioneer can put a sentence together 🤣 oh to dream
I enjoyed the book and wait the next one

What a fantastic story, with so many twists and turns, the narrator really captures the mood throughout! If you're interested in the Army, or the police, then this book is for you. The author really does give you a true insight into undercover policing, and what it's like to be a British Soldier.

I finally got the time to start (and finish) Hard Stop on Audible, and didn’t want to stop! This is a great story for anyone looking for adventure, intrigue, crime stories, and the maturing of a man through life and the war on drugs.
This UK story is easy to follow and understand even across “the pond”, I’m glad I found this book!