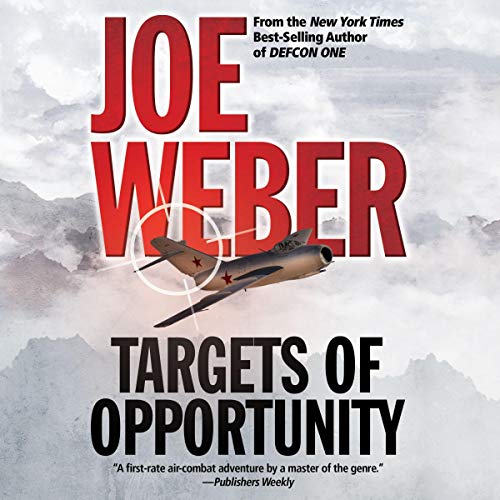 "A first-rate air-combat adventure by a master of the genre." (Publishers Weekly)

Joe Weber follows up his best-selling novel Rules of Engagement with another high-stakes thriller about a secret war and the courage of the men who fought it.

The Vietnam War is at its height, and the US has acquired a Soviet-built MiG-17. Marine aviator Brad Austin has been recruited to test-pilot it. The MiG is an aerial hotrod, crude yet lethally effective. But it's not what Austin is flying, it's where - behind enemy lines, disguised as a Russian pilot. If he succeeds in penetrating the enemy air space, he will find easy prey. But if he fails, he will be disavowed.

With edge-of-your-seat tension and gripping realism, Targets of Opportunity is thriller writing at its best!

"Some writers get better with age: Weber is among them. This novel will have great appeal for technothriller and military-fiction buffs, especially for those who love aviation." (Library Journal)

"Thanks be to the book-writing gods; we have a writer who does what writers are supposed to do - tell a story." (The Wichita Eagle)

What listeners say about Targets of Opportunity

I initially hated the narrator change because I listened to Rules of Engagement just prior to this book. The character voices are obviously different, but I got over that & was absorbed into the story! Well written with plenty of action ( I am an action junkie). But this book!

non stop action. I really enjoyed this book. it's the kind you can't put down.

Performance was off putting

I spent 10 yrs in Marine Corps aviation and I have never heard anyone talk like these characters. If he would’ve just read the story and his regular voice it would’ve been 1000 times better.
First of all, he made it sound like all these fighter pilots are old men. Naval aviators an NFO’s are usually in their mid-to late 20s to early 30s in their prime. And then it was comical because at one point I thought I was listening to Dirty Harry, then Mr. Magoo. And then it sounded like Krusty the clown and the rest of the cast of The Simpsons mixed in with a little bit of The Jetsons and Bewitched.
And then his mispronunciation of a few very important words like Cubi Point and the USS Oriskany, not to mention Point Magu in California.
Absolutely horrible performance. The story isn’t half bad but I almost quit listening to it due to the performance.
The only problem I had with the book is, like I mentioned, I spent 10 years in Marine Corps aviation and Brad Austin was a pretty big whiner. You would never see that in today’s naval aviator.