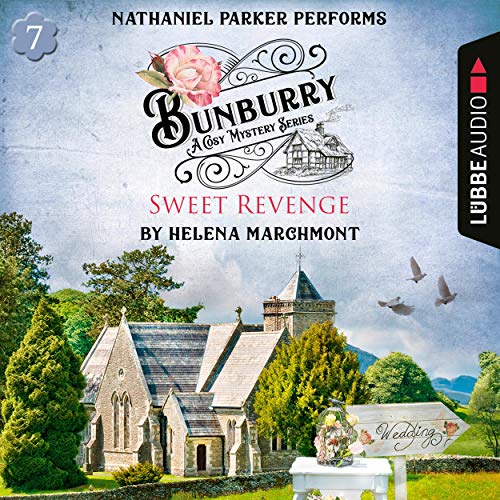 By: Helena Marchmont
Narrated by: Nathaniel Parker
Try for £0.00

Miss Marple meets Oscar Wilde in this new series of cosy mysteries set in the picturesque Cotswolds village of Bunburry.

In Sweet Revenge, the seventh Bunburry book, Alfie is back in London, trying to pick up his old life there. But even a wild social whirl with his best friend Oscar can't disguise the fact that he misses Bunburry. And then a cry for help reaches him - Liz and Marge are in trouble, and Alfie races back. But as he and Police Constable Emma Hollis join forces to clear the ladies' names, he has to confront a growing suspicion. Has Liz made a mistake while making her celebrated fudge, or have the ladies been up to something more sinister?

Nathaniel Parker, born in 1962, graduated from the London Academy of Music and Dramatic Art and went on to join the Royal Shakespeare Company. His television career began in 1988 when he played Flying Officer 'Flash' Gordon in the LWT mini-series Piece of Cake. He is also the lead in the BBC series The Inspector Lynley Mysteries, based on the novels by Elizabeth George. Nathaniel Parker has an extensive list of audio books to his credit, ranging from the classics of Charles Dickens and Thomas Hardy to more modern writings and children's books.

What listeners say about Sweet Revenge

Alfie is back in Bunbury investigating another mystery which threatens Liz and Marge’s fudge making business.
The story is excellent, as always. Thankfully, the irritating Betty has not returned and there is the possibility of romance with Emma. I hope so in the coming two other stories.
A word of advice if you have Audible membership and use credits- these are shortish stories and it’s better value to buy with a card. That is something I stupidly took a while to realise!

I was very glad when I found out the last book wasn’t the final book in the series, because I didn’t like the ending.

As always the story is well-written, and the performance is excellent.

Hurray! Bunburry is back!

I was afraid that the Bunburry series was never going to return, and that the excellent Nathaniel Parker was condemned to waste his talents reading the feeble Mydworth Mysteries. Unlike Mydworth and the stodgy Cherringham, Bunburry is inhabited by people who are vivid, quirky, sometimes outrageous and often funny. But there is also a serious side to the story-line, in which many of the villagers are trying to help - sometimes unobtrusively, sometimes clumsily - the central character gradually come to terms with unpleasant events which happened before the story starts.....
And as a bonus there is the hero's friend, a latter-day Oscar Wilde, witty, kind and rich (richer than the real Oscar ever managed to be).

Village stories with a detective story built in. Now on number 8!
Brilliant narration by Nathaniel Parker.

Another Great Story from Audible

I am absolutely loving the Bunberry mysteries. Sounds great on audible, with great narration from Nathaniel Parker. Can't wait to hear book 8

I am really looking forward to number eight. This series' is very enjoyable. Every night I look forward to the next edition

I couldn’t possibly love this series more than I do. Well, that’s a lie. I’d love them more if they were longer. Such great stories, and clean as well. I hope Ms. Marchmont (don’t know if that is correct or not) will someday make them longer. And Nathaniel Parker does such a wonderful job at narration! You will love these books I’m sure. You will surely fall in love with the characters.

A visit to Bunburry always a delight...

This cozy series is dependable, soothing, comforting.. with well drawn characters and a neatly drawn
and resolved murder...the narrator, Nathaniel Parker is a terrific conduit for this series.

Thank goodness it is back.

The joy I felt in seeing this series back no words can say. The book didn’t disappoint at all. Super fabulous. If this is your first time reading the series. Lucky you, as you have the others in the series to catch up on. So excited to see 2 more coming out. They have been preordered!!!!

These are more about the people than the mysteries, but it’s always fun to see how they play out, even if they get wrapped up quickly. Love Nathaniel Parker as an actor and a narrator. However, his whispering in this series has been tricky to navigate with constant volume adjustments and rewinds. In this one there are several segments worse than usual, especially when Marge and Liz are talking together. Marge is too loud, Liz is too soft. So up/down, up/down, repeat.

I really enjoy these Bunburry Mystery episodes. They are easy to listen to, and engaging in a light-hearted way. The plot is interesting, even though not very intricate. I listen to them at bedtime; they help me to shed the day's tensions and become restful.

Loved it! What a lovely cozy. Aunts are delightful and marvelously entertaining! Emma is on a roll.

Very light listening. Possibly the best narration of any book I've heard, except for the American accent!

Excellent writing and character profiles. Hard to turn off. Will continue to listen to entire series. Superb narration