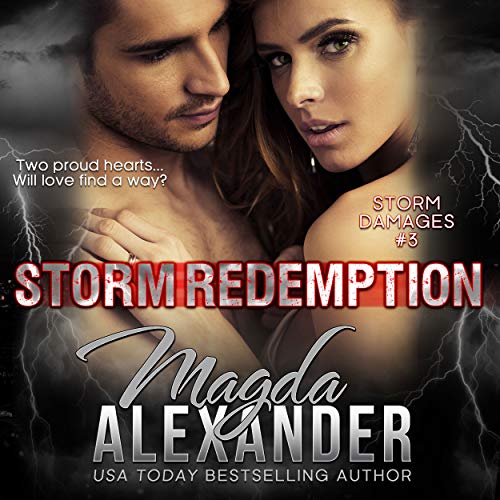 By: Magda Alexander
Narrated by: Anthony LeRoy Lovato
Try for £0.00

Elizabeth's rocky marriage to the volatile Gabriel Storm suffers a mortal blow when she walks out on him. But her love for her son and her husband draws her back. While fighting for a marriage on the rocks, she struggles to make him understand her need for a career. But it's her unruly heart she fears most of all, for it craves his every touch, his intoxicating taste, his hard, pounding body. Will she stay and give up on her dream or walk away one last time?

Gabriel will do anything to save his marriage to the captivating Elizabeth. But when she goes to work with a hated rival, his proud heart won't accept her need for a career. And when a threat surfaces once more, he must carve a delicate path between protecting her and giving Elizabeth the freedom she craves. But it's only when he confronts his own demons that he discovers what's truly keeping them apart. Will he change in time or lose her forever?

What listeners say about Storm Redemption

Absolutely loved it!!!! By far the best one yet. This can't be the end though!! Way too many unanswered questions that need to be answered!

All I could ask for in an audiobook...

What did you love best about Storm Redemption?

Despite being a caricature-sounding novel, this audiobook is an honest effort, beautifully done. The novel is well-written, a book about two broken people who don't know how to love each other but do so anyway. Using free United Kingdom based sound effects, this novel is skillfully added to and made into a novel with a little bit of romance, a little bit of suspense, with all of the wonderful qualities that I could ask for in a modern Maltese Falcon-esque interpretation story.

Which character – as performed by Anthony LeRoy Lovato – was your favorite?

I loved his passion and genuine effort of getting into each character's point of view. I laughed because, in truth, he doesn't do a very believable woman's voice, but still, his woman were full of honest feelings. Even though his accents are very imperfect, they are a piece of honest artwork, and I loved them. I feel that this narrator made every effort that I could ask for to read these novels well.

I believe in audiobooks as a performance art. It is more important to me that a novel's rendering is honest than that it is perfectly realistic. As a series, I would definitely choose to continue to read this set of books, and listen to the audiobooks, moving on to Jake and Brianna's story. This is a real complement, because, for me personally, I usually can't stand/don't have the attention span to listen to more than one set of character's stories per narrator. For example, I loved the novel, "Grim," and then the novel, "Ynyr" by author M. K. Eidem. I didn't enjoy the in-between novels (that were made into audiobooks, "Oryon" and "Wray",) as much because the same narrators that did "Grim" did them as well, and those novels' characters' point of views were too much of a stretch for that original set of narrators, in my opinion (as well, those novels didn't present new ideas, just regurgitated existing ones). The two novels that were done between "Ynyr" and "Grim" sounded like "Grim" repeated, to me. Thanks for the giving me the opportunity to say what I think!

Narrator not as good this time.

This series is wonderful and the narrator is usually on point. But this time, his voices were not as distinctive and he sounded like he had a cold. Plus the volume in the recording fluctuated in the middle of dialogue which was annoying. Maybe this recording was rushed because it was not as good a quality as the last two books.

So glad I'm done with this series

This series started off good but by the end of this book, I am just glad it is over. Too much contrived drama and the heroine is on my last nerve.