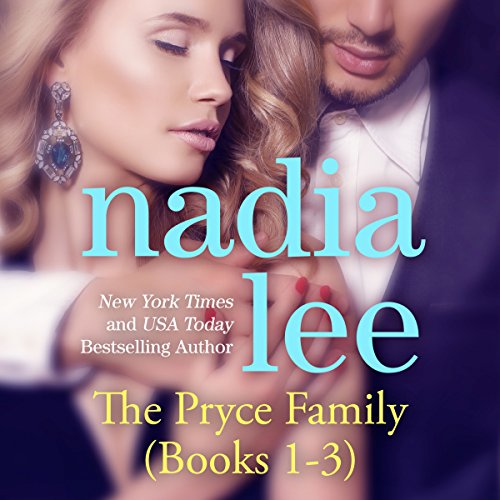 By: Nadia Lee
Narrated by: Kirsten Leigh
Try for £0.00

Curvaceous beauty Hilary Rosenberg doesn't believe in love. She only goes out with nice guys who won't expect passionate romance - until a notorious womanizer demands she repay a favor with four weeks of counterfeit dates.

Billionaire playboy Mark Pryce doesn't do relationships. In fact, he's never been with the same woman for more than three months. But when his matchmaking mother tries to sabotage his bachelorhood, he needs a stand-in girlfriend to deflect her. Luckily, Hilary owes him. But as they start to spend more time together, he finds himself wanting to break his first rule: never get too close.

Deep in debt and stalked by a deadly con man, Jane Connolly needs a job and a safe place to stay. With no one to turn to in an unfamiliar city, she can't refuse the kindness of a magnetic stranger.

A former mixed martial arts fighter, billionaire Iain Pryce couldn't walk away from a small town girl in a big city, especially when it's obvious she's in trouble. But her sweet spirit threatens the single principle he's been living under for the past 13 years: don't lose control.

Having grown up in a dysfunctional family, Vanessa Pryce knows the futility of relying on a man for happiness. But there is one man who makes her want to ignore the truth: the irresistible Justin Sterling, her no-strings boyfriend since their college days together. Even after they break up, she continues to meet him for passionate encounters while keeping the relationship secret. No need to make public something that's doomed.

Billionaire tycoon Justin Sterling understands Vanessa's fears. But he's about to change the game they've been playing, because when one drunken night of sex leads to pregnancy, he's going to move heaven and earth to rewrite their rules.

What listeners say about The Pryce Family, Books 1 - 3

Happily Ever After Stories!

Would you listen to The Pryce Family, Books 1 - 3 again? Why?

Yes, I love to listen to stories, without too much drama!!

Book 1 - Mark, for not giving up!
Book 2 - Jane, sharing her love for family, no matter what, how mad we are with our own.
Book 3 - Justin, knows how to handle situation.

What does Kirsten Leigh bring to the story that you wouldn’t experience if you just read the book?

Kirsten, did a good job in telling all three stories. But, it would have been much better if we had a male voice (Zachary Webber).

Not really, it should have been separate books. The reason why, if I wanted to go back to listen Book 2, I would have find the chapter number where to start.

There is perhaps 1-2 “hot” moments per story, so if that’s what you’re looking for you might want to move on. I finished the whole 3-story collection but I probably won’t go looking for any more in the series. Nothing terrible, but nothing stands out.

Great listen, can wait for next in series.

Enjoy all the characters. Great story great narrators. Those parents are a piece of work the messed those children up. Goes to show need more than money in life.

Didn’t finish the series. Books one and two were enough for me.

Both stories I listened to were well written but fairly similar to others I’d heard, so nothing new here.

This is one part of a series that I absolutely fell in love with! I hated that I didn’t have more of them to read. I can’t wait for the next one!

Not so much at first but got better

On book 1, I expected to have a good cool book, but instead I was annoyed and bored. I started the series with Kim's story and Hillary seemed stronger. The sample sounded exciting, but nope. Over the top overtures of love was absolutely too much.
Let's see if I make it to book 2.

On to book 2, better, much better. I enjoyed the story of Jane and Iain although the reality of most of the events happening is really unlikely. By the way, why weren't the cops called first. Jane's attitude during 90% of the story was down to earth and enjoyable. My complaint in this book is the jump in narration of internal thought and actual speaking was not very distinctive. More clarity in the distinction would have made it more interesting in my opinion.

Okay, book 3. It's sad that this love story continued on for 10+ years. I see the cared and dedication Justin had for Vanessa, but what about her thoughts and feelings. Anyway, I enjoyed Vanessa in book 1 and 2. In this book, she carries a lot of baggage from her childhood and her parents. Nice twist on the parental side. I could have done without the "thank you" meet up - frankly it was strange.

This is a great selection of stories about some of the Pryce offspring.. and the toxic relationship their parents have which cause them all to have emotional baggage that stops them from opening their hearts to love.. that is until ‘the one’ comes into two brother’s lives.. and their sister’s 10 year booty call suddenly has to get serious.

Worth a credit? Yes.. three different perspectives on living a life with their dysfunctional cheating parents - which leave high barriers and emotionally scars.. but thankfully they all end in sweet happy ever after fairytales. And I’m really looking forward to hearing about the remaining two brothers finding their true loves... hint hint Audible ;)

My only issue is that there are three other books in this series that I have to purchase on Kindle.

I enjoyed all 3 books. The characters were well developed; the conflict was a little tame, but still held my interest. I’m sorry to see the next 2 books aren’t available on audio. I’d like to listen to Dane get his comeuppance!