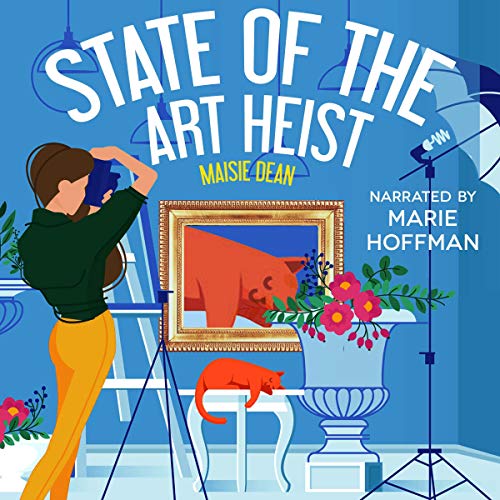 State of the Art Heist

By: Maisie Dean
Narrated by: Marie Hoffman
Try for £0.00

Kacey Chance is an aspiring actress with a cute face and a plucky attitude. She's trying to break into Hollywood, but it isn't easy. She was the prettiest girl in her hometown, but in LA she's a dime a dozen.

When a friend offers Kacey a job working at a detective agency, the young actress jumps at the opportunity. Maybe this is the role she's been looking for.

The detective agency is unlike any she's ever seen in the movies. It's run by three handsome, single brothers and their sassy grandmother. Her first day at the agency is anything but boring. She's put on the case right away, infiltrating the world of LA's rich elites. Soon Kacey is finding clues for her new bosses, and having the time of her life.

The case involves a piece of artwork that was stolen during a big Hollywood party. There's strong evidence it was taken by the host's ex-wife, seeking revenge. But a visit to the suspect's posh LA penthouse only reveals more suspects with more motives. There's the colorful artist who created the masterpiece, jealous film executives, and more ex-wives. Even the catering company is acting suspiciously.

Kacey is deep into the investigation when she discovers her employers are in trouble. The financial kind. If this case goes wrong, and they lose their biggest client, the Booker Brothers Detective Agency could be shutting down for good.

It's up to Kacey to solve the mystery of the State of the Art Heist, save the agency, and keep her new job, which really is the role of a lifetime.

There are plenty of laughs and tons of twists in this feel-good cozy mystery from debut author Maisie Dean!

Content: No graphic violence, sex, or swearing. This clean, easy listen is perfect for lunch breaks or relaxing at the end of the day!

What listeners say about State of the Art Heist

A fun and zippy mystery with quirky characters and a good case to solve.
I listened to this book in one sitting and I thoroughly enjoyed it. Kacey is a really lively character and uses her acting skills to great advantage to get the job done. Plenty of humour and drama to keep me listening. I'm looking forward to the next book in the series.

This was my first cozy mystery and I have to say I enjoyed it. I found the main character endearing and funny. The narrator was fantastic too. I liked the story and will be reading the next book.

State of the Art Heist (Brooker Brothers Detective Agency #1) was a great read by Maisie Dean. Kacey Chance is trying to find her big break in Hollywood as an actress. A friend offers Kacey a job working at a detective agency and she jumps at the chance. She didn’t expect the agency to be run by three handsome and single brothers with their grandmother. Her first case brings her to the world of LA’s rich elites. I enjoyed reading Kacey’s journey trying to find out who stole a piece of artwork from a Hollywood party. I can’t wait to read more by Maisie Dean.

State of the Art Heist

Kasey has changed careers. Instead of being an aspiring actress she’s now an aspiring detective. She is starting out with the Booker Brothers Detective Agency. On her first day there she meets Tippy, the grandmother to the boys. A new case walks in and Kasey is thrown feet first into a crazy case with three very different in style detective brothers.
An entertaining story that leaves you wanting more!
Marie Hoffman is a fantastic narrator who breathes life into each character especially Kelsey’s!

I received this book for free. I am voluntarily posting this review and all opinions expressed herein are my own.

It's an enjoyable fun cozy series. The characters have good humor and the commentary by Kacey, the MC, is often good for a chuckle. Each character is quirky in their own way - which made the story more interesting. The mystery had enough twists to keep you guessing.

The narrator, Marie Hoffman, does a nice job.

Received a bonus code for an honest review. I thoroughly enjoyed all the books in the series that I have listened to.

Even better in audio!

Great characters and a new fun plot make this a great getaway! Come for the fun and stay for the plot full of twists! The publisher's blurb is pretty good but not as good as Indonesian shrimp chips!
Now I've got the audio and Marie Hoffman is every bit as perky as Kacey!

New Girl on the Job

Kacey's acting career isn't progressing as she hopes so she takes a job working as a temp in a detective agency run by the Booker Brothers. The promises to be interesting and easy on the eyes, and when the landlord arrives on her first day to hire the brothers to figure out who stole his very valuable painting, the case drops Kacey right in the middle of the suspense and intrigue

Maisie Dean's cozy mystery story is told with a good deal of humor, a genuine talent for painting larger than life characters with quirks and characteristics I quickly came to love and an ability to conjure scenes and situations that will keep you anxiously following the tale from beginning to end.

If you like light-hearted "who done it" stories with a bit of single girl romance and characters who are larger than life, you will love this one. I sure did.

This is a quick frothy read. I didn't guess until the end who done it. Most books similar to this one I know a few pages in, so it was nice trying to figure it out. I recommend this book.

This is a new to me series, and I absolutely loved it! All of the characters are a ton of fun, and by the end of the book I felt connected to them. All 3 of the brothers have a unique personality & Kasey is peppy, curious & inquisitive. Together they each play off of one another so well with banter and humor that made this book an easy listen in one sitting. The side characters in the story helped the pace of the mystery move along in an interesting way, while red herrings did a great job of misdirection. All in all I am a big fan, and I can’t wait to see what happens next!