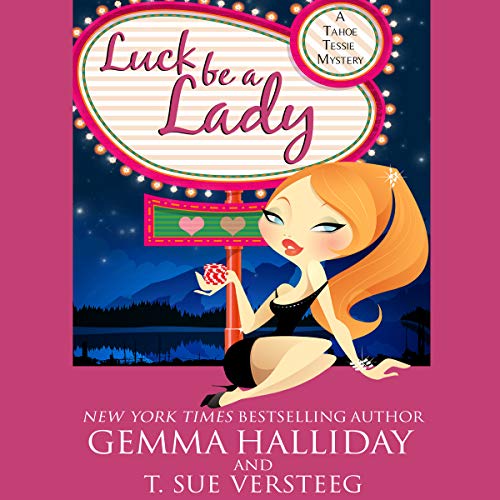 Luck Be a Lady

Tessie King has just inherited the biggest casino in South Lake Tahoe, Nevada: the Royal Lakeside. What she didn't bargain for are the problems she'd inherit with it.

Having left Tahoe years ago, the underbelly of the casino trade is a far cry from the art world Tessie is used to. High-stakes cons, inside jobs, wise guys... Tessie quickly realizes she's in way over her head. And things go from bad to worse when questions start to arise about the nature of her father's death. Enter FBI agent Devin Ryder, member of the Nevada Organized Crime Task Force. He's had his eye on the Royal Palace for months, and with the suspicious death of its leader, Ryder now has Tessie squarely in his sights. If Tessie doesn't want to be running her casino from behind bars, she needs to find out how her father really died, who's behind it, why, and how to get them into Agent Ryder's hot little hands before he gets his hands on her. All the while catching a con-man, beating the competition, and running a multi-million dollar business.

Tough job? Fo'get about it. All in a day's work for this lady luck.

What listeners say about Luck Be a Lady

I loved this story. Tessie goes back to her late father's casino. While she tries to find out who might have wanted her father dead, she learns a lot about who she can trust. She also learns a lot about herself in the process. And.... A little something about not judging books or bimbos on their outward appearance.

This was a perfect first audible book. Fun!

This book was full of mystery, romance and fun. I thoroughly enjoyed it. I'm ready for #2

Murder in a casino

In Luck Be a Lady by Gemma Halliday and T. Sue Versteeg, Tessie King is attending the funeral of her father, the chairman of a major Lake Tahoe casino, when she finds out that he has left everything to her, and she now actually owns a very large majority share of the casino, which she doesn’t want. She must remain in Tahoe at least until they can call a new board meeting in ten days and elect a new chair to replace her. She gets involved in the case of some thefts that can only have been committed by staff. Then, she learns that he has been under investigation by the FBI for mob ties and that they suspect his death was not natural.

Clearly not welcomed by the security staff of the casino, Tessie sets off to do her own sleuthing, which takes her throughout the casino, to a men’s stripping event, and to the ski slopes. She teams up with her step-mother, Britain, whom she comes to know as a real individual and not just the gold digger Tessie’s mother assumes her to be. She also gets support from her gay local best friend, Tate, who takes her to the beefcake event. On the other hand, she does not get along with Alfie, the head of security, who keeps telling her just to go to the spa instead of poking het noise into his business.

This book has its high points, such as the very satisfying conclusion. But there are other places that I didn’t enjoy. The character of Tate seemed to fit the stereotype of the effeminate gay man to such an extent that the character did not cone across as very believable. I will, however, point out how rare it is to find gay characters in cozy mysteries that the mere presence of any gay man is a nice addition to the book. I did get annoyed at the frequency of references to sexual imaginings of Tessie and things like the beefcake event.

The narrator, Lyssa Browne, does a strong performance of the audio narration of this book. A couple times I felt she got overly emotive, but those were the exceptions, not the rule. The character of Tate got overly dramatized at times in his gay persona, but I think that is a response more to the wiring style than to the narrator’s interpretation.

In general, I enjoyed Luck Be a Lady, but it is not among my favorites in my audio bookshelf. I think the series has potential to build on what this book has begun. So I’ll have to examine reviews of the next book to see if other readers feel it improved over this first book in the series. I give the book three stars.

It's a fun book to hear.

it was a fun quick listen. I will be moving on to book 2 soon!

Cute and entertaining read! Versteeg and Halliday pull you in with a snippy main character as usual, altho a bit ditzy seeming at times. The narrator was good but not great merely because of the odd voices she gave other characters, not the main character (main character/majority of the reading was great).

If you could sum up Luck Be a Lady in three words, what would they be?

Fast-paced, light-hearted. No major distractions if you enjoy audio books while you're driving as I do. Just an engaging, fun read.