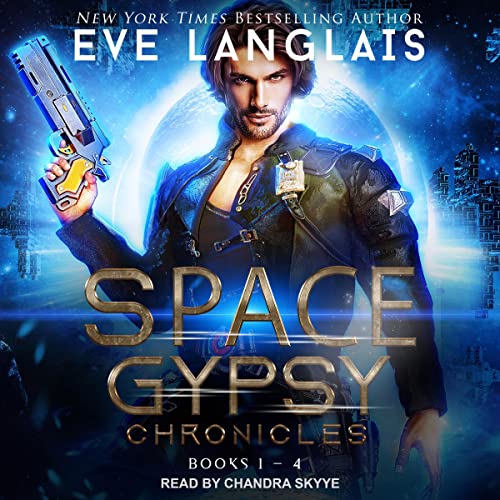 By: Eve Langlais
Narrated by: Chandra Skyye
Try for £0.00

Get ready to go on a twisted space adventure as destiny catches up with a reluctant hero.

Expect fast-paced action, aliens, and more aliens, planet hopping, a mysterious quest, and a bossy spaceship who likes to meddle. Includes all four books in the Space Gypsy Chronicles:

Pirate: Destiny might be calling, but he's not answering . . . yet.

Sinner: All he remembers is how to survive.

Rebel: Rafe never wanted to lead until he doesn't have a choice.

King: After centuries of roaming the universe, he's bringing his people home.

Will this be the start of a new life, or the end of everything they've ever known?

These books honestly left me feeling annoyed. I enjoyed Eve Langlais but this series has some big flaws. Now I'm a person who can appreciate that not all books have a HEA but the ending felt rushed. Spoiler: What is up with the ending??? The pirate and the ship end up together. I would have come up with something on how the twins merged into one body or killed off one. Also, why are all the bad guys so weak. They honestly do not seem to really present any challenge nor did they do anything really all that bad or evil to the main characters. These books had so much potential but ending up very lacking.