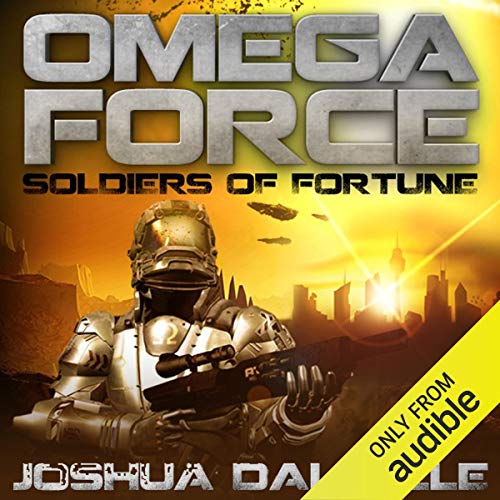 By: Joshua Dalzelle
Narrated by: Paul Heitsch
Try for £0.00

Omega Force is back!

After the daring rescue of a political dissident, Omega Force is contracted to investigate a rash of violent attacks on civilian shipping lanes within a group of star systems known as the Concordian Cluster. It seems a simple enough job with a huge payday at the end, and it's exactly what the ragtag group of mercenaries needs in order to keep their ship flying and to stay one step ahead of those hunting them.

However, the further they delve into the seedy underworld of the Cluster, the more they realize they may be in over their heads. With innocent lives hanging in the balance, Captain Burke and his crew begin a desperate race to uncover who is responsible for these attacks, and why, before their ultimate goal can be realized.

Soldiers of Fortune is the follow up to the popular novel Omega Rising and the second book in the Omega Force series. It continues the adventures of Jason Burke, a lone human in space who has linked up with five other aliens to try their luck as hired guns. Their mandate: to help those who don't have the means to help themselves and never accept a job that would compromise the honor code they live by.

What listeners say about Soldiers of Fortune

it's very sad to see what happened to me with the omega force series where no audio book is numbered for continuity and order of stories, the same thing here is listening to the expansion wars all three books just to realize that for the first time I should listen to black flet to better understand the story and to be continuity. you've lost a client who could have bought the black flet if I had not listened to the expansion wars first to know more than 50% of what's happening in black flet, it's a pity that such a good author is not in the mood to make a continuity in the titles and not miss a client.

Joshua dalzelle as done it again with another great story with the boys on top of all the trouble only they can get in too.

Thoroughly enjoyed the book, doesn’t disappoint great storyline and brilliantly narrated. Looking forward to reading the next in the series.

Good start to the series

Great, lovet it but a bit short. very easy to listen too. hope the rest of the series is as good

not the most thought provoking or imagination pushing story, but still a good listen. narrator is good

Look at who's writing is getting older and better!!

When I listened to Omega Rising last October I loved the book! It was a good concept with lotsa action and fully rounded characters and you could tell this was going to be a great series! One year later when Audible finally presented the next 6 in the series, we were proved right! Soldiers of Fortune seamlessly continues where Rising stopped And there's a little more sass and confidence in the characters each of which are a treasure in themselves. And the action, the mystery, the skull-
duggery, the humor, keep you interested from chapter one. Warning: I do not recommend this book to those listeners who are compelled to make the sandwich run, check their voice mail, use the facilities during the book. You'll miss something good.... Joshua and Paul keep doing what you're doing! You're going to join the Dynamic Duos of Sci Fi!

If only RC Bray could have narrated this....

This story is solid. I like the characters for the
most part, but the narration is average at best. He just doesn’t have enough good voices imo. If only RC Bray could have narrated this...and everything else for that matter!
Not sure I’ll continue in the series

Moves along lacking any motivating purpose

The writing is okay but the story lacks a sense of real purpose. The crew sees itself as a space-age Magnificent 6, without much backstory to illicit any interest toward any of them. A lone bunch of guys whose entire reason for living is to help save those who are being stepped on by others as they hop around the galaxy getting jobs from altruistic rich benefactors. Even the primary protagonist's history, of what little exists, is that he was a non-fighting ex-spec-ops guy who pines from the loss of an estranged blond girlfriend standing next to a Camaro.

The narrator has a decent dynamic range in articulating the different alien and female voices but his recital comes off rather mild and matter-of-factly.

I'll not be continuing this series.

Crusher and Lucky. We get to know them both a little more.

Have you listened to any of Paul Heitsch’s other performances before? How does this one compare?

Paul always brings me into the world. Great job Paul.

This story was a great second installment to the series. Just as engaging as the first. I'm off to the next. I think this series so far is freakin' awesome. Check it out.

This is the third Dalzelle book I've tried, and while I like the adventurous tenor of the books, I finally had to admit it was too frustrating to listen to the parts of the writing that are just dumb.

A human being in a completely alien civilization, and every species has the same human mannerisms. They all laugh like humans. They all shrug like humans. When they're unhappy, they all frown like humans. The only creativity displayed is in cosmetic differences, because every alien species our hero encounters is an oxygen breathing biped, just like humans.

Even stupid details like time are human-centric. This alien wants to meet with our hero... in exactly one hour. Who knew that 1/24th of the Earth's rotation is a galactic standard for measuring time? Weird.

Daizelle would do very well with an editor who would catch these tendencies and insist they be corrected on the 2nd draft.

I consider these books a waste of my credits... but since I bought three of them, it's my own fault. I'll ask for a refund on one, but the rest I have to take accountability.

This would've been a good book for a younger audience if it didn't use the f bomb. A bit corny and predictable and not much action for being on a gunship.

Would you try another book from Joshua Dalzelle and/or Paul Heitsch?

The endings are very formulaic and set up the next book.

Have you listened to any of Paul Heitsch’s other performances before? How does this one compare?

Yes. He is a good reader

These books are based on a nice premise but the author is writing really poor characters. The lead character has no redeeming qualities and consistently behaves like an idiot who never thinks about what he is doing. He is very sociopathic and there does not seem to be any reason the other characters or women are drawn to him or have any loyalty toward him. Unfortunately we the readers have to go through the process of the author justifying his actions when we the readers should have known exactly why and hopefully sympathize with the lead character.Jason is not a sympathetic character. It is not that the author is writing him that way and there is a deeper and brilliant reason behind a tortured character. Nope. Jason is just a reactionary idiot who does not seem to understand how badly he treats people. He is truly clueless and not in the endearing way but the "How did my sister marry such an asshole way".I have actually used these books as an example of how an author can create non sympathetic characters who drag down a books story. There is also the issue that the author seems to have a very primary school understanding of government and how it works. like so many neo conservatives he has created yet another dynamic of "Government is bad and all people in government are just trying to screw you and steal your freedom."It's really odd. I am not sure how old this author is but he seems to have a very immature understanding of how things work. He might be in his early twenties if I had to guess. His attitude is very much like many conservative twenty somethings. More like someone who had his ideology taught to him his whole life by a parent maybe instead of being someone who developed his only ideas about the world. Nothing wrong with being conservative but your ideas should be fully formed and they should be your conclusions not some one else's. ONLY read these if you want to use them as a guide to how a book can be screwed up. I love self publishing but sometimes there is a good reason a publisher does not take a manuscript.

One of the all around best thoroughly enjoyed it. Cant wait to see the movie

Guardians of the Galaxy mixed with Firefly

What did you love best about Soldiers of Fortune?

It is a very easy book to follow along with and very entertaining.

What other book might you compare Soldiers of Fortune to and why?

Guardians of the Galaxy and Firefly

loved this better than the first book.

well placed humor that mad me laugh out loud while in the middle of an action packed well written series.