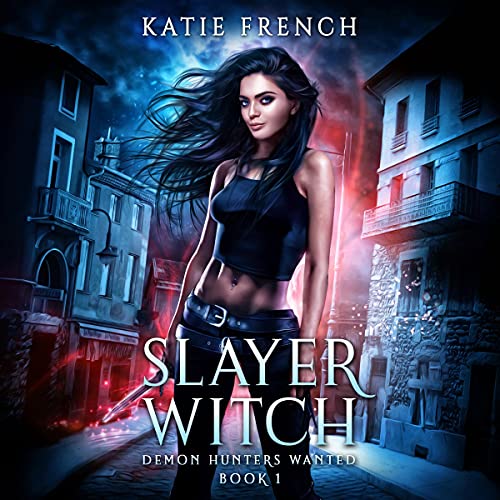 By: Katie French
Narrated by: Alyse Gibbs
Try for £0.00

Nothing like getting your a-- kicked by a demon on the way to the most important job interview of your life.

But, that’s where I find myself right before trying to make a good impression on the supernatural investigation agency of my dreams. If I get the job, I can slay demons legally, unlike the criminal slaying I’ve been doing.

The only problem? I have to lie through my teeth about who I am or they’ll never hire me.

But the good news is I’m great in a fight, even if I fight dirty. The even better news is there are lots of openings at the agency. Unfortunately, they were created by a murderous cartel known as the Viceroys who seem to be releasing the demons and using their powers to take out most of the agency’s staff. This gets me the job and moves me and the other wet-behind-the-ears interns right in harm’s way.

The other interns don’t think much of me, and the feeling’s mutual, especially in the case of Dax Murphy. He may look like a Hemsworth brother, but he’s arrogant as hell. Not my type. Really. I’ve got a lot to focus on with keeping my identity secret and not getting my head cut off by a Viceroy.

But maybe there’s more to Dax than eight-pack abs. And maybe secrets from the past don’t always stay buried.

What listeners say about Slayer Witch

I think the attempt was to be snarky but just came across as juvenile to me. I was obviously the wrong audience for this story and may be enjoyed by younger readers.

I really enjoyed this story. I am a fan of Buffy the Vampire Slayer so I appreciated the humor and snark the author was going for. I found the turns in the plot unpredictable. It kept me wanting to listen and on the edge of my seat.

Not deep, not great but pretty darned entertaining for a light read, I will watch for her again when I need a break.

I Looooooooooooved this book. The main girl is so cool and her whole story is so kicks ass! Great listen and the narrator did a great job keeping me engaged in all the action!!!