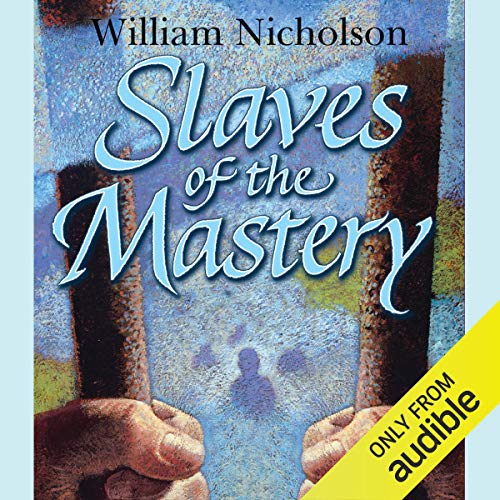 Slaves of the Mastery

By: William Nicholson
Narrated by: Samuel West
Try for £0.00

Five years have passed. The city of Aramanth has become kinder - weaker. When the ruthless soldiers of the Mastery strike, the city is burned, and the Manth people are taken into slavery. Kestrel Hath is left behind, separated from her beloved brother, Bowman, and vowing revenge. Now Kestrel must find Bowman again, and Bowman must learn the secrets of the Singer people. Only then will they break the power of the Mastery.

Here is the second book in the magical Wind on Fire trilogy from best-selling author William Nicholson.

What listeners say about Slaves of the Mastery

I've read this book many times, never gets old.

I love the Wind on Fire trilogy, but this book is my favourite. This is not the first time I have listened to this book and it won't be the last.

a fantastical, beautiful, brutal and heartbreaking book skillfully read. can't wait to listen to the next.

This trilogy has been brilliantly read and is a favourite book of mine from my childhood.

Frothy light story, well read, ideal listen if you don’t want to concentrate too much. Listened whilst I was unwell and fell asleep but was easy to go back and pick up the story line Samuel West was a good narrator.

A lovely reading of the book, I thoroughly enjoyed it and was captivated. The story itself is one I read when I was younger, I think the trilogy is very well written.

Slaves of the Mastery is less of the middle book in a trilogy and more of the beginning of a new series. Story still follows the characters we met in The Wind Singer, but new ones are added and the overall plot line is radically different. Different, but amazing. It's a trully excellent story told in a unique and compelling voice, and the narrator brings it to life. I highly recommend this book and this series!

One of my absolute favourites.

Just a really great story performed by an amazing orator. Captivating and fanciful, but not cheesily so.

A Unique and Exciting Adventure

I read and listened to quite a few fantasy YA novels in June, and while fantasy and YA aren't usually in my comfort zone, ended up enjoying all of them. This particular trilogy only came to my attention because I've fallen in love with Samuel West's voice and narration style, and so have bought most of the audiobooks he's recorded that are likely to be of interest to me (16 of them so far). Twin sister and brother Kestrel and Bowman Hath are living peacefully in their now egalitarian society after having endured a totalitarian regime most of their lives (this is covered in book 1 of the Wind of Fire Trilogy). However this state of affairs doesn't last long when an ambitious young soldier decides to capture the entire town as slaves for the people of the Mastery. The methods used to keep captured slaves compliant are incredibly cruel, so the people have no choice but to let themselves be led to their new masters. While the raid takes place, Kestrel and Bowman are separated, with the boy and other family members taken in captivity while Kestrel is left behind to make her way to safety. Along the road, she meets a young and extremely beautiful princess travelling in great pomp who takes her under her wing. The twins each use their great intelligence and special skills to get their family back together again while also doing all they can to overthrow the oppressive regime, with the girls also having to fend off the advances of dangerously enamoured men. And exciting adventure story which is rather unique, as was the first book. Both are highly recommended.