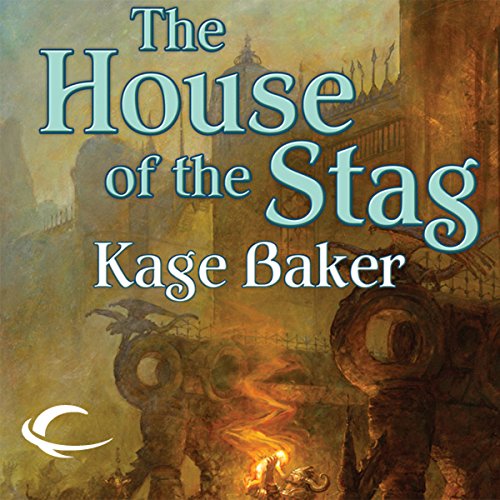 The House of the Stag

By: Kage Baker
Narrated by: Sean Crisden
Try for £0.00

Before the Riders came to their remote valley, the Yendri led a tranquil, pastoral life. When the Riders conquered and enslaved them, only a few escaped to the forests. Rebellion wasn't the Yendri way; they hid, or passively resisted, taking consolation in the prophecies of their spiritual leader. Only one possessed the necessary rage to fight back: Gard the foundling, half-demon, who began a one-man guerrilla war against the Riders. His struggle ended in the loss of the family he loved, and condemnation from his own people. Exiled, he was taken as a slave by powerful mages ruling an underground kingdom. Bitterer and wiser, he found more subtle ways to earn his freedom. This is the story of his rise to power, his vengeance, his unlikely redemption and his maturation into a loving father - as well as a lord and commander of demon armies.

Kage Baker, author of the popular and witty fantasy The Anvil of the World, returns to that magical world for another story of love, adventure, and a fair bit of ironic humor.

What listeners say about The House of the Stag

I don't pick up one of Kage Baker's books or stories because I think the plot sounds interesting. I pick it up because it was written by Kage Baker. There is much more to her work than the "plot" -- she knows how to tell a story. What I like best about Baker's stories is her creative world-building and her sense of humor. Her stories are unique, peculiar, smart, and often very funny in that dry deadpan way that I love. Her style is similar to Jack Vance's, though without the elaborate use of language that is part of his humor.

Despite some serious subject matter (slavery, racism, colonialism) and plenty of darkness, violence and gore, The House of the Stag is delightfully humorous. On his way to becoming The Dark Lord, Gard becomes a gladiator, a gardener, and an actor. He collects fashion and personality advice as he goes, keeping his thoughts mostly to himself and often limiting his speech to epigrammatic replies of "Yes," "Oh," and "Thank you." (Somehow, this is very funny.) Along the way, he meets many colorful characters such as the werewolf butler who collects celadon porcelain dishes and the female theater groupies who wait outside the Dark Lord's dressing room. Baker never overdoes these bits of humor -- their subtlety is what makes them so funny.

Too little of Kage Baker's work has been produced on audio, so when I saw that Audible Frontiers had recently released The House of the Stag, I snatched it up. It's read by Sean Crisden, whose voices are perfect for Baker's dry humor. He's absolutely hilarious in the scene where the theater manager is explaining the stock characters of epics to Gard.

This is a wonderful book, full of redemption, silly ostentation, appearances vs reality and a tendency to reach for the best out of the worst. Love it! Delighted to find it on audible,.

I love Kage Baker and her series following Mendoza. But, I tried for an hour to listen to this, and I just can't listen to this narrator. Stiff, awkward, poor changes in tone and voice. I will get it as a "regular" book. It may or may not be a great book, but right now I can't tell. And worse, I had saved this for a very long car trip, and had to listen to science podcasts instead!

Just found the Audible edition and 're-read' the book. What a brilliant story of a hero that becomes the villain so that he can really be the hero for his people! Baker's writing is hysterically funny, thought-provoking, poignant, and breath-stopping--often at the same time.

Her world building is brilliant: she creates races and people and governments and laws that breathe and are organic. Her imagination is boundless, and her worlds have that feeling too, but we also get the minute emotional reactions of her protagonist, as well as the other people with whom he interacts.