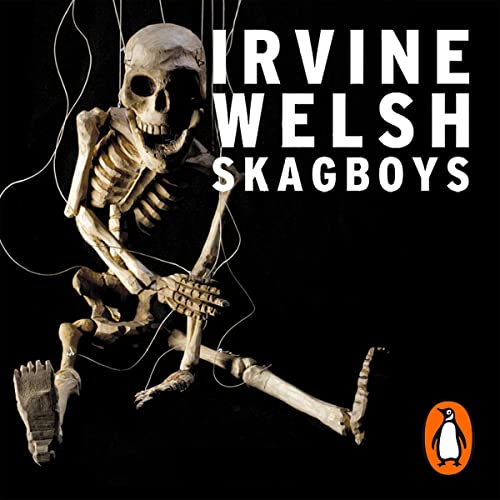 Mark Renton has it all: He's good-looking, young, with a pretty girlfriend and a place at university. But there's no room for him in the 1980s.Thatcher's government is destroying working-class communities across Britain, and the post-war certainties of full employment, educational opportunity and a welfare state are gone. When his family starts to fracture, Mark's life swings out of control and he succumbs to the defeatism which has taken hold in Edinburgh's grimmer areas.

The way out is heroin. It's no better for his friends. Spud Murphy is laid off from his job, Tommy Lawrence feels himself being sucked into a life of petty crime and violence - the worlds of the thieving Matty Connell and psychotic Franco Begbie. Only Sick Boy, the supreme manipulator of the opposite sex, seems to ride the current, scamming and hustling his way through it all. Skagboys charts their journey from likely lads to young men addicted to the heroin which has flooded their disintegrating community.

This is the 1980s: a time of drugs, poverty, AIDS, violence, political strife, and hatred - but a lot of laughs, and maybe just a little love; a decade that changed Britain for ever. The prequel to the world-renowned Trainspotting, this is an exhilarating and moving book, full of the scabrous humour, salty vernacular and appalling behaviour that has made Irvine Welsh a household name.

What listeners say about Skagboys

This will almost certainly be the sweariest book that you will have ever read. In fact, it is one swear-word short of sweariness saturation- where the context of the story is lost in a sea of foul potty-mouthiness.

HOWEVER... It is written with a deftness of style, and a sensitivity to the human condition, which can bring you to the point of tears. The characters develop seamlessly into rich, interesting, believable, three-dimensional, but larger, no, LARGER than life people. You love them, you hate them, you feel for them, you hope for them, you cringe with them. The tale (or tales) is (or are) in turns funny and sad and poignant, and funny, and cringeworthy, and did I mention funny. And as for the swearing- it feels so natural to the characters that you barely even notice it.

The book has a feel similar to its companion, Trainspotting. It is more a series of little episodes, which build like a mosaic into the whole of the novel. I think that it's better than Trainspotting- it's just so well written!

The Narration is as good as any I have ever heard. Tam Dean Burn obviously loved his brief, and he nailed it! It is told with a passion and energy, which brings that characters and scenes alive. I'm sure that Irvine Welsh was delighted by the rendition that TDB delivered.

I cannot rate this book highly enough. It really captured me from the very first moment, and I urge you to give it a go!!!

Stick with it - It grows on you

I started off hating this. The swearing was unreal. Given that I swear a fair old bit this shocked me a bit.
I did stick with it and am so glad i did. Learnt to really get close to the characters and understand them. There was enough humour to keep you sane.
I would read/listen to it again. Just don't let the first hour put you off

Grew up in a rough area? You'll love this!

Where does Skagboys rank among all the audiobooks you’ve listened to so far?

Really enjoyed it...would be in my top five audio books.

What other book might you compare Skagboys to, and why?

Trainspotting, which this is the prequel to.

There are so many, it's hard to single one out...there is a very funny sex scene and you'll know which one when you get to it.

This is definitely not one for the kids. It is proper adult humour and subject matter. If you are easily offended, do not get this book as you will definitely not like it. It is crude, very sweary and politically incorrect in its best places, never mind its worst. If, like me, you grew up on a rough old council estate and did a few dodgy things when you were young, you will absolutely love it and find you can relate to the lifestyle and the characters in the book with a rather perverse nostalgia.I thought it was wonderfully entertaining, totally hilarious in places and thoroughly enjoyable...so much so, I immediately started listening to Trainspotting as my next book.I would say that the reading of the book is without doubt, the best reading I've ever heard. The narrator is truly brilliant and perfectly captures the essence of the characters with the amazing accents and colloquialisms off pat. Genius level narration, in my opinion.

It had me hooked.

Just like the main issues in the book itself, I found myself hooked. Each character bringing me deeper into their own world finding it more and more difficult to break away and ever eager to find out where the story goes. The marvelous voices from Tam Dean Burn padding out the characters that Irvine Welsh put to paper emphasised each unique character traits and quirks.

Would you listen to Skagboys again? Why?

It would be easy to say the obvious favourites but there flaws are all higlighted many times, i went through stages of loving and hating Renton. Keasbo i wanted and still do want to know more about, he was easily the most likeable and probably the "gadge" you could associate with most despite his failings.

I also wanted to learn a touch more about seeker, i really enjoyed his relathionship with Mark in rehab.

Sick boy for all the wrong reasons is a pleasure to listen too.

Have you listened to any of Tam Dean Burn’s other performances? How does this one compare?

Yes, he makes the incredible charachters of Irvine Welsh come to life in your head. The voices are all recognisable instantly, Tam Dean Burn should be narrating every audio book as a matter of law.

This was the best to date simply because of the 24 hour duration, it never sounded tired and by the end i didnt want to leave there world regardless of the sordid aspects of their existence.

No, the length didnt allow and truthfully it takes a bit of thought and recap.

A wonderfully written book, I love a prequel like this where at the start it just seems like a new story and by the final page the jigsaw is so much more complete in your head. The problem is you get greedy for more of the same. I have read this book too, the audio is just a bit special.

My favourite Irvine Welsh book apart from trainspotting . A great listen , do not hesitate .

love these characters wish there was more.
Always wanted to return to book as soon as I'd put it down.
Story got a bit lost sometimes but I suppose life is like that as well

Belter of a start to the journey of Renton

Great,narrator was Scottish which was a bonus,overall a great start to Renton's story, highly recommended for all Trainspotter fans.

Irvine Welsh is a genius

Captures the imagination from the start.

Excellent book with real guts and a naked honesty through out.

Excellent but not for the faint hearted

The sequel to Trainspotting lives up to Irvine Welsh's original. Lots of laughs and familiar characters in a believable story about how they became schemie junkies. Being Scottish and born at the same time as the main characters took me back to how Thatcher screwed a generation and British scociety and wasted lives, helped greatly by the people themselves.

If youre not Scottish you may find some of the story hard to understand - heaps of dialect. If you don't like very strong language (repeated often) and some gross/taboo stories - avoid. Having read/listened to all of Welsh's books to date this is up there with the original and Glue.

The best credit I have ever spent here and I have listened to some beauties - I had a barry time listening.

Welsh Fans Will Love It

Would you consider the audio edition of Skagboys to be better than the print version?

I actually would not, I enjoyed the listen, but as a Canadian not used to Scottish accents or slang, I think I missed a lot as compared to the other Welsh books I've read. I'll be giving this one a second listen to try and pick up what I missed.

What was one of the most memorable moments of Skagboys?

The moments where they are all just destroyed and miserable with withdrawl were unreal. So pathetic and desperate, the narration brought that all to life.
Everything with Maria was so awful but memorable.

Who was the most memorable character of Skagboys and why?

Maria really sticks out in my memory, Her story is really heartbreaking.