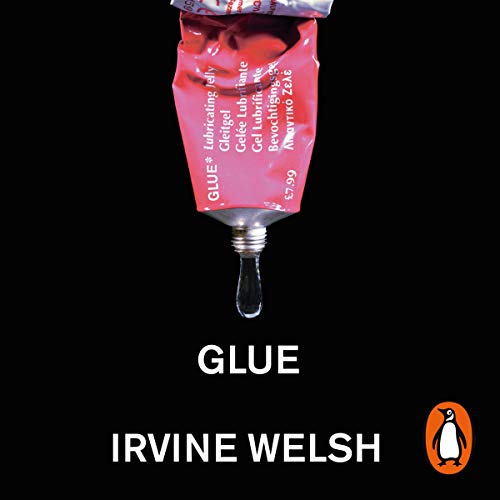 Glue is the story of four boys growing up in the Edinburgh schemes, and about the loyalties, the experiences, and the secrets that hold them together into their 30s. Four boys becoming men: Juice Terry, the work-shy fanny-merchant, with corkscrew curls and sticky fingers; Billy the boxer, driven, controlled, playing to his strengths; Carl, the Milky Bar Kid, drifting along to his own soundtrack; and the doomed Gally, who has one less skin than everyone else and seems to find catastrophe at every corner.

As we follow their lives from the '70s into the new century, from punk to techno, from speed to Es, we can see each of them trying to struggle out from under the weight of the conditioning of class and culture, peer pressure, and their parents' hopes that maybe their sons will do better than they did. What binds the four of them is the friendship formed by the scheme, their school, and their ambition to escape from both; their loyalty fused in street morality: back up your mates, don't hit women and, most importantly, never grass, on anyone.

Despite its scale and ambition, Glue has all Irvine Welsh's usual pace and vigour, crackling dialogue, scabrous set-pieces and black, black humour, but it is also a grown-up book about growing up, about the way we live our lives, and what happens to us when things become unstuck.

"Full of incident, mad, crackling dialogue, attractively appalling characters, and some of the funniest and rudest sex scenes." ( Sunday Times)

What listeners say about Glue

Not the best quality. Large parts of the book are missing.
Chapters don't match the book and skips a bit every 40 or so mins.
Gutted that it's not up to audible normal quality.

Good but not full book length

Always enjoy Irvine Welsh's stuff, but was a bit put off by the fact this has been considerably chopped down from the actual length of the book, and therefore some parts that we're vital to the plot we're cut out and non necessary one's weren't.

Fantastically read but the sound levels and quality are dire. Worth a listen if you’re an Irvine Welsh fan.

Disappointing revisit to an old fave

Read this years ago, so thought I'd revisit it as I'd forgotten some of the story. Remembered particularly enjoying the Munich festival part of the book though. Very disappointed to find it was cut from the audio. I'm wondering what else was cut now as well. Production quality was, as Welsh would it, 'pish'. Plenty of background hiss on most, but not all chapters. That said, Tam Burn was, as ever, an excellent narrator.

What would have made Glue better?

While I accept certain words, sentences and paragraphs are skipped, there are whole chapters missing. If you want to hear a quick summary of the book then download it, but if you want the full story I recommend you buy or borrow the book. It took me a lot longer to read than 5 and half hours! Great narration though.

What was most disappointing about Irvine Welsh’s story?

Nothing, it's a great book, it's the fact that it wasn't the full story and it's obviously been edited.

What character would you cut from Glue?

Love Irvine Welshes books loves Tam Dean Burn reading them. But the audio quality and editing of this poor and there are chapters missing.

Do not purchase this!!

Missing so many great chapters of the book. That other reviewers have alluded to its a cobbled together abridged version. So many great parts of the book my favourite by the author. Disappointing listen to rushed the book is excellent in setting up the bond of the four characters. But this is bollocks poor Gally barely gets a mention.

Missing most of the book

Not only does the story make no sense, with jumps around the recording, it also ruins a brilliant book.

It’s a massive book (578) pages and this just takes sections of it at random (not abridged, just a dodgy file).

Abridged - as in hacked to pieces

Tam Dean Burn talks too fast, has the wrong cadence and only occasionally captures the voices of the protagonists. This version has been abridged and misses a lot of the key scenes. Shame.

Avoid this and read the book - it's so much better

A big sprawling epic of a book. Well wrote. Well read. By far my favorite Welsh title. Juice Terry is the man!