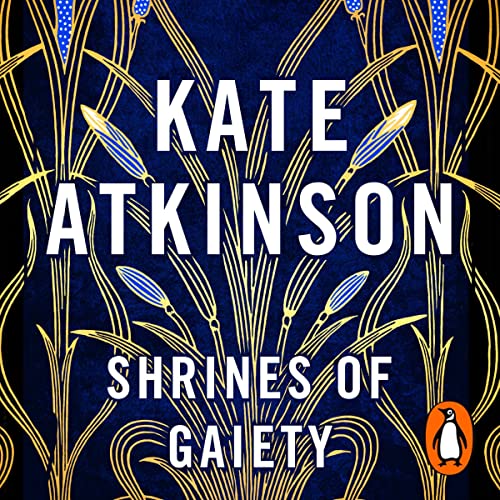 By: Kate Atkinson
Narrated by: Jason Watkins
Try for £0.00

1926, and in a country still recovering from the Great War, London has become the focus for a delirious new nightlife. In the clubs of Soho, peers of the realm rub shoulders with starlets, foreign dignitaries with gangsters and girls sell dances for a shilling a time.

The notorious queen of this glittering world is Nellie Coker, ruthless but also ambitious to advance her six children, including the enigmatic eldest, Niven whose character has been forged in the crucible of the Somme. But success breeds enemies and Nellie's empire faces threats from without and within. For beneath the dazzle of Soho's gaiety, there is a dark underbelly, a world in which it is all too easy to become lost.

With her unique Dickensian flair, Kate Atkinson brings together a glittering cast of characters in a truly mesmeric novel that captures the uncertainty and mutability of life; of a world in which nothing is quite as it seems.

"This is the perfect novel for uncertain times."(The Times)

"I can think of few writers other than Dickens who can match it." (Sunday Times)

What listeners say about Shrines of Gaiety

Loved every listening minute, Kate Atkinson at her very best. I will return to “Shrines of Gaiety” in the future, but I envy You who will listen for the very first time.
Absolutely Wonderful! ❤️.

The Great Kate does it again, and here with a truly excellent narrator. Happy listening!

Oh how I love Kate Atkinson books, always very droll and a bit quirky. The first few chapters are a tad confusing, but then it gets into its stride. As with most of her books the mother Nellie is not in the least maternal, also we have detective Frobisher, shades of a 1920’s Jackson Brodie ( just my opinion ) the book has the usual mix of droll humour and underlying sensitivity. Interesting 1920’s period setting and the author explains more at the end.

Having started this after reading the many excellent reviews I was disappointed and gave up on it after a few chapters. Boring, unnecessary detail and no storyline developing. No depth of characters evolving.
A lack of expression in the rather dull and sing song narration.
Not one of Kate Atkinsons best novels, not helped by poor narration.

This story transported me to another time and place. Jason Watkins is the perfect narrator.

such a good story and a great narrator. the period in which it is set is one of my favourites and each character is a winner!

I cared about all the characters

I really enjoyed this book because the characters are so well drawn. Nothing jarred and their motivations and actions flowed well. I googled roaring 20s to see what the clubs looked like. It seems to me that not much has changed in a century

As always, a wonderful, immersive and surprising book from Kate Atkins, beautifully read by Jason Watkins. Intriguing story, unforgettable characters and a glimpse into a forgotten world.

Kate Atkinson is by far the finest British author working today. Despite this masquerading as a ‘crime’ novel, it’s actually a comedy of manners, an intimate portrait of mental health and loneliness, and a fascinating study of sexism & class war in the 1920s. The writing is, as usual, superb, the characterisation is spot-on and the story rolls along like the Thames - which lurks in and out of the tale like an extra protagonist. I loved it!

This amazing looping intricate story was a joy. And the narration was fantastic. I was sad when it ended.

Great writing and perfect narration.
Excellent - definitely a great read.
Cant wait for her next book

Ever since her debut, Kate Atkinson has been one of my favourite authors. This is as good as the masterpiece, Behind-the-scenes at the Museum.
I hope you enjoy it as much as I did. It is a most engaging and moving piece of work.
Gwendolyn Kelling is a wonderful creation as is Nelly Coker.

Kate Atkinson has once again written a masterpiece . I was transported to the streets of London in the roaring twenties . She brings her character alive and I was obsessed with this book . Beautifully read as well . Now the wait for another Kate Atkinson .