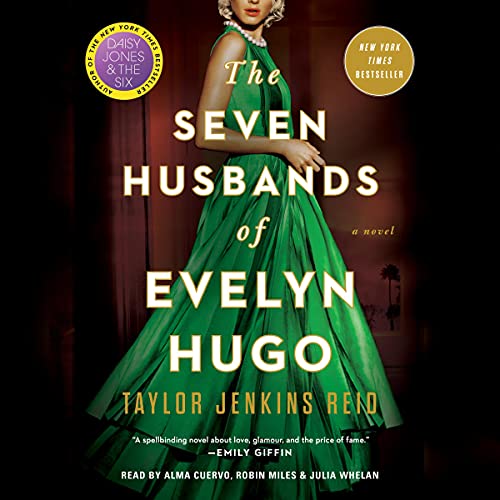 Soon to be a Netflix film

From the author of Daisy Jones & The Six in which a legendary film actress reflects on her relentless rise to the top and the risks she took, the loves she lost and the long-held secrets the public could never imagine.

Aging and reclusive Hollywood movie icon Evelyn Hugo is finally ready to tell the truth about her glamorous and scandalous life. But when she chooses unknown magazine reporter Monique Grant for the job, no one is more astounded than Monique herself. Why her? Why now?

Monique is not exactly on top of the world. Her husband has left her, and her professional life is going nowhere. Regardless of why Evelyn has selected her to write her biography, Monique is determined to use this opportunity to jumpstart her career.

Summoned to Evelyn’s luxurious apartment, Monique listens in fascination as the actress tells her story. From making her way to Los Angeles in the 1950s to her decision to leave show business in the ‘80s, and, of course, the seven husbands along the way, Evelyn unspools a tale of ruthless ambition, unexpected friendship and a great forbidden love. Monique begins to feel a very real connection to the legendary star, but as Evelyn’s story near its conclusion, it becomes clear that her life intersects with Monique’s own in tragic and irreversible ways.

The Seven Husbands of Evelyn Hugo is a mesmerizing journey through the splendour of old Hollywood into the harsh realities of the present day as two women struggle with what it means and what it costs to face the truth.

"This wildly addictive journey of a reclusive Hollywood starlet and her tumultuous Tinseltown journey comes with unexpected twists and the most satisfying of drama." (PopSugar)

What listeners say about Seven Husbands of Evelyn Hugo

The concept of this story is original and intriguing and once started , I knew I wanted to finish it .It started to fall down as the amount of times Evelyn
Hugo married increased, not because of the number of them , but because of the reasons behind them ! I think when reading a good work of fiction, one can suspend disbelief and be swept away by the story. This became impossible for me half way through. Nevertheless, it’s a good romp , ideal holiday reading , and worth a listen .

I listened till the end…all I can say. The narrator reads worse than some of my 15 year old students. Started average and soon became very repetitive and boring. Would not recommend 😴

Fun plot about an actress's juicy love life, but no depth, nuance or layers to the novel.

I really loved this book. It is beautifully read. it really gets going towards the end and made me cry

My daughter recommended this book as a sensation making people cry everywhere! I didn’t shed a tear. It’s ok maybe better if read rather than listened to but it is not satisfying , it’s just a plot rather clumsily written , no depth or nuance a moneymaker for sure but ultimately a throwaway lengthy fictional article about an actress . The narration was just about ok .

Immerses you in a different time, amazing plot, had likable but flawed characters and handles serious and sensitive topics in a careful way that doesn't feel preachy.

(And unlike many American narrators the voice didn't get on my nerves! )

I loved the narrative in this novel; the different perspectives and Evelyn’s storytelling. I think the performances really added to the characterisation and I was captivated. Highly recommended.

A beautifully written story with captivating narration.
This story had me hooked from the start. If you are on the fence about this one, don't be it was worth the credit.

I thoroughly enjoyed it so so much from the story line, the whole build up to it and the way it ended. Gosh! Feels like it has been ages since I invested this much on a book! The narrator was simply perfect. Like the cherry on the top!

Monique is a pointless addition to this book. The voice actress has the most bizarre inflections in her voice which do not match the text, making everything sound like a question. This adds to how pathetic the character is, complaining constantly and just being insecure the entire time. Her chapters are very hard to listen to and are really emphasised by how well the voice acting for Evelyn goes. Evelyn’s story is okay, but Monique ruins the book and makes it not worth the read as Evelyn isn’t interesting enough on her own

The narration was out of this world
The story rich with life stories and authenticity.
What a treat!

Not my favorite book but not my worst either. It was beautiful in its own way and definitely original.

I was sold from Page 1! The story, the plot, everything was remarkably good!

Buy it, read/ listend to it!

Wonderful narration, but the story was superficial and boring. Evelyn Hugo is a strong character but the one marriage after another was repetitive and predictable. Huge disappointment.

I'm sorry but I have to say it......2 hrs left and I've been forcing myself last hour. Predictable, sloooow and uninteresting characters.

Such a good book! The writing is so raw and real in showing us all her nuances and layers that by the end you really feel like you know Evelyn personally. The love she felt concerning the people she cared for was so pure and complex, getting to read about it was really a bliss. 100% would recommend

I loved this book the first time I read it and I fell in love with the story again hearing it. However, and I don’t know if it’s there in other versions, there’s this humming noise in the background that I found slightly annoying and distracting.

I also felt uncomfortable when the narrator cried but it’s probably just me. Otherwise, this is a great story, I highly recommend it.

Intriguing to the end

Beautifully written, heartfelt and while I could kind of see the end coming I still enjoyed the story and all the characters.

Absolute delight from start to finish.

I loved it. The best work of fiction I've encountered in a few years!