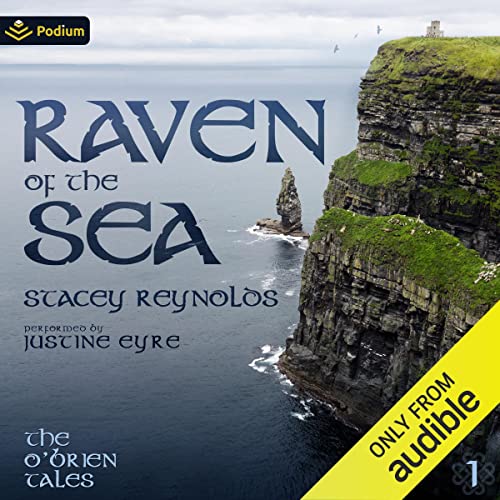 Raven of the Sea

By: Stacey Reynolds
Narrated by: Justine Eyre
Try for £0.00

Against the backdrop of windswept, coastal Ireland, two people are brought together under unlikely circumstances, one scarred by tragedy, the other by betrayal.

Branna O’Mara never expected to be orphaned at the age of 23. When she lost her father, Major Brian O’Mara, USMC in the Second Battle of Fallujah, she thought she’d taken the worst life had to give. She never imagined she would lose her mother to cancer six years later.

The life of a military child prepared her for the challenges of relocating, but for the first time, she’d be doing it alone. Where do you go when you’re the last man standing? The solution came to her when she received an email with a real estate listing in County Clare, Ireland. Having inherited her parents’ rental properties, she knew the value of a diamond in the rough. A secluded cottage in the land of her ancestors was just the fresh start she needed. What she wasn’t prepared for was another buyer, after the deal had been struck. As she becomes intertwined with the people, the music, and the spirit of the small town, she understands that she’s finally found somewhere to belong. Michael O’Brien and the entire O’Brien clan are a force to be reckoned with, but she will not allow them to take her new home.

Michael O’Brien is a local hero and rescue swimmer for the Irish Coast Guard. He has lived in the small coastal village of Doolin, in County Clare, all of his life. Emerging from the ashes of a failed marriage, and living with his parents, is not where he expected to be at the age of 29. All he really wants is to buy the local Kelly cottage, fix it up, and live in peace. After two years on the market, he never imagined there would be a competing bidder. He certainly didn’t expect some little yank to swoop in to town and try to buy it right out from under him. He finds himself drawn into an unlikely battle with a fiery, young American woman, neither of them willing to bend. But as her secrets unravel and the woman is revealed, will he be able to push her out of the cottage, the town, and out of his life?

Recommended for mature listeners due to some explicit language and adult sexual content.

What listeners say about Raven of the Sea

loved this book, twists and turns in the story. passion, brought me to tears at times.

This is a great book very nice I enjoyed it a lot.Lookimg forward for the ne t book

predictable, all was told in the first chapters. I don't know what made me listen to the end.

Such a weak story line, terrible narration, quite possibly the worst audio book I've ever had the displeasure of reading

If you love anything Irish you will love this tale. Of course I will admit the sex is a bit much. However, the family, the sessions in Doolin at the pubs was so so wonderful. I wanted to be there as I had been in Doolin long ago. The narrator was so so good! One of the best I have heard. She had every character and every accent perfect! If you can deal with some of the love scenes, you will enjoy the story.

Reader tries but the cookie cuutter characters, lack of authentic details and owerall ludicrousness made this book one of just a hanfull among the 600 plus in my library that I couldn’t bear to continue wasting my time on
Can only imagine this appealing to a very young person with no experience of the world or good writing

Terrific audio of a terrific book

I’ve read the book and now listened to the audio version.

Well done! Justine did a great job capturing the characters, dialect, and passion of the story.

Already preordered the next one. Keep them coming.

I am an avid audible listener and rarely give a full review. After studying abroad in Ireland - listening to this beautiful love story made my heart fall in love with the Emerald Isle all over again. I really appreciated the storyline as well as how the author incorporated traditional Irish folklore and history. Especially, she touched on a more modern view of the effects of 9/11’s impact on areas across the pond - how that event changed the controversial “troubles” b/w N. & S. Ireland. I would’ve never comprehended until I actually went on a black taxi ride in Belfast. As I am currently a Protestant scotch-Irish girl married into a irish(ish) catholic family - I really appreciated the author’s perspective (and lack of judgement) into such an amazing culture full of history, folklore, and mystical insight. Overall, it was a bit slower paced that many of the latest steamy enemy to lovers romances but well worth the listen! Can’t wait to dive into the next in this series.

I looooved this book, of course only the first book is free, thats where they get you sadly.

Great recommendation for the Soul!

This was recommended by my Audible rep. This book made me laugh, cry, and forgive my own personal faults. I love this book!

Fabulous listen! looking forward to next one in the series. Hope you enjoy it.

Loved this 1st book of the series!!!

Positively delightful story of two strangers forced to share a small two-bedroom cottage for 90 days. The depth of the cast of characters and their backstory’s bring a full range of emotions and relationships that will blossom into subsequent books. There’s enough heat between the two leads that remains tasteful without being overwhelmed or grossed out. Five stars across the board for me and I’m buying the next three books I’m so excited to read what happens to the next O’Brien Bachelor!!!!!

Just So-So (for free.) Immature writing - everyone is perfect

If you like reading about a perfect, idealized world - with utterly perfect people and overwrought prose, then this one is for you.
It’s long. I think the author created her Irish Utopia — with its matching, adopted family — and then simply refused to leave it in a timely manner.
The heroine is not only fabulously gorgeous, but has a perfect body (and a perfect, small ass, of which the hero repeatedly tells us,) and she is also somehow perfectly humble. Of course she sings like an Angel - a non-surprise which you can see coming a mile away. She’s a virgin with nary an orgasm in her past, yet turns immediately into a delicious sexpot. She’s perfectly clueless about her own fabulously-delightful self, and is also self-sacrificing to the point of idiocy.
I started to hate her. I was with Bad Fiona on this one… until the perfect heroine “converted” Bad Fiona with her perfect Mother Teresa saintliness.
The prose is repetitive and overwrought: “bursts” of laughter, “ear to ear” grins, “wracking” sobs - probably repeated 25 times each. Sex “all night long.” Every emotional reaction is plus one.
Everyone is hugged and kissed ALL the time. Within days of meeting her, everyone adores the heroine - she is told repeatedly how fabulous and loved she is. Over and over. Ad nauseam.
Synopsis: We love you, Branna ! Everyone loves you, Branna! All of humanity loves you Branna!! Branna, you are loved!

Another piece of young writing that annoys me: the hero and heroine constantly use their proper names when talking to each other. Who does that? If I looked at my husband and said, “Jim! I love you” he would look around to see if there were cameras rolling in the room. It’s staged. Stop it.

In addition, the issue of PTSD gets raised, and then dropped. No one gets treatment. The PTSD symptoms somehow disappear from the end of the story - an ending which goes on and on about every other perfect thing in their life. Who knew perfection cures PTSD?
Just find a hot, rugged, smart, single, Irish Adonis with his amazing, loving, warm, talented, funny, fabulous, accepting family.
That’s all you have to do for PTSD. Simple. Just somehow stumble your perfect self into the Irish version of the vonTrapp family (except hotter and kinder) and there you go.

I am amazed at how unlikeable the author managed to make the main character despite her backstory of loss. I slogged through the entire story hoping for growth, but it never happened. She simply stayed a self-centered terrible person throughout the entire book (although be prepared to be told over and over again what a good person she is). Yes, she occasionally did nice things for other characters in the book, but these all came about magically due to her extreme financial privilege (although she is described as being not well off despite having a massive real estate portfolio along with other avenues of easy funding.) Be prepared for nauseating characterization of a woman-child and patronizing father figure style relationship. Everything from infantile words that are more fitting for a child than a grown woman (e.g. “mommy” “daddy”, “tummy”, “belly”, etc.), to the way every secondary character in the book seems to do nothing else other than constantly monitor the main character’s moods and actions for any sign of unhappiness, leading to the impression that she is so childlike she is unable to care for herself. While it may be a nice fantasy to be taken care of, this dynamic was so extreme it seemed creepy and controlling. There also is a strong anti-abortion viewpoint, which is consistent with the main character’s background, but could be potentially hurtful to some readers. Finally, please don’t believe any of the information in this book about safe sex practices, gynecological care, or mental health (much of the info the main character’s quote is dangerously incorrect). On the plus side, there are some pretty hot scenes, and the author does have a talent for describing detailed inner monologues.