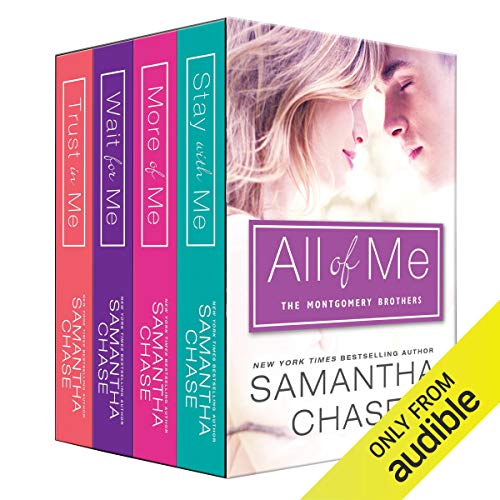 By: Samantha Chase
Narrated by: Kevin T. Collins
Try for £0.00

All of Me is a collection of four great stories from New York Times and USA Today best-selling author Samantha Chase. It brings all your favorite Montgomery Brothers books together in one set!

Wait for Me: Ex-NFL player Lucas Montgomery has seemingly lost it all and is trying to be content with his solitary life. But when sweet Emma crashes into his life - literally - he suddenly finds that solitude is the last thing that he wants.

Trust in Me: Jason Montgomery is doing his best to dodge all of the women who are suddenly interested in becoming the next Mrs. Montgomery. When he is paired up with his new assistant, Maggie, the last thing expects is to be the one pursuing. For months he's been the one being pursued, and even though the obstacles between them seem too great to overcome, Jason discovers that he's ready to claim the next Mrs. Montgomery.

Stay with Me: Mackenzie Montgomery has some issues with control. As the oldest son, he feels that it's his job to keep everything in his life running smoothly. At least until Gina Micelli returns. Gina's back in town to deal with her own family issues, but her lifelong crush on Mac is something that she seemingly can't outgrow. Mac's fighting to keep control of his life while Gina's doing her best to learn to take control over her own, but when they're together, control is the last thing on either of their minds!

More of Me: (bonus novella) Ryder Montgomery has returned to North Carolina to take a break from the corporate world, and the first item on his agenda is to look up the woman he walked away from more than ten years ago. Casey is currently going to be playing a big role in the Montgomery family's lives, and when paired up with Ryder, it doesn't take long for old sparks to reignite!

What listeners say about All of Me

Would you ever listen to anything by Samantha Chase again?

The narrator tried hard, but possibly too hard and there was no fluidity in his reading. It didn't work for me. The voice became annoying.

If you could play editor, what scene or scenes would you have cut from All of Me?

I would not have chosen such weak story lines to record.

What was most disappointing about Samantha Chase’s story?

lack of depth and feeling , everything was rushed.

What character would you cut from All of Me?

I couldn’t take it. Not even at 1.5 speed. Preview this one before you click that download button.

15 minutes in and I’m deleting this book!

I just can’t with the narrator. It sounded like it would’ve been a cute story but the performance is awful. Kevin T Collins has a nice voice but his narration is so in intense all the time and he rushes threw the book. It was making me anxious.
Maybe it’s a director issue. Kevin, calm the F down!

Why did I listen to this?

I just can't listen to any more of this nonsense. The basic pattern of each book is that the guy and girl are stuck together for some arbitrary reason. They want each other, tell themselves they can't, then decide they can, then something happens to make them fight, and finally they make up. All of the books follow this pattern. The word choices are uninspired and repeat themselves. I think most of the adjectives revolve around food, for example devouring each other, feasting, and etc. There's always a part about the girl who had been eating healthy digging into some junk food throughout the book. How are the guys so chiseled when they're workaholics, but there's no mention of going to the gym or working out, except for the first book. Lastly, why can't a kiss, just be a kiss? Why does it always lead immediately to sex?

This is the worst narration!!

I don’t write reviews but I am writing this to prevent anyone else from even contemplating purchasing anything read by this narrator. I love Samantha Chase stories but this narration is PAINFUL!

I really enjoyed the 4 stories in this box set and listened to all but it felt and sounded like the narrator was screaming.

Just could not get past narrator's voice.

Difficult to listen to. Narrator's tone and dramatic pronunciations ruined the story for me. Coukf not finish books.

The narrator was so over dramatic and somehow both shout-y and breathy at the same time. I just couldn’t finish the first book because of it. The story seemed interesting so maybe I’ll read the written version instead.

Have you listened to any of Kevin T. Collins’s other performances before? How does this one compare?

I enjoyed all these stories. The boxed sets are nice, because you really get your credits worth. Unlike books that go on for 19 hrs or more and seen to never end, these are separate books, with one story leading in to another.

I really wish I could find this in book form. The story got my attention and I think I could really enjoy it, but the narration was so bad I couldn’t finish it. He was trying too hard to “act out” the story that it sounded forced and slow.