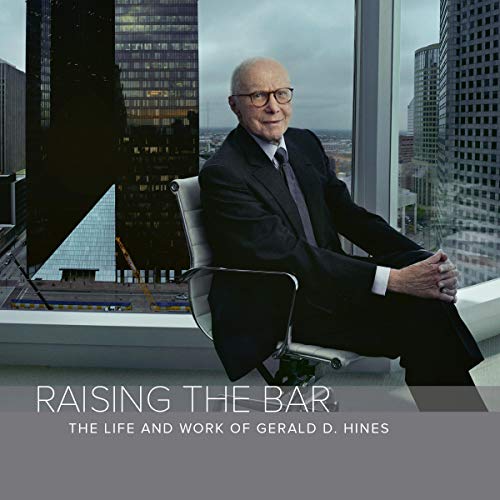 By: Mark Seal
Narrated by: Jonathan Smallwood
Try for £0.00

Gerald D. Hines stands at the top of the international real estate investment and development world. A Purdue graduate with a degree in engineering, Hines may have arrived in Houston in 1948 for a nine-to-five job at a heating and air conditioning company, but before long he was making the deals that would transform Houston’s skyline. Later, with his revolutionary idea that great architecture was good business, he was reshaping the skylines of the world. Today, Hines is a respected global organization with a presence in 20 countries that has developed, redeveloped or acquired more than 1,100 properties.

Raising the Bar: The Life and Work of Gerald D. Hines tracks one man’s incredible rise, from building small office/warehouses to manifesting Houston icons like The Galleria, One Shell Plaza, and Pennzoil Place to cultivating the national and then global expansion of his company. It paints the portrait of a man who himself is a study in contradictions: a child of the Depression and a citizen of the world; an engineer who still carries the slide rule that has guided his career yet commissions daring feats of art and architecture; a reserved and humble man in a field known for being brash and aggressive who takes on physical challenges with wild abandon. With enlivening anecdotes and revealing characterizations, Raising the Bar reveals the man behind the premier real estate company in the world like never before.

The world’s premier commercial real estate company began more than a half century ago with the vision of one man: Gerald D. Hines. A slide rule-wielding engineer by trade and mild-mannered Midwesterner by temperament, Hines defied expectations by making his mark on oil-boom Houston in a field notorious for boldness and bluster. But bold Hines has proven to be, taking calculated risks and building a respected global empire.

Raising the Bar: The Life and Work of Gerald D. Hines tells the story of Hines’ achievements in business and in life, providing rich detail for anyone interested in understanding the stories behind the world’s skylines.

What listeners say about Raising the Bar

This amazing book about an incredible man is not only an interesting read. If you’re interested in becoming a developer, as I am, this book is full of inspiration, anecdotes, and a road map to unimaginable success. Mr. Hines exemplifies the American dream and offers a role model for a life well lived with purpose and integrity. I found a new hero in this book!

Amazing person, developer, adventurist and philanthropist. It is great learning about different investment philosophies. Great book for entrepreneurs and re developers.