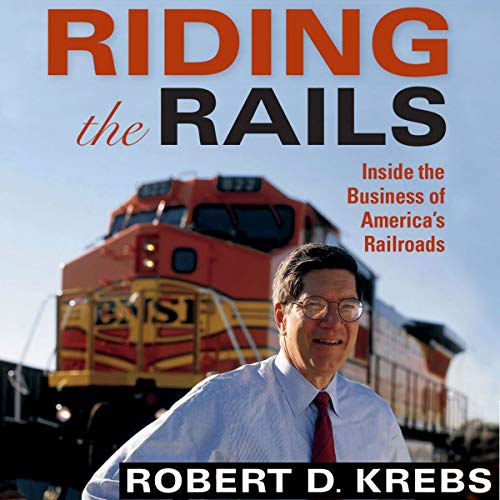 By: Robert D Krebs
Narrated by: David A. Nickerson
Try for £0.00

When Robert D. Krebs joined the ranks of Southern Pacific Railroad in 1966, the industry had been in decline for decades, and the future of trains was in peril. Despite these obstacles, Krebs fell in love with the rugged, competitive business of railroads and was determined to overcome its resistance to change and put rail transportation back on track.

By the age of 40, Krebs was president of the Southern Pacific Railroad and went on to lead both the Santa Fe Railway and Burlington Northern Santa Fe Railway companies. Riding the Rails: Inside the Business of America's Railroads details Krebs' rise to a position of influence in the recovery of America's railroads and offers a unique insider's view into the boardrooms where executives and businessmen reimagined transportation in the US.

What listeners say about Riding the Rails

A Great Memoir of a Railroad CEO

As an engineer for BNSF, I found this book to be very fascinating learning the inside story of how the BNSF was formed and the inner workings of running a freight railroad. I really enjoyed hearing Krebs talk about his humble beginnings at the SP and working his way up the ranks. A really great read.

Whether a fan of railroads or business icons, a riveting read

The sort of depth, detail and insight one on the outside can rarely get a glimpse of, much less an introduction. A can’t put down walk along the epicenter of American rail transport.

The only curious note was the mistaken assessment of the potential for BNSF/CN.

Great back story on our rail system

Story was very well narrated and informative. Nice back history about how our major railroads came to be.